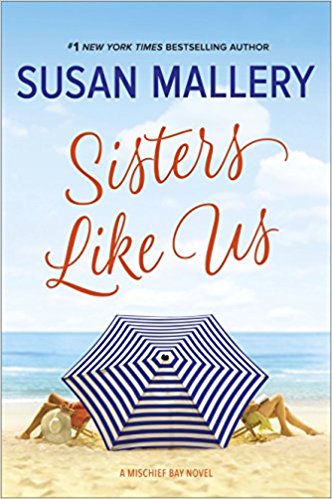 Divorce left Harper Szymanski with a name no one can spell, a house she can’t afford and a teenage daughter who’s pulling away. With her fledgeling virtual-assistant business, she’s scrambling to maintain her overbearing mother’s ridiculous Susie Homemaker standards and still pay the bills, thanks to clients like Lucas, the annoying playboy cop who claims he hangs around for Harper’s fresh-baked cookies.

Spending half her life in school hasn’t prepared Dr. Stacey Bloom for her most daunting challenge—motherhood. She didn’t inherit the nurturing gene like Harper and is in deep denial that a baby is coming. Worse, her mother will be horrified to learn that Stacey’s husband plans to be a stay-at-home dad…assuming Stacey can first find the courage to tell Mom she’s already six months pregnant.

Separately they may be a mess, but together Harper and Stacey can survive anything—their indomitable mother, overwhelming maternity stores and ex’s weddings. Sisters Like Us is a delightful look at sisters, mothers and daughters in today’s fast-paced world, told with Susan Mallery’s trademark warmth and humor.

The men in this story revolve around the women. One of the men definitely believes that he’s a planetary body in his own right, and that some of the Bloom women are his satellites, but he is so, so wrong.

Harper and Stacey are in their late-30s, and they are certainly opposites. But then, they always have been. Harper became the perfect Ms. Susie Homemaker, just as their mother Bunny wanted. But Harper can’t please her hypercritical mother, no matter how much she overdoes.

And it’s overdoing that she no longer has time for. Harper’s marriage failed, leaving her to raise her daughter Becca mostly alone. With no training for any regular job, Harper has turned her super-organized, super-crafty, super-creative energies into her own Virtual Assistant company – but it isn’t quite working. She needs a not-so-virtual assistant of her own to manage her over-scheduled time and keep her from undercutting her own worth.

She already has her mother for that.

Stacey, on the other hand, is happily married, six months pregnant, and scared to death to tell her mother. If Bunny has been hypercritical of Harper’s perfect Ms. Susie Homemaker personality, she has been even more censorious of Stacey’s success as a molecular biologist. As far as Bunny is concerned, there is something wrong with Stacey and her laser-focus on her career. Actually, as far as Bunny is concerned, Stacey is just not normal and she’s not shy about letting Stacey know that at every opportunity.

But Stacey and Harper have always supported each other, possibly as a result of being united against the common enemy – their mother.

Standing together, just like they always have, helps them both find a way forward. With just a little help from their friends.

Escape Rating B: I absolutely adored Stacey. I completely understood her focus on her career, her fascination with her work, and her extreme social awkwardness. She was a character I could really relate to.

At the same time, while Harper’s Ms. Susie Homemaker shtick would drive me crazy, her courage at starting her own business and the way that the desire to please that had been ingrained in her (by her mother) kept holding her back, also felt very familiar.

And I totally envied Stacey her close relationship with her grandfather the astronaut, and how that relationship didn’t just change but absolutely made her life. (I have a thing about the space program)

Even Becca’s trials and tribulations felt real and familiar, even though it has been a very long time since I was a teenager.

This is, of course, leading up to a great big BUT. I hated Bunny. She set up both of her daughters for failure, and continued to reinforce those feelings of failure at every turn. Whenever she appeared in the story I wanted to cringe. The terrible mother seems to be a stock character in women’s fiction, and it’s not a stock character I ever enjoy seeing.

(Yes, Bunny reminds me of my own mother, and right now I have enough unresolved feelings in that direction to fill my own book. Seeing those feelings reflected in fiction was a bit cathartic, but also quite annoying the longer it went on. Your reading mileage may vary.)

Harper and Stacey’s stories, while complicated by Bunny, also do a marvelous job of showing a range of women’s choices and how they can go both right and wrong. But mostly right. Stacey’s husband Kit in particular is a real gem of a husband and a great character. As is Harper’s business partner Dean.

Harper’s ex-husband is more than a bit of a tool, not surprising. But so is Lucas, the man she finally falls for. The difference is that Lucas gets better – even if he doesn’t grovel nearly enough. Still I liked the way that their romance does not become the focus of the story, and that Lucas forges a friendship with Becca separate from whatever relationship he does or does not have with Harper.

In the end, a good time was had by all, and I liked both Harper and Stacey and really enjoyed seeing them both figure out their lives.

3 thoughts on “Review: Sisters Like Us by Susan Mallery”