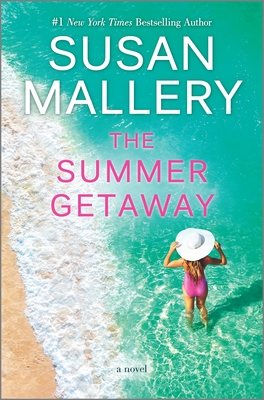 "The perfect escape for readers wanting to get away."—Booklist
One woman takes the vacation of a lifetime in this poignant and heartwarming story about the threads that hold a family together from #1
New York Times


bestselling author Susan Mallery.
Single mom Robyn Caldwell needs a new plan for her future.  She has always put her family first.  Now, with her kids grown, she yearns for a change. But what can she do when her daughter has become the most demanding bride ever, her son won’t even consider college, her best friend is on the brink of marital disaster and her ex is making a monumentally bad decision that could ruin everything?
Take a vacation, of course. Press reset. When her great-aunt Lillian invites her to Santa Barbara for the summer, Robyn hops on the first plane to sunny California.
But it’s hard to get away when you’re the heart of the family. One by one, everyone she loves follows her across the country. Somehow, their baggage doesn’t feel as heavy in the sun-drenched, mishmash mansion. The more time Robyn spends with free-spirited Lillian, the more possibilities she sees—for dreams, love, family. She can have everything she ever wanted, if only she can muster the courage to take a chance on herself.

No matter where you go, there you are. But when Robyn Caldwell decided to take a break from, well, her life, she didn’t expect for all of the people in her life to end up there with her.

While a part of me wants to say that Robyn is at a crossroads, it feels a lot more like Robyn has let herself be sucked into a whirlpool – and now she’s drowning. She’s in over her head and sinking fast under the weight of everyone’s expectations, including her own.

She’s just been hit upside the head with the realization that she’s the person who allowed it to happen. And that her circumstances changed – not recently but four whole years ago. That she literally can’t afford to continue drifting through her own life while giving in to all the demands that everyone around her seems to dump on her with abandon – knowing full well that she won’t abandon them.

Even though she needs to abandon something before her own personal ship sinks without a trace.

Robyn, for better and often for worse, is a fixer. She tries to make everyone around her happy. This means that she puts herself last – if she considers herself at all. And she has finally come to the realization that she has to stop.

Robyn is 42. She’s been divorced for four years and she’s glad she stopped forgiving her ex-husband for his lack of consistency, lack of commitment, and absolutely total lack of fidelity. Although she’s still been making up for his shortcomings when it comes to their two adult-ish children.

And that’s where Robyn’s life turns into an entire herd of drama llamas. A herd that she has finally decided not to keep feeding, caring for and especially not cleaning up the poop.

Her son has just graduated high school. According to the terms of her divorce, she has six months to either sell the house or buy her ex-husband out. To the tune of $2 MILLION DOLLARS or thereabouts. And that’s the reckoning that has come due. She hasn’t saved money from her settlement since her divorce. That settlement only has six years left to run. She has a part time job that doesn’t pay nearly enough for the lifestyle she became accustomed to.

She has to sell the house. She’s fine with selling the house. She never did like the damn house. But her daughter, planning to get married next year, has her spoiled little heart set on getting married in the backyard of the house – and throws a temper tantrum worthy of a two year old about it.

Just thinking about how weird her daughter’s wedding is going to be – no matter where it’s held – along with her daughter’s drama, her son’s seeming failure to launch, her ex-husband still expecting her to clean up his messes, and her own looming financial crisis gives Robyn the urge to run away from it all.

So she does. Only to have all of it follow her across the country from Naples Florida to Santa Barbara California – dragging every single one of their drama llamas behind them.

Escape Rating B+: It’s hard not to start any description of Robyn’s trials and tribulations without wanting to end it with “and a partridge in a pear tree.” Not because this is a Christmas story, but because of the way the drama llamas keep piling on. And on. And ON.

But I was reading this – several other books – during a 12-hour layover in a rather small airport and it was diverting and absorbing and took me very far away from the extremely uncomfortable seat I was stuck in. So while The Summer Getaway does make its way a bit into farce – it’s a very enjoyable one – particularly as it’s happening to somebody else.

The idea of getting a do-over at midlife, which is essentially what Robyn is considering, is a compelling one. Her children are mostly grown. She’ll always have a place for them, but they’re moving out into their own lives – whether or not she believes their choices are the right ones. She’s finally reached a point where she acknowledges that their choices are theirs – and that hers are HERS.

Her great-aunt in Santa Barbara, the woman who has always been her rock and her safe space, is 94. Aunt Lillian may be a healthy 94, but she’s all too aware that her time is running out. She needs to finalize arrangements for what happens after – to her palatial but extremely quirky house, to her beautiful collections of so many priceless things – including her 15 cats. And to the people that she loves, especially Robyn and her children.

Along with making sure that the house will be in good hands with her husband’s chosen heir for the place, a great nephew that she’s been corresponding with for over a decade but never met. It turns out that Mason is a wonderful person to care for her late husband’s legacy. He might just be perfect for Robyn as well – if they can both manage to get out of their own way.

The Summer Getaway is the story of a summer when everything changes. For Robyn, for her children Harlow and Austin, for Mason, and for all the people attached to all the drama that invite themselves to follow Robyn along her way.

Everybody manages to grow up – at least a bit. Except the cats, because cats are always perfect just as they are. Just ask all 15 of them!