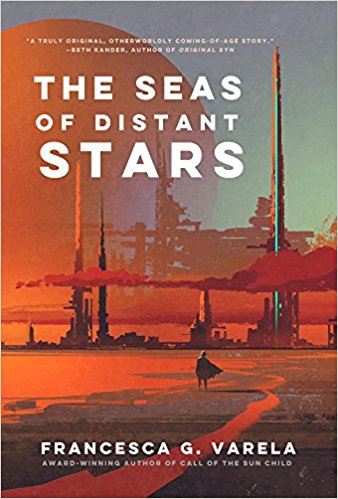 Agapanthus was kidnapped when she was only two years old, but she doesn’t remember it. In fact, she doesn’t remember her home planet at all. All she knows is Deeyae, the land of two suns; the land of great, red waters. Her foster-family cares for her, and at first that’s enough. But, as she grows older, Agapanthus is bothered by the differences between them. As an Exchanger, she’s frail and tall, not short and strong. And, even though she was raised Deeyan, she certainly isn’t treated like one. One day, an Exchanger boy completes the Deeyan rite-of-passage, and Agapanthus is inspired to try the same. But, when she teams up with him, her quest to become Deeyan transforms into her quest to find the truth―of who she is, and of which star she belongs to.

What if all, or at least some, of the alien abduction stories that regularly show up in some of the more, lurid tabloids were really true?

That’s just a small part of the premise of The Seas of Distant Stars, which combines that alien abduction scenario with a coming of age narrative and a search for identity in some interesting ways.

Agapanthus (born Aria on Earth) doesn’t really remember her home. After all, she was only two years old when she was taken.

But this isn’t the usual kind of alien experimentation story either. Agapanthus is being raised on Deeyae, among an offshoot of the human race who seem to have been seeded on a heavy gravity world with two suns.

She’s the foster child of a typical Deeyae family, loves her foster parents, and wants to follow in their footsteps – but she knows she can’t. She’s an Exchanger. It is believed that the parents of Exchangers willingly give them up for an unpredictable number of years in order to reap the benefits that will accrue to their less well-developed world.

Of course it’s all a lie, but we see this story from Agapanthus’ perspective, and at age four, six, eight, even twelve she’s not aware of the contradictions inherent in the story. Even her foster parents seem to believe a good bit of it.

And Agapanthus does get experimented upon, but it seems to be fairly benign. Exchangers are used to test new drugs, new treatments and new procedures, but Agapanthus is never harmed by the process.

Of course, she’s also very lucky. She is far from the only Exchanger on Deeyae, and not all Exchangers are fortunate to be placed with foster-families that care for them.

But as Agapanthus nears adulthood, the contradictions that restrict her life chafe and scrape. She can never become fully adult on Deeyae, but she can’t leave unless the “Gods” allow her to. She is looked down upon by most people, considered weak and ugly and childish. She cannot have a career – she will always be dependent on someone else.

She can’t make her own choices, and she is all too aware that she will always be a second-class citizen. And yet, becoming an adult on Deeyae, in spite of her limitations and restrictions, is what she strives for.

When she succeeds against all the odds, it is all taken away from her. Or is it?

Escape Rating B: While The Seas of Distant Stars is unquestionably science fiction, with its point of view character so very young for much of the narrative, it also feels like more of a young adult book than an adult book.

The story revolves around Agapanthus’ and later Aria’s search for identity. On Deeyae she is an Exchanger, and can never be more than she is. But when she is returned to Earth, she is equally out of place. She remembers her childhood and adolescence on Deeyae, even though she is not supposed to. She has to learn all over again how to function in this society that she does not feel part of.

Her Earth family, with their lost member now returned to them, is just as broken as it was when she was gone, but in completely different ways. The road back is difficult for all of them, and when the story ends they are still on that road.

This is a slow-building, slow-burning kind of story, as we see both worlds entirely through Aria’s eyes. On Deeyae, we learn and understand as she does, following her through the years of her childhood. On Earth, her reintegration into her birth world is equally slow, and in some ways more painful, as she is now aware of what she left behind.

But in the end, she is finally able to choose where and how she belongs.

2 thoughts on “Review: The Seas of Distant Stars by Francesca G. Varela”