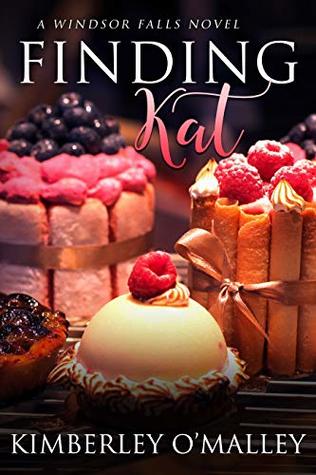 Kat De Luca loves her family, and working in their bakery, but wants something more, something different. Sebastian Walker, local Cardiologist, grew up in the ultimate dysfunctional family. He can’t imagine why Kat wants to change anything about her life. Can she make him understand? Will he accept what she wants? Will their sizzling attraction be enough to overcome their differences?

Kat De Luca grew up in a small town, with an Italian family rich in history and tradition. She’s part of the fourth generation of her family to operate the best (only?) bakery in Windsor Falls. Her father, the current patriarch, is…  well, that’s complicated. We’ll get to him in a minute. And one early morning, Kat’s making bread and treats, and in walks – him.  Sebastian Walker, she’ll come to find out, who is a cardiologist and the best friend of the person who is marrying Kat’s best friend.  Katie’s been trying to set them up, but they both are decidedly single, and not overly inclined to change that. But wow, this guy is hot. He comes around again a few days later, when Papa is there, and things get crazy in a big, big hurry.

Escape Rating: A: Overall, I liked this story. I grew up in small-town America, and understand some of the pressures that come with it – everyone knows pretty much everyone, and there is often only one provider for any given service in town, so if you need that service, it is helpful to stay on good terms with that provider. Kat’s reluctance to admit the hots she has for the handsome Sebastian is, to my mind, quite sensible: doctors can’t always be there for you, as patients’ needs can get in the way, and, well, he’s her father’s cardiologist, after all, and is the best friend of the man who is marrying her best friend. If either relationship fails, drama a-plenty would be afoot, and that’s all best avoided. Isn’t it?

For his part, formerly confirmed-bachelor Sebastian just isn’t really all that interested in commitment, or hasn’t been in the past, anyway. But Kat is just different, somehow, and it takes our handsome hero a bit to figure it out. Sebastian and Kat join Katie and her beau Flynn when the couple-to-be decides to elope. Flynn’s family’s got big money, so off they go in a private jet for a few days in the Caribbean, and a hasty wedding. And the sparks start for our pair, of course. Nothing like sand and sea and no day-to-day worries to get the…erm…juices flowing, so to speak.  Ahem. This section of the story provides some lovely steam, explicit but not at all tawdry. The encounters are unfortunately brief, but quite intense for all their brevity.

I had some concern for a bit about Kat’s career path, and how that would influence things in her relationships with both her father and Sebastian; indeed, her father’s intransigence is a major driver of this story, as he’s just not having her innovate the way she wants, “betraying” him by baking something that’s not in the family tradition. Now, before you jump on me, I’m not knocking tradition. There’s always room for tradition, and if the little family bakery near my home ever stopped making their jalapeño, sausage, and cheese kolaches the way they’ve always done, I would cry. A lot. But Kat’s not asking to stop baking the traditional goods. After all, they’re still wildly popular! She’s wanting to add to the business by trying new things, in addition. But dear old Papa just isn’t having it. I found him to be a frustrating figure, and the closest thing this story has to an antagonist.

I’ve seen a lot of romances that involve the breathtakingly wealthy, and a lot where it’s regular, everyday folks, but this one gives us a healthy shot of the best of both. I hope you’ll find it an enjoyable, easy read, as I have.

One thought on “Guest Review: Finding Kat by Kimberley O’Malley”