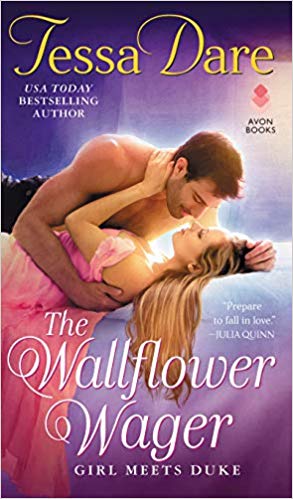 To an undaunted wallflower, he's just the beast next door.

Wealthy and ruthless, Gabriel Duke clawed his way from the lowliest slums to the pinnacle of high society—and now he wants to get even.

Loyal and passionate, Lady Penelope Campion never met a lost or wounded creature she wouldn’t take into her home and her heart.

When her imposing—and attractive—new neighbor demands she clear out the rescued animals, Penny sets him a challenge. She will part with her precious charges, if he can find them loving homes.

Done, Gabriel says. How hard can it be to find homes for a few kittens?

And a two-legged dog.

And a foul-mouthed parrot.

Easier said than done, for a cold-blooded bastard who wouldn’t know a loving home from a workhouse. Soon he’s covered in cat hair, knee-deep in adorable, and bewitched by a shyly pretty spinster who defies his every attempt to resist. Now she’s set her mind and heart on saving him.

Not if he ruins her first.

In the spirit of, “If you give a mouse a cookie…” If you smuggle a hedgehog into a ballroom, you end up with a parrot as the Greek chorus for your romance.

To be fair to the mouse – not to mention the hedgehog and the parrot – in the case of The Wallflower Wager it’s a very good cookie!

The Wallflower Wager is the third book in the Girl Meets Duke series as well as a slightly different twist on the assumptions that the reader is led into by the series title. 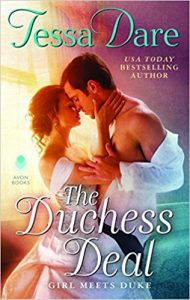 While I haven’t read the first two books, The Duchess Deal and The Governess Game (which didn’t affect my enjoyment of The Wallflower Wager in the slightest), they are what the series title leads the reader to believe, that a girl meets an actual Duke, they fall in love in spite of society and whatever else stands in their way, and reach a blissful HEA.

Lady Penelope Campion does meet a Duke, but he’s not a Duke. Mr. Gabriel Duke may be both rich and infamous, but while he holds the sobriquet of the Duke of Ruin, at least according to the scandal sheets, he isn’t part of the aristocracy at all.

Even though he holds entirely too many of their “vowels” – those vowels being I, O and U.

His most recent acquisition through ruination is the house next door to Penny’s. And she’s part of his financial equation. Which gives her more cards in the game than she currently feels that she possesses.

The house he has acquired, while not a wreck, needs a heck of a lot of work, as its previous owners descended well into genteel poverty before he bought up all their outstanding debts – and called them in.

His plan is to renovate the house and sell it at a considerable profit. The presence of an actual Lady, an Earl’s spinster daughter, next door is sure to increase the value of the address.

Until he sees Penny walking her goat in the square. A goat, along with the rest of her considerable menagerie, will downgrade the value of the property, and the Duke of Ruin isn’t having that.

What he wants to have is Penny. As close as possible. Perhaps with a fewer animal companions – at least in bed. Or in labor. Or sneezing bovine sneezes at him.

Will Penny give in to his charms – or will he give in to hers? Or will they both admit that what they really want is exactly what that parrot has been asking all along? 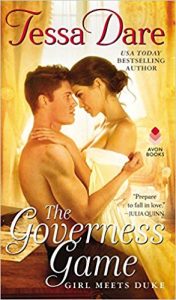 Escape Rating B+: The Wallflower Wager is a delightfully frothy romp from beginning to end, with just enough bitter mixed into the confection to make the treat really, really sweet.

Lady Penelope Campion is the wallflower of the title, and in spite of all of Gabriel’s plans, this is her story. She begins as more than a bit of a misfit, keeping a menagerie of hard-luck animals in her London house.

But it isn’t really her house. Even at 26, she isn’t in control of her own life or her own fortune. Her brother can, and does, order her around. His current order is that she give up all her animals and move back to their country house. A prospect that she absolutely dreads, and with good reason.

Her only chance is to prove to the satisfaction of both her brother and her aunt that she is benefiting from being in town. By their definition of benefit – meaning that she is part of society as she is (literally) entitled to be and has prospects for marriage.

That’s where Gabriel comes in. He needs her to stay in the city, so he can use her presence as a selling point for the house. She needs his help in reducing her animal population by finding them good homes – and getting her into the society columns enough to keep her relatives at bay.

What adds just enough of that bitter to the sweet of this story is the way that they work to overcome their own self-doubts and let go of the fears that hold them back – not just from each other – but from experiencing life to its fullest.

Gabriel can’t manage to silence the voice of the guttersnipe that he used to be. He knows that society doesn’t believe that he’s worthy of Penny, or honestly of the slightest consideration that his money can’t buy. And he believes that voice.

Penny’s trust was stolen – make that groomed away – when she was a child. She doesn’t believe that she’s lovable or salvageable because society has taught her that her innocence is all that she is valued for. An innocence she no longer has.

Discovering that they deserve each other, and the happiness that they can have together, makes this book special – and fun. That certain bastards get everything that’s coming to them is icing on this very sweet and tasty cake of a story.

This is one of those romances where nobody’s perfect, but they discover that they are just perfect for each other. And this book is just perfect for those days when the darkness of real life gets too deep and you really, really need to mix in a bit of bubbly froth to help you see the bright side of everything.

Or just listen to that parrot.

I’m giving away a copy of The Wallflower Wager to one very lucky US/CAN winner. You’ll get to find out what the parrot says!

14 thoughts on “Review: The Wallflower Wager by Tessa Dare + Giveaway”