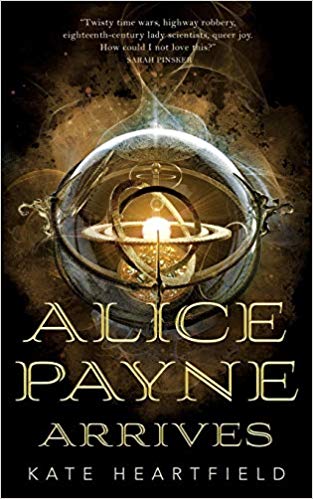 A disillusioned major, a highwaywoman, and a war raging across time.

It’s 1788 and Alice Payne is the notorious highway robber, the Holy Ghost. Aided by her trusty automaton, Laverna, the Holy Ghost is feared by all who own a heavy purse.

It’s 1889 and Major Prudence Zuniga is once again attempting to change history―to save history―but seventy attempts later she’s still no closer to her goal.

But in 2020 the Farmers and the Guides are locked in battle; time is their battleground, and the world is their prize. Only something new can change the course of the war. Or someone new.

Little did they know, but they’ve all been waiting until Alice Payne arrives.

And wibbly-wobbly timey-wimey bits have a way of biting everyone in the ass – every single time.

Time travel has always been an irresistible idea for SF and other genres to play with and things always seem to turn out alright in the end. For values of “alright” that seem to be relatively definable. Or at least reasonably fixable.

The time travel in Alice Payne’s version of history – or rather versions of history – turns out to be not nearly so simple. Or half so easily fixable. And it makes so much sense – in a really, really horrible sort of way.

It all goes back to that road to Hell and those good intentions. Mostly.

Some of the damage is already present. From the perspective of the future, global warming and a whole bunch of other crap that we’re already dealing with has sent the planet into a state of anarchy by the time that time travel is invented.

And then there was bureaucracy – a hell in itself – but a hell created with the noble goal of going back in time to make things better. The problem with that little idea is “who decides”? One person’s meat is another person’s poison. One person’s better is someone else’s worse. Not to mention that there is no universal definition of “better”. We all think we know, but the devil is in those terrible details. Which leads, directly and inexorably, to rival factions of time travelers – or perhaps that should be time meddlers – who are just absolutely certain that their way is the right way.

Also, there’s the issue that every writer of alternate history runs into. Once you flap the butterfly’s wings in a different direction or a different rhythm, the changes ripple out forever and in ways that were never expected. A change that looks good at the outset may lead to terrible consequences later.

“Millions will die who did not die in what would have been our history.” If that line sounds familiar, it’s what Spock tells Kirk in the TOS episode The City on the Edge of Forever when he realizes that the woman Kirk loves, the woman at the foundation of a peace movement, has to die so that her peace movement doesn’t delay the entry of the U.S. into World War II – allowing Hitler to rise to global dominion. The peace movement looked like a wonderful thing – and in another time and another place it might have been. But there and then the immediate good thing led to a terrible consequence. And the needs of the many always outweigh the needs of the few or of the one.

Prudence Zuniga in 2070 believes that it all has to end. That every attempt to change history “for the better” is only making things worse and rippling that worse further back into history. That it’s time to end the tinkering, let the chips fall where they may, and move forward and only forward into a single future – whatever it might be.

Not that she’s not going to make one last play to make sure that her faction of the history changers wins the “History Wars”. She just needs one person in 1788 to fix a few last minute details.

She plans to involve a tinkerer, but ends up with a highwayman – or rather a highwaywoman, Alice Payne. So Prudence changes her plans – just a bit. And finds herself in the midst of that old dilemma, the one about the problem with changing things is that things change.

Escape Rating B: Alice Payne’s ride has echoes and origins in many time travel stories, from Doctor Who to The Chronicles of St. Mary’s to The Anubis Gates to The Doomsday Book and To Say Nothing of the Dog. But Alice Payne isn’t nearly so lighthearted as that dog.

The difference is that most of those stories try their damnedest not to change the history they explore. They kind of operate on a temporal version of the Prime Directive – to add in another Star Trek reference. They are trying NOT to change things and they do worry very much about the ‘grandfather paradox’.

What makes Alice Payne’s, or rather Prudence Zuniga’s, story feel so probable in its improbability is that no one is careful. It feels all too true to human nature that if the capability of time travel existed that it would be abused and only make things worse.

The story feels like it is set up to parallel the situations of Alice Payne and Prudence Zuniga. While the series is named after Alice, it feels like it is as much Prudence’s story – and more about Prudence’s time(s) and the mess that the world has gotten itself into than it is about Alice.

At the same time – so to speak – as a character Alice has more drive and ambition. And we get more inside her head – possibly because it’s a much less convoluted place that Prudence’s. After all, Alice knows who she is and what she’s doing and as far as she knows that doesn’t change. She’s in the late 1800s doing the best she can to hide her love for her friend Jane, dodge the amorous attentions of several disgusting men AND keep her family’s house halfway livable and her father out of debtor’s prison by posing as a highwayman and robbing the coaches of the aforementioned disgusting men. 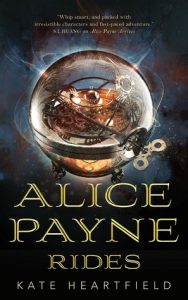 Prudence is trying to stop time travel. Alice’s story is easy. It takes the reader a while to understand why Prudence feels like she needs to essentially commit treason – and we get enough to grasp what’s wrong by the tip of our reading fingernails without understanding it in quite as much depth as I’d like. The ending felt both a bit rushed and a bit of a tease for the next book in the series.

I’m quite teased. I’ll definitely be back to see where Alice Payne Rides take her – and us – next.