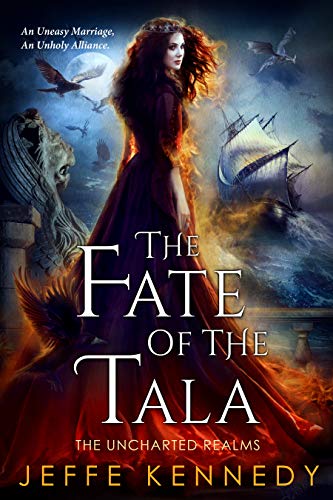 An Uneasy Marriage,
An Unholy Alliance.

The tales tell of three sisters, daughters of the high king. The eldest, a valiant warrior-woman, conquered her inner demons to become the high queen. The youngest, and most beautiful outlived her Prince Charming and found a strength beyond surface loveliness.

And the other one, Andi? The introverted, awkward middle princess is now the Sorceress Queen, Andromeda—and she stands at the precipice of a devastating war.

As the undead powers of Deyrr gather their forces, their High Priestess focuses on Andi, undermining her at every turn. At the magical barrier that protects the Thirteen Kingdoms from annihilation, the massive Dasnarian navy assembles, ready to pounce the moment Andi’s strength fails. And, though her sisters and friends gather around her, Andi finds that her husband, Rayfe, plagued with fears over her pregnancy, has withdrawn, growing ever more distant.

Fighting battles on too many fronts, Andi can’t afford to weaken, as she’s all that stands between all that’s good in the world and purest evil.

For Andi, the time to grow into her true power has come. . .

Once upon a time, there was a story about three sisters. The daughters of a mad king and his foretold (and foretelling) queen. But soothsayers, especially true ones, always fare badly – just ask Cassandra. In the end, Queen Salena went mad and died, before her time but not before she had fulfilled her purpose.

Once upon a time, even longer ago than the first story, there was a story about an innocent young woman, betrayed by her parents, abused by her husband, and saved by her baby brother with a little bit of help from a warrior priestess.

The story of those three princesses, the sorceress Andromeda, the beautiful Amelia and the warrior Ursula, was told as the three parts of The Twelve Kingdoms, where Andi was swept away by a sorcerer king, Ami loved and lost her prince charming, and Ursula took her father’s throne as well as his life.

Through all of their trials and tribulations, the sisters fought against the dead minions of the Priestess of Deyrr, and the machinations of the voracious Drasnarian empire.

That young abused woman was once a Drasnarian princess. She escaped and fled to a faraway land where her former family could not reach her – not through the ranks of the elephants who came to guard her and the people she came to call hers. Her story was told in the Chronicles of Drasnaria.

But the baby brother who helped rescue his sister the former Drasnarian princess grew up to become the mercenary leader who captured the heart of the Warrior Queen Ursula, tying the two stories, and all of their peoples, together.

Throughout the followup to The Twelve Kingdoms, The Uncharted Realms Andi, Ami and Ursula, now queens with lands of their own to rule, found themselves fighting the deeply entrenched tendrils of that High Priestess they first defeated in their father’s throne room.

The Fate of the Tala is the climax to this entire 12-book saga, and it is an epic and stunning conclusion to everything that has come before it.

The series ends, as it began all the way back in The Mark of the Tala five years ago, with the magical kingdom of Annfwn, once the tiny keeper of all of the magic in the world. Andi married Rayfe, the King of Annfwn, to protect the precious heartstone that controlled that magic. A control that has been under attack since long before the sisters were born. An attack that their birth was intended to finally defeat.

If they can. If Andi can let herself embrace all of the power that could be at her command, without giving way to the doubts and fears that have plagued her all her life. And without giving in to the insidious voice of the High Priestess who has planted so many of those fears in order to exploit them now, at the climax of it all.

But the visions of the future that Andi has seen show her the defeat of all she loves and the loss of all she holds dear. She fears can only save the kingdoms only at the cost of her heart and soul. A cost that she only thinks she is willing to pay.

Escape Rating A+: The Fate of the Tala is the shattering conclusion of an epic long in the making – and the reading. And as the conclusion of such an epic, the depths of which I have barely hinted at above, it needs to be read as the conclusion to either a long and lush reading binge or, as I did, years of waiting with bated breath for the next installment in the series.

One of the things that I love about this series, and this is every bit as true for this entry as the others, is that these women, their stories, their kingdoms, their worlds, are complex and beautiful and sometimes terrible in that beauty. Many of their stories walk through very dark places, and we feel their pain, deeply and even heartbreakingly.

So it is in The Fate of the Tala. Andi is assaulted on all sides by the fears that have plagued her all her life – and those fears are so very real. She is pregnant and fears that her husband no longer loves her, wants her, or values her as a partner. She knows that they were fated to marry, whether they loved each other or not, and while she has come to love him desperately it seems that his mask of caring has slipped.

More importantly, he no longer seems to trust her as his co-ruler, meaning that she cannot trust him as hers. Their kingdom, their world is in a desperate fight for its life, a fight that is centered on their kingdom. The division at their very heart could be the crack that destroys them all.

As readers, we can see what is wrong, and we both empathize with Andi and desperately want her to be able to repair the breach, even as we understand that she must do what is right for her people above all, and that the breach may not be repairable – and neither may be her marriage or her husband. And yet she shoulders on.

At the same time, this is also a story about desperation and struggle and hope and fear and pulling together against all the odds. And it’s a story about finding sisterhood and family and hope in even the darkest and most desperate of times.And that last stands do not have to be the last – or actually even a stand, and that sometimes the way to win it all is to let it all go.

If you love fantasy romance and/or epic fantasy tinged with romance, you owe it to yourself to begin with The Mark of the Tala and immerse yourself in a beautifully created and fantastically detailed world. This series is epic in scope and marvelous in detail. If you’re looking for a sweeping heroines’ journey this series can’t be beat.

Although I’d love to see the author try, with more heroines and even more fantastic worlds.

A Rogue by Any Other Name
Review: I Own the Dawn by M.L. Buchman
Review: Tarnished by Karina Cooper

One thought on “Review: The Fate of the Tala by Jeffe Kennedy”