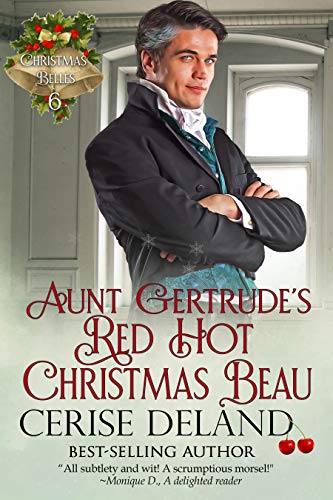 When The Countess of Marsden throws a house party, she expects to marry off her family and friends. Never herself. Not at her age!

At the Countess of Marsden’s house party, she plans to marry off her family and friends. But when the Duke of Harlow strides into her bedroom on Christmas Eve, Gertrude’s ready to continue the charming affair they began last summer. Even though she’s a lady of a certain age. Even though she’s never loved any man other then her dear departed husband!

Harlow’s enchanted by Gertrude. He’s done with mourning—and he’s ready to laugh again! But he wants more than a few nights with her. When he tells her, what will she say?
Can she love him? At his age? Imperfect as he is? Loving her as he does?

I totally bought this one for the cover. And the story. But what initially grabbed my attention was that cover. That picture looked like someone drew John Barrowman as a silver fox, and it’s not a bad look. At all. More than enough to make me give this book a second and third look.

And that’s when I got hooked by the story. There aren’t nearly enough romances that feature couples where both parties are “a certain age”. By which I mean over 40. (If you want a contemporary with this same kind of pairing check out the awesome Royal Holiday by Jasmine Guillory).

Which brought me to Aunt Gertrude and her exceedingly hot beau – and previous fling – the Duke of Harlow.

Gertrude, Countess of Marsden and George, Duke of Harlow have both been widowed, so their fling, while possibly a bit scandalous if anyone found out, didn’t exactly hurt anyone. And it’s entirely possible that Gertrude is past worrying about presenting the Duke with a spare to go along with his 31-year-old heir.

They were, and are, both in a position where they can please themselves with their friendships and liaisons. So they did.

But Harlow, the cad, never wrote to Gertrude after their interlude. Never contacted her. Not out of guilt, but out of pride and an overzealous attention to duty.

Gertrude, on the other hand, isn’t quite so proper. Or stuck on herself. Or simply is more willing to acknowledge that life is too short not to spend as much time as possible with someone who makes you laugh. Especially when that someone can make you breathless in plenty of other ways as well.

She just has to get Harlow off his noble high horse to admit that they can have a beautiful future together. And he has to convince her that the difference in their stations doesn’t matter at this point in their lives, if indeed it ever did.

It all hinges on Harlow getting the stick out of his own arse and realizing that he’s kept his twice-widowed son from the love of HIS life more than long enough.

Escape Rating B+: This one was mostly fluff. And it was wonderfully fluffy. EXACTLY what I was looking for! It’s short and sweet with just the right amount of spice, making it a perfect read for my mood.

I loved that both parties in this romance were older, and the portrayal had a hint of realism about that. Harlow is in his 50s and Gertrude is a few years younger, so late 40s most likely. They both worry about not being what they were in their youth, but are both more than willing to embrace the time they can have together.

I also liked that Gertrude was the one who took the initiative. She wanted to see him, so she invited him to her holiday party and made it very clear in her message that the invitation included her bed.

Gertrude’s frankness did highlight that this takes place before the Victorian era of extreme and false modesty. These events occur in December of 1814, while Napoleon was in exile on Elba. Part of the purpose of her soiree is to allow her nieces to get engaged to their own loves, who have been in France fighting Napoleon for the past several years. Napoleon and the war do cast a bit of a shadow, as we know that while Napoleon spent that Christmas at Elba, he didn’t remain “on ice” on Elba.

Meanwhile, it’s a time of joy that Gertrude is more than willing to add to on her own account, not that she expects an offer of marriage out of it. But she does expect a good time, both in bed and out, with a man she cares for and who makes her laugh and takes her out of herself. And it’s refreshing to read about a woman who knows her mind, her heart, and her libido.

That the whole thing nearly gets derailed by Harlow’s long-standing estrangement from his son adds just the right note of piquancy to a tale that would otherwise be a bit too sweet. That Gertrude helps him understand the errors of his ways, and doesn’t accept a future with him until he both acknowledges and redeems those errors, was a welcome change from so many romances where the hero really screws up and the heroine takes him back without even a proper grovel.

All in all, this was a lovely Georgian-era romp with just the right amounts of sweet, savory and spice to make it a delicious read!