If you have not seen that there will be a full cast recording of the adaptation of the first three books of Neil Gaiman’s awesome Sandman graphic novels, consider yourself told. It’s going to be awesome. And in the ultimate casting against type, Michael Sheen will be playing Lucifer this time, after his turn as the angel Aziraphale in Good Omens. Which was marvelous and we might watch it again. I still need to get around to The Annotated American Gods. One of these days. 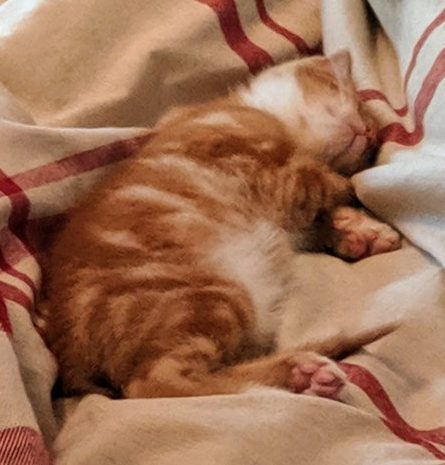 Kitten pic for attention. This is George. He’s 2 months old, give or take. Also utterly adorable with the winsomest face ever. He purrs ALL THE TIME.

For Review:
Axiom’s End by Lindsay Ellis
The Book of V. by Anna Solomon
The Fate of a Flapper (Speakeasy Murders #2) by Susanna Calkins
The Fires of Vengeance (Burning #2) by Evan Winter
The Forgotten Kingdom (Lost Queen #2) by Signe Pike
His & Hers by Alice Feeney
The House of Whispers by Laura Purcell
The House that Fell from the Sky by Patrick Delaney
Invisible Girl by Lisa Jewell
Just Like You by Nick Hornby
The Lies that Bind by Emily Giffin
Murder in Old Bombay by Nev March
The Nothing Man by Catherine Ryan Howard
The Peace Machine by Özgür Mumcu
The Pull of the Stars by Emma Donoghue
The Relentless Moon (Lady Astronaut #3) by Mary Robinette Kowal
Safecracker by Ryan Wick
Shiner by Amy Jo Burns
Survivor Song by Paul Tremblay
The Talented Miss Farwell by Emily Gray Tedrowe
The Three Mrs. Wrights by Linda Keir
The Tourist Attraction (Moose Springs, Alaska #1) by Sarah Morgenthaler
An Unnatural Life by Erin K. Wagner