This week’s stack is surprisingly short. Or small. Or just not very tall. Which gives me a chance to include not just one but two cat pictures, featuring George as a tiny kitten and George just this past week. It is amazing how fast they grow! 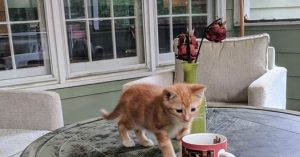 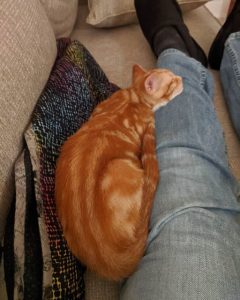 But I do also have books. Ever since Galen played Ghost of Tsushima I’ve been looking for a book with a similar flavor. I read Lian Hearn’s marvelous books (both Tales of the Otori and Tale of Shikanoko) sometime in the way back, and I knew there was another from the same time period – publishing wise – as the Otori but I just couldn’t quite put my finger on it. I’m kind of ashamed of myself now, because it’s the Tomoe Gozen saga and one of the characters in Tsushima was named Tomoe. I should have remembered sooner!

For Review:
The Big Man’s Daughter by Owen Fitzstephen
Glamour Girls by Marty Wingate
In League with Sherlock Holmes edited by Laurie R. King and Leslie S. Klinger
Legacy of Steel (Legacy Trilogy #2) by Matthew Ward
Marion Lane and the Midnight Murder by T.A. Willberg
The Neil Gaiman Reader: Selected Fiction by Neil Gaiman
The Night Will Find Us by Matthew Lyons
The Sentient by Nadia Afifi
Shadows in Time (Kendra Donovan #5) by Julie McElwain
When the Tiger Came Down the Mountain (Singing Hills Cycle #2) by Nghi Vo