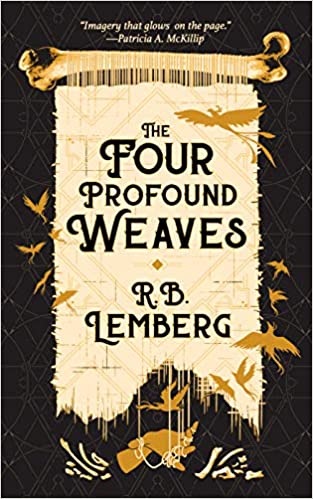 “Thoughtful and deeply moving, The Four Profound Weaves is the anti-authoritarian, queer-mystical fairy tale we need right now.”-Annalee Newitz, author of The Future of Another Timeline
[STARRED REVIEW] “A beautiful, heartfelt story of change, family, identity, and courage.”-Library Journal
Wind: To match one's body with one's heartSand: To take the bearer where they wishSong: In praise of the goddess BirdBone: To move unheard in the night
The Surun' do not speak of the master weaver, Benesret, who creates the cloth of bone for assassins in the Great Burri Desert. But Uiziya now seeks her aunt Benesret in order to learn the final weave, although the price for knowledge may be far too dear to pay.
Among the Khana, women travel in caravans to trade, while men remain in the inner quarter as scholars. A nameless man struggles to embody Khana masculinity, after many years of performing the life of a woman, trader, wife, and grandmother.
As the past catches up to the nameless man, he must choose between the life he dreamed of and Uiziya, and Uiziya must discover how to challenge a tyrant, and weave from deaths that matter.
Set in R. B. Lemberg's beloved Birdverse, The Four Profound Weaves hearkens to Ursula Le Guin's The Left Hand of Darkness. In this breathtaking debut, Lemberg offers a timeless chronicle of claiming one's identity in a hostile world.

The Four Profound Weaves has the feel and the sense of a myth in the making, or perhaps a fairy tale. Reading it has filled my head with a weave of more thoughts – profound or otherwise – than one would think that a book this slim would hold between its pages.

It’s the kind of story that, although I’ve finished reading it, I feel like it hasn’t finished with me yet. Perhaps its that the lesson of the fairy tale is still being absorbed.

On the surface, this is a story about two people who want to be different, or want the world to be different, or both, than they or it is. The initial part of the story is their recognition that they have, in their own completely separate ways, handed control over themselves and the changes they wish to make to others.

The beginning of this story, their initial quest, is to take back that control.

Which leads them, directly and almost inexorably, into the path of a ruler who wants the world and everyone in it to remain unchanged, exactly as they are, precisely as he wills it. And them.

This is a world where, as Emily Dickinson once said, “Hope is the thing with feathers”. But this is Birdverse, where so, also, is death. A place where a master weaver can take them both and weave them together into a cloth, and a song, and change, if not the world, than at least one corner of it.

Escape Rating A-: I’m all over the map about this one. In the end, I loved it, but the beginning was slow. I think that part of that was because this was my first trip to Birdverse, and it took me a while to get my bearings in it.

Also, the story begins slowly because it feels like it is meant to. Both of the protagonists have spent 40 years not living their truths. That’s a long time to wait for anything, let alone wait to fulfill their dreams. But they’ve been holding themselves back, so it seems natural that it would take them a while to get moving toward a future that they’ve been inching towards at a snail’s pace for so many years.

Once they finally begin their journey, it initially seems like a lesson in being very, very careful in what you wish for, because when you get it it isn’t anything like you imagined while you were wishing your life away to get to it.

Which is another lesson.

Both Uiziya and the Nameless Man want to change. And they both want that change to be both accepted and acceptable. The irony is that the people having the most difficulty accepting their changes is themselves.

But the Collector of Izya refuses to accept any change, of anything. And he believes that the only way to protect things from changing is to hide them away where only he can see them. He believes that death is the ultimate preservation. The dead, after all, stop changing.

At the same time, change is itself a death. When something or someone changes, it kills the thing or person that came before, even if, or perhaps especially because, the new thing or person marches on. And continues to change.

As my thoughts about this book kept spinning, the image I was left with was the Tarot card of Death, which represents both death and change. The most familiar rendition of Death in the Tarot is of a skeleton riding a pale horse as it steps over a fallen king. Which feels like a piece of the literal interpretation of this story, that not even royalty can stop change.

But this is a story that feels open to as many meanings as any myth. It’s a story about not just discovering your authentic self, but becoming that self and accepting that self, no matter how much childhood programming, loved one’s attempts to call back your tide, or social opprobrium stand in your way. And no matter how much you stand in your own way.

It’s also a story about the price of change, and the cost of redemption. And that the sins of the past may be halted but not eliminated. And that sometimes that’s all you can do, and that it’s enough.

I think there’s more in this story, and more in Birdverse. I look forward to going back and discovering it.

5 thoughts on “Review: The Four Profound Weaves by R.B. Lemberg”