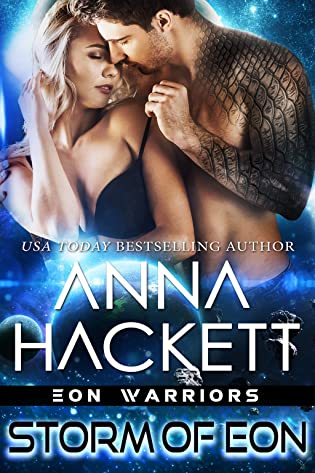 When a Terran weapons scientist finds herself the target of deadly alien assassins, only one fierce alien warrior can keep her safe.
Weapons scientist Dr. Finley Delgado wants to get her new laser defense weapon operational to protect Earth from the insectoid Kantos invasion. She has to make this work. She’s failed in the past and people paid with their lives, and she won’t fail again. What she doesn’t need is a big, brawny warrior that Space Corps orders her to work with getting in her way. Finley wants her solitude, not a massive distraction in the shape of a tall, hard Eon warrior.
Security Commander Sabin Solann-Ath is a warrior through and through, like his entire family before him. He’s disciplined, dedicated, and hiding a dark secret he’d prefer to keep buried. He won’t allow anyone or anything to disrupt his control. When he’s ordered to Earth to help with a secret weapon, he vows to do everything he can to help their allies, even work with a statuesque, prickly scientist. He and Finley get off to a rocky start…but when the Kantos send a team of assassins after Finley, Sabin will do anything to protect her.
Sent to a secret facility deep in the Australian desert, Finely and Sabin are drawn closer and closer. She sees beyond the warrior to the man, and he uncovers a passionate woman. But Finley threatens everything Sabin has fought hard to control, and as they fight off the devious Kantos, they both will face the demons of their pasts.
**Each book in this action-packed science fiction romance series can be read as a standalone.

There’s a very old Terran saying about not judging a book by its cover. But that’s just what Dr. Finley Delgado does when the Eon Warriors come to her research station to “help” her with the defense grid/weapon that she is developing for Earth.

Finley is just sure that the big, brawny Eon Warriors are only going to get in the way of her finishing the project. Even under the best of circumstances, Finley works better alone. Other people, even other scientists and engineers, just can’t keep up with her. Attempting to get them up to speed only slows her down.

And time is of the essence as this seventh entry in the terrific Eon Warriors series begins. The dreaded Kantos are on their way to Earth to strip it like a plague of intergalactic locusts before Finley’s weapon is operational.

Before the Terrans can get fully up to speed on assisting the Eon Empire with wiping the Kantos out of the galaxy.

But the Eon Warriors are all big, brawny and distracting. Finley is absolutely certain that anyone with that much brawn can’t possibly have all that much brain. And she really doesn’t need the compelling distraction from her work that Security Commander Sabin Solann-Ath is going to be.

It’s only after the Kantos send assassins into her highly secured facility with specific orders to eliminate Finley that she is forced to admit that, as much of a distraction as Sabin oh-so-definitely is, he’s also exactly who and what she needs to keep her alive AND help her finish the weapon in time. 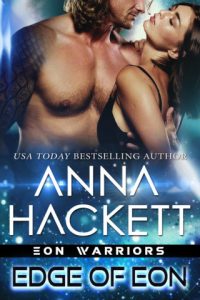 Escape Rating A-: I love the Eon Warriors. Honestly, I at least like all of this author’s work, but her space opera-type science fiction romances have a special place in my heart, and Storm of Eon is no exception.

This series started off with the edge-of-the-seat SFR action/adventure romance of Edge of Eon, and the world developed for this series just gets more fascinating as it goes. (It is possible to read the series in any order, but it’s more fun if you start at the beginning!)

One of the fun things about this series is that there’s just this tiny element of the “Mars needs women” trope that works really well. Not that the Eons are Martians, and not that they actually NEED Earth.

The Eons have been exploring the galaxy for centuries, they don’t need any technological advances from us. But we provide them with a couple of things that their own society seems to have lost along the way.

The Terrans, out of desperate necessity, think outside of a box that the Eons have been contentedly ensconced in for, probably, eons. Their society is a bit on the rigid and stratified side.

That rigid stratification has led to an unfortunate side effect. Eons are only naturally fertile with their fated mates. They’re having an increasingly difficult time finding them – or they were until they met us – so they’ve been making do with test tubes – so to speak. The intermarriages between the Eons and the Terrans, starting at the very top of their society, are changing both worlds.

But this story, like many of this author’s romances, features a desperate fight for survival and a couple of the people fighting for that survival who are also battling an unexpected and initially unwelcome attraction for each other.

Both Finley and Sabin are convinced that they are not worthy of being loved, for reasons that make perfect sense in their respective societies but totally collapse when they meet each other.

It’s easy to understand why Finley has little belief that any man could actually want her. Unfortunately, not just for her but for all of us. Beauty standards for women seem to get narrower all the time, and Finley isn’t petite and willowy and is never going to be. She’s tall and strong and beautifully proportioned for the body that she has. It’s just not the kind of body that is considered to be beautiful

In addition, Finley has the personality of a velociraptor. (Not quite, but close.) The character she seriously reminds me of is Rodney McKay from Stargate: Atlantis. They’re both certified geniuses in multiple fields, neither of them works well with others, they suffer fools not at all, they make their minions cry on a regular basis and they are arrogant and abrasive to the max because they both know that they are the only person who can possibly save the day. Because they have before and will again.

The thing is, all of those characteristics are considered what a genius is due when they are in a male package, but get criticized and beaten down at every turn when a female displays the exact same behavior.

And Finley isn’t willing to be anyone’s pity fuck, no matter how much she’d like Sabin to do her in pretty much every way possible.

Sabin’s problem is a bit different. He’s as handsome – and arrogant and sometimes overbearing – as any of his brethren, but he holds a secret that makes him afraid of any emotional involvement.

His physiological responses to stimuli, to pain and especially pleasure, are too sensitive – and even more so when enhanced by the symbiont that is part of all of the Eon Warriors. It means that Sabin has the equivalent of an addictive personality – just ramped up to the max. He can get lost in any kind of pleasure, whether that’s delicious food, intoxicating drink or drugs, or sex and the endorphins that come from love.

His father became an addict to those sensations, and Sabin is afraid that he’ll go down the same path if he lets himself get involved with Finley.

They are afraid of each other, afraid for each other, and deathly – and correctly – afraid that if they can’t keep their shit together their distraction is going to get a whole lot of people killed. And that even if they succeed in powering up the weapon their careers are going to wrench them apart.

But Finley’s job is to save at least this day for Earth. Even if she has no hope that tomorrow will take care of itself. That Sabin and Finley find a way to each other past their fears makes the romance of this entry in the series every bit as pulse-pounding as the impending Kantos invasion. But a whole lot more fun!

2 thoughts on “Review: Storm of Eon by Anna Hackett”