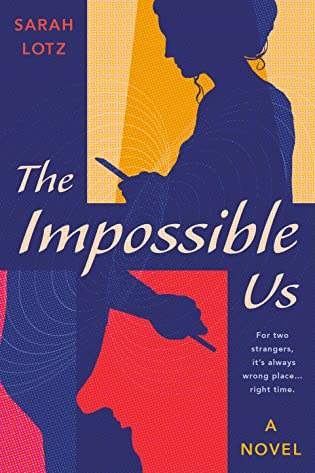 This isn't a love story. This is Impossible.
***
Nick: Failed writer. Failed husband. Dog owner.
Bee: Serial dater. Dress maker. Pringles enthusiast.
One day, their paths cross over a misdirected email. The connection is instant, electric. They feel like they've known each other all their lives.
Nick buys a new suit, gets on a train. Bee steps away from her desk, sets off to meet him under the clock at Euston station.
Think you know how the rest of the story goes? They did too . . .
But this is a story with more twists than most. This is Impossible.

Every once in a while, even in real life, someone will text or call a wrong number, and instead of getting a hang-up or a brush-off, a connection gets made. There’s that famous story about the Arizona grandma who texted a complete stranger to come for Thanksgiving dinner in 2016. He not only came for dinner that year, he and his now-wife are still invited and attending that Thanksgiving dinner every November.

But the connection between Bee and Nick, while it still begins with a text to a complete stranger, has much further to travel, even if they don’t realize it at first.

The hook into this story is the witty and emotionally honest banter between Nick and Bee. Both are well into adulthood if not necessarily adulting, they both have serious shit to deal with and both of them, frankly, are clinically depressed in one way or another.

Bee is avoiding relationships by playing spin the one-night-stand roulette wheel on Tinder. She’s self-supporting, her business of re-purposing used wedding dresses is going gangbusters, and she’s completely alone except for her lifelong friend Leila and her upstairs neighbor. It’s an OK life but she’s lonely.

Nick sees himself as a failure – only because he is. His marriage is dying if it isn’t already dead. His career as a novelist produced one self-absorbed book and nothing since. His only real friends turn out to be his dog, Rosie and his stepson Dylan – because his wife is cheating with his other best friend so that relationship is clearly over.

Until they agree to meet. Under the clock at Euston Station. They both say they’re there, but neither can see the other. And that’s when things go wildly pear-shaped.

Eventually, after railing at each other, cursing at each other, and obsessively reading over their correspondence, they come to the heartbreaking realization that the multiverse is real and that they are not living in the same version of it.

Each of their worlds is the other’s “road not taken”. The worlds aren’t SO different. The divergence isn’t all that far in the past. In Bee’s world Clinton’s two terms were followed by W.’s two terms, then Obama’s two and then, let’s call him The Former Guy.

Nick thought Bee’s reference to The Former Guy as president was a bad joke, because his world split off at the hanging chads in Florida in the 2000 election. Clinton was followed by Gore’s two terms, then Obama’s two terms. His world managed to skip both 9/11 and Brexit. Not that his world is unequivocally better, but it is different in ways that don’t seem too surprising if you remember anything about Al Gore’s political platform.

Accepting that they can’t meet in person, they also decide that the relative closeness of their parallel worlds means that they CAN meet their world’s equivalent of each other. As they discover, however, that just because they can, doesn’t mean they really should.

Escape Rating B: This book is bonkers. Whether that’s a good thing or a bad thing is going to be strictly in the eye of the beholder, and honestly I’m still not sure. It’s a wild ride, but I’m not sure I liked where that ride ended up.

I’m also none too sanguine about labeling this as a romance. An emotional if not physical romance does occur, but there’s no HEA for Bee and Nick. There can’t be and that’s the point of the story. It really is impossible for the two of them to become an “us”.

This is more of a story about that “road not taken”, or an example of the quote from John Greenleaf Whittier, “For all sad words of tongue and pen, the saddest are these, ‘it might have been’.”

Nick and Bee might have been something special, but once they meet their actual doppelgangers in each other’s realities, I’m not so sure. Or I’m not sure that Nick has it in him to find his own happy ending, Bee, who has better coping skills in the first place (admittedly that’s a REALLY low bar to get over) ends the story with at least the possibility of an HEA somewhere down the road.

But this is being marketed as a romance, which is going to lead entirely too many people to pick it up thinking there’s a happy ending, and those readers are going to be seriously disappointed. OTOH, while the SFnal elements are more than enough to push it to SF, the way the doomed romance is centered in the story is going to turn off many of those readers as well. And on my third hand in an alternate universe, although this is SFnal and does center a romance, it doesn’t gel in the right way to make it a science fiction romance, either.

For people who know what they are letting themselves in for, there is plenty of satisfaction to be had on this wild and crazy ride through the multiverse of other worlds, other selves and other lives. Just don’t expect a happy ending.