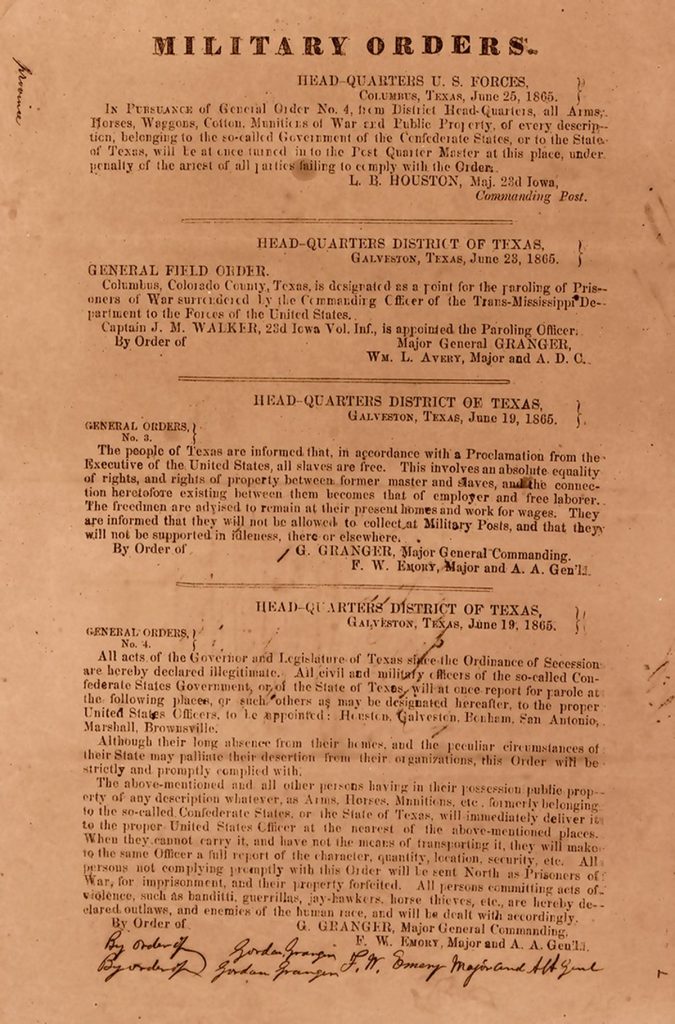 Emancipation from slavery in the United States was a process, not an instantaneous transformation. Consider General Order No. 3 made in Galveston, Texas, on 19 June 1865:

The people of Texas are informed that, in accordance with a proclamation from the Executive of the United States, all slaves are free. This involves an absolute equality of personal rights and rights of property between former masters and slaves, and the connection heretofore existing between them becomes that between employer and hired labor.

By order of Major General Granger

This was of course made well after the Emancipation Proclamation and two months after the formal end of the Civil War. By that point in time, many slaves had been freed and many had freed themselves. All had to grapple with what freedom meant, both abstractly and in very concrete terms: how to keep body and soul together when the harvest waited for no one, the former slave owners largely resisted any fundamental changes to the relations between whites and African Americans, and wartime promises of land came mostly to naught.

In 1873, the New York Times published this piece on successful farming cooperatives organized by former slaves:

Some of the largest plantations in Colleton County, South Carolina, are now owned and successfully conducted by colored people, who have united their resources and combine in their labor. Their manner of operation is thus described by a South Carolina paper: “A number of them, in some cases as many as fifty, form themselves into a society, elect their officers, and adopt by-laws. They have regular meetings, at which the officers report, and a specified amount is paid into the treasury by each member. When sufficient is accumulated in the treasury a suitable plantation is selected and the purchase made; usually the payments are in one, two, or three years, a good portion being paid at the time of the purchase. The land is equally distributed by the officers elected for that purpose among the members of the society, or so much as they may wish to cultivate. Each is free to work as suits him, and each can dispose of his crop as he deems proper. The only thing required is honesty and a prompt payment of all dues, which are usually very light. Any one willfully failing to meet his dues, or convicted of dishonesty, has all amounts previously paid by him for the purchase of the place refunded, and is required to move off the plantation, all his rights and claims having been forfeited.

A sort of rivalry seems to spring up between them, which is productive of economy and thrift. These societies are located in the low country east of the Savannah and Charleston Railroad. We do not presume to say that only the colored people who have formed themselves into these societies show thrift and the accumulation of property, for a number who, six or seven years ago, were not worth a dollar now carry on successfully large rice and cotton plantations, and are becoming heavy tax-payers. But in the particular section in which these societies are formed, more property exists among their members than among those who are now fighting the battle of life and death on their own account, while from the formation of these societies they are enabled to purchase more valuable property and secure greater privileges than they could if each laid his money out in a separate purchase, in which case ten or twenty acres of poor land would be all he would be able to buy, as no planter would consent to cut off and sell small tracts of his best land and retain himself the poorer portion. This is undoubtedly one of the reasons of their success, as on nearly all the plantations in this section a large proportion of the land is almost valueless.

By securing the whole plantation they obtain sufficient good land for their purposes, while he who purchases for himself generally gets such land that it is impossible to make more than a poor subsistence from.

(I first found the news article on the educator resources section of the After Slavery exhibition. A summary of emancipation in Georgia that I ran across can be found here.)

It’s of course easy enough to guess that the co-ops had troubles after the post-Reconstruction imposition of white supremacy in South Carolina in 1876 and beyond, but the specifics are not readily showing up via web searches. The website of the Colleton County Historical and Preservation Society happily mentions that many Tuskegee Airmen trained at an airfield in the county but is entirely silent on post-Reconstruction history.

So my question remains: I wonder what happened to those co-op plantations.