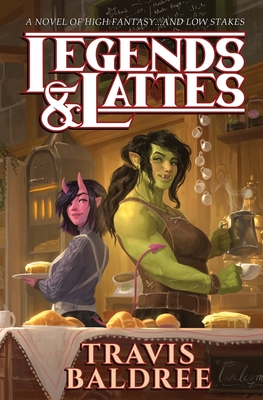 High Fantasy with a double-shot of self-reinvention
Worn out after decades of packing steel and raising hell, Viv the orc barbarian cashes out of the warrior’s life with one final score. A forgotten legend, a fabled artifact, and an unreasonable amount of hope lead her to the streets of Thune, where she plans to open the first coffee shop the city has ever seen.
However, her dreams of a fresh start pulling shots instead of swinging swords are hardly a sure bet. Old frenemies and Thune’s shady underbelly may just upset her plans. To finally build something that will last, Viv will need some new partners and a different kind of resolve.
A hot cup of fantasy slice-of-life with a dollop of romantic froth.

An orc, a succubus, and Ratatouille (the rat who wanted to be a chef from the Pixar film but in this case a baker named Thimble) open a coffee shop in Thune, a rather typical medieval-style fantasy town that has never seen, heard, smelled or especially drunk coffee before. Then Thimble the rattkin starts baking and honestly, they’ve opened the world’s first Cinnabon – complete with heavenly aromas pumped out to ensnare the masses who are about to learn just what they’ve been missing all their lives.

As much as that opening sounds like the start of a very bad joke, it isn’t at all. Instead, the story is every bit as sweet as one of Thimble’s soon-to-be-famous cinnamon rolls, and sticks in the pleasant corners of the reader’s mind just as much as Thimble’s icing sticks to everyone’s fingers.

This is one of those fantasy stories where the hero (or possibly the anti-hero) of entirely too many battlefields decides to retire while they’re still above ground and have all of their limbs and haven’t had their bell rung too many times.

And it’s a story about what happens after when anyone decides to live their dreams.

Viv visited a coffee shop once, and fell in love with pretty much everything about it. The aroma, the taste, the peace that filled her from both the drink and the ambiance of the place she drank it. She wanted to recreate all of those tastes and smells and feelings somewhere that hadn’t been introduced to coffee – at least not yet.

When she found a legendary treasure that was supposed to guarantee good fortune, she took it and her savings, retired from the mercenary life, and opened the first coffee shop in busy, bustling, Thune.

Along the way she gathered a group of friends and comrades to help her spread the word and run the business, while taking on trouble from both the local “protection racket” and from an old frenemy who believed that Viv hadn’t been honest about that treasure.

As much as Viv is determined to start a new life that doesn’t involve slicing throats or any other body parts, there are plenty of times when she’s tempted to solve her problems the way she used to. Especially when she loses the lucky charm that made all of her success possible.

Only to learn that it wasn’t the charm at all. It was all Viv, and the smell of coffee and cinnamon rolls, and the love and respect of her friends, her neighbors, and her new-found family.

Escape Rating A+: Legends & Lattes is one of those stories that no one knew they needed until they read it. Only to realize that the whole story is pretty much the best thing ever. I pulled this one off the virtually towering TBR pile because I seriously needed a comfort read after last week and I wanted something new at the same time. I also wasn’t in the mood for anyone who didn’t deserve it to die, or for anyone to get abused. I just wanted all good things in an interesting story and that’s actually kind of hard. Fictionally, all good things and interesting are contradictory, there’s no story without at least some drama.

Somehow, Legends & Lattes just delivered on all counts. (The only thing that would have made it better would be if one of Thimble’s cinnamon rolls had popped out of the book while reading!) Viv has a dream and she doesn’t step on anyone to fulfill it. She gathers great people around her, she accepts them as they are, treats them well, and they grow together into a lovely found family.

The course doesn’t always run smooth. There’s a lot of hard work involved in starting a business – especially one that no one is looking for or understands. Her carpenter calls the coffee “bean water” and he’s not wrong.

There are a few books with orcs as protagonists, but usually they’re doing the things that we expect of orcs in fantasy even if the orcs are the good guys. Viv is turning over a new leaf, trying not to be what everyone expects an orc to be. It’s hard but it’s working – mostly.

Her assistant-turned-business partner (and eventual romantic interest) Tandri, is a succubus, another character we don’t see being on the side of the angels. But she’s yet another character in this story who is cast against type and it works.

And honestly, Thimble the rattkin baker is the best character in the whole story. I love Thimble – and I love that the little guy is a genius and that this shy and self-effacing character gets his own chance to shine.

But what makes the story so wonderful is that the treasure wasn’t really treasure. It was a stone full of karma and because Viv put good into it she got good out of it. The next person to own it seems to be on the road to getting exactly what he puts into it as well.

And that’s a story I wouldn’t mind reading – along with anything else this author comes up with. Now that Legends & Lattes has been picked up by Tor Books, maybe we’ll see more stories set in Thune! Pretty please! With cinnamon on it?