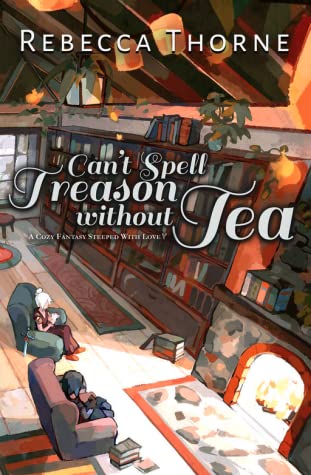 All Reyna and Kianthe want is to open a bookshop that serves tea. Worn wooden floors, plants on every table, firelight drifting between the rafters… all complemented by love and good company. Thing is, Reyna works as one of the Queen’s private guards, and Kianthe is the most powerful mage in existence. Leaving their lives isn’t so easy.
But after an assassin takes Reyna hostage, she decides she’s thoroughly done risking her life for a self-centered queen. Meanwhile, Kianthe has been waiting for a chance to flee responsibility–all the better that her girlfriend is on board. Together, they settle in Tawney, a town that boasts more dragons than people, and open the shop of their dreams.
What follows is a cozy tale of mishaps, mysteries, and a murderous queen throwing the realm’s biggest temper tantrum. In a story brimming with hurt/comfort and quiet fireside conversations, these two women will discover just what they mean to each other… and the world.

I picked this up because once I knew it existed, I couldn’t resist buying it and reading it instantly. Why? Because everything about this book practically screams that it’s following in the cozy fantasy footsteps of Travis Baldree’s completely marvelous Legends & Lattes – and I adored that book. It is absolutely the perfect comfort read for our very uncomfortable times.

But at the moment there’s no sequel on the horizon – and I very much wanted more of the same. At least more in the same vein. Which is when Can’t Spell Treason Without Tea poured its way into my reading consciousness.

When we first meet Reyna and Kianthe, they’ve been together for two years. Except not together being together. They both have important jobs with big responsibilities, so running away together to open their combined dream tea shop and bookstore is never more than just that – a dream.

But, as the saying goes, a good job won’t love you back. That’s particularly true in Reyna’s case. She’s one of Queen Tilaine’s elite guards – which sounds like a really awesome and important job. The problem is that Queen Tilaine is a tyrant to her people, a bully to her staff, and a sadistic psychopath to pretty much everyone pretty much all of the time. A psychopath with the power to indulge all of the worst traits of her psychopathy – so she does.

That someone comes to court to assassinate her isn’t exactly a surprise as it happens on the regular. That Reyna stops the would-be assassin is also par for this court’s course. That Reyna gets wounded in the process of stopping said assassin is all in a day’s work. That the Queen she has served all her life tells the assassin and the entire court just how little Reyna’s life is worth to her is also, unfortunately, all too “normal”.

But it’s the straw that breaks Reyna’s willingness to sacrifice herself for a Queen who will not only never appreciate her service, but will, in fact, actually send her into harm’s way even at times when it’s not necessary just because she can. Because she needs to remind everyone of her power over their lives at every single turn.

So Reyna runs away. From the Queen, from the Palace, from her duties as a guard. That’s treason in the Queendom, and Reyna knows it. She just hopes she can outrun it – at least for a little while.

Which is where Kianthe comes in. Kianthe, the most powerful mage in the entire world, loves Reyna every bit as much as Reyna loves her. While Kianthe has duties to that world that she can’t completely leave behind, she CAN leave behind all the bureaucracy that goes with it. They can live their dream, that dream of a bookshop for Kianthe that brews and sells specialty teas crafted by Reyna.

So they do. They run away to the tiny border town of Tawney, ‘appropriate’ a dilapidated house from a gang of dead bandits, and open their store. They expect trouble to find them eventually, and they’re ready for it.

The dragon invasion that comes first they weren’t expecting at all. 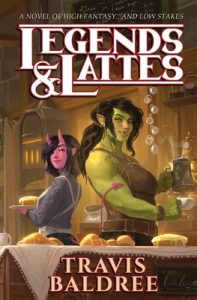 Escape Rating B+: The author calls out her debt to Legends & Lattes in her ‘Acknowledgements’ at the end of the book, so it seems right in line to compare the book in hand to the work that directly inspired it.

While there’s a romance at the heart of both stories, the romances themselves are very different. Reyna and Kianthe are an established couple when the story begins, so instead of seeing their tentative steps toward romance, what we have here is more of a hurt/comfort story – as one or the other of them is either wounded or emotionally wrecked at many points in the book. The relationship that they are navigating, sometimes well and sometimes very badly – as people do – is the metamorphosis from a long-distance relationship to a live-in one that also includes owning a business together. So those story beats are different but lovely in their own way.

The biggest difference between Treason and Legends is that Treason mixes a LOT more epic fantasy elements with its cozy story of opening a business in a small magical town. The ‘marriage’ between the coziness and the epic doesn’t always go as smoothly as the relationship between Reyna and Kianthe does.

At the same time, the overall arc of the series looks like it’s going to be powered by those dragons. They are both a huge – literally – menace to the town and the source of an equally deep mystery that Kianthe and Reyna will have to solve over subsequent books in the series.

The one – very large – fly in the otherwise honey sweetness of this book is Queen Tilaine herself. On the one hand, the border straddling nature of Tawney adds a lot to the setting of the story. It’s disputed territory between the Queendom and its neighbor Shepara. But it’s also far enough from both capitals that the inhabitants have made their own brand of peace with their neighbors, leaving the antipathy between the rulers AND the religions of the home countries far behind and well out of everyday life. Which is all absolutely fascinating and it should be fun to watch how that works out as the series continues.

But very much on the other hand, Queen Tilaine herself is a gigantic problem. She’s the real villain of this piece, and she suffers from serious villain fail. She’s so far over so many tops that she’s just BWAHAHA evil with no redeeming characteristics and nothing to let the reader see that she’s the hero of her own story – as villains generally see themselves. It’s not just that she’s evil, but the way that she’s evil means that her country is barely functioning and she has enemies on all sides looking to overthrow her. In other words, there are huge reasons why assassination attempts happen on the regular, and they’re all at least somewhat righteous.

Tilaine is a bigger looming threat over Reyna and Kianthe than the dragons – and that’s saying something. The dragons are actually more sympathetic and they make more sense!

As much as I enjoyed the story, Tilaine’s particular brand of BWAHAHA and the way it was dealt with didn’t work for me nearly as well as the dragons – or as well as every other part of the story. Your reading mileage may vary.

Overall, I have to say that while Treason doesn’t quite get the same amount of lightning into the bottle that Legends did, it is very much a worthy successor to it – especially as a second book in the Tomes & Tea series is already in the works. So it tided me over quite nicely for a few hours, and now I want more of both!

One thought on “Review: Can’t Spell Treason Without Tea by Rebecca Thorne”