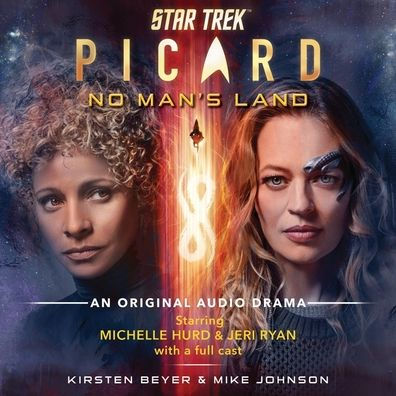 Discover what happens to Raffi and Seven of Nine following the stunning conclusion to season one of Star Trek: Picard with this audio exclusive, fully dramatized Star Trek adventure featuring the beloved stars of the hit TV series Michelle Hurd and Jeri Ryan.
Star Trek: No Man’s Land picks up right after the action-packed season one conclusion of Star Trek: Picard. While Raffi and Seven of Nine are enjoying some much-needed R&R in Raffi’s remote hideaway, their downtime is interrupted by an urgent cry for help: a distant, beleaguered planet has enlisted the Fenris Rangers to save an embattled evacuation effort. As Raffi and Seven team up to rescue a mysteriously ageless professor whose infinity-shaped talisman has placed him in the deadly sights of a vicious Romulan warlord, they take tentative steps to explore the attraction depicted in the final moments of Picard season one.
Star Trek: No Man’s Land is a rich, fully dramatized Star Trek: Picard adventure as Michelle Hurd and Jeri Ryan pick up their respective characters once more. Written for audio by Kirsten Beyer, a cocreator, writer, and producer on the hit Paramount+ series Star Trek: Picard, and Mike Johnson, a veteran contributor to the Star Trek comic books publishing program, this audio original offers consummate Star Trek storytelling brilliantly reimagined for the audio medium.
In addition to riveting performances from Hurd and Ryan exploring new layers of Raffi and Seven’s relationship, Star Trek: No Man’s Land features a full cast of actors playing all-new characters in the Star Trek: Picard universe, including Fred Tatasciore, Jack Cutmore-Scott, John Kassir, Chris Andrew Ciulla, Lisa Flanagan, Gibson Frazier, Lameece Issaq, Natalie Naudus, Xe Sands, and Emily Woo Zeller, and is presented in a soundscape crackling with exclusive Star Trek sound effects. Drawing listeners into a dramatic, immersive narrative experience that is at once both instantly familiar and spectacularly new, Star Trek: No Man’s Land goes boldly where no audio has gone before as fans new and old clamor to discover what happens next.

I picked this up in one of those “Audible Daily Deal” things for $1.99. And it was certainly worth way more than I paid for it. Because this was not quite two hours of Star Trek fun in a week where I seriously needed to go to my happy place – and Star Trek is still very much that place.

Like so many Star Trek: Next Gen episodes – and this certainly does seem a lot like an episode of Picard so that fits – No Man’s Land has an ‘A’ plot and a ‘B’ plot. The A storyline is an action adventure story, with Seven of Nine and the Fenris Rangers racing off to save a hidden Romulan cultural archive from the depredations of one of the mad warlords who rose up after the fall of the Empire.

The B plot, as it so often was in Next Gen, is a character-driven story wrapped around the possible romance that was hinted at between Raffi and Seven of Nine in the closing moments of the final episode of Picard’s first season. The possibility of that relationship is echoed in the A plot by the bitter sweetness of the lifelong love between Seven’s old friend, Professor Gillin and Hellena, the wife he was separated from during the Romulan evacuations so many years ago.

Like so many Trek episodes from ALL of the series, it all begins with an emergency distress call from a far-flung outpost. In this particular case, a far-flung outpost filled with nothing but scholars, historians, scientists and relics – some of which are also among the first three groups. It’s a repository of Romulan culture, desperately saved from the destruction of the Romulan homeworld by the Fenris Rangers, with the cooperation – sometimes – of the original owners and the assistance of the librarians and archivists who gathered the material. It has been protected mostly by its obscurity, but that cloak has been torn away and one of the more implacable Romulan warlords is on his way to either capture or destroy it.

Except, that’s not exactly what happens.

But the distress call interrupted a tender moment between Raffi and Seven, as duty calls one of them, in this case Seven, and drags a bored, unemployed Raffi along in her wake. And that’s where the real fun begins – as it so often does in Trek – with a mission, a barely workable plan, and a character going it on their own without any plan but possibly a death wish.

And underneath it all, an adventure that might blow up in everyone’s faces leading to an ending that no one quite expects.

In other words, a typical day on the bridge of a Federation starship – even if someone has to steal one first!

Escape Rating B: I went into this hoping for a bit of fun, and I certainly got that so I left this story pretty happy with the whole thing. But it listens very much like a cross between an episode of the Star Trek universe as a whole and one of the media tie-in novels that Star Trek birthed in vast quantities.

By that I mean that I was expecting fun but not anything that would seriously affect the main storyline of the show – in this case – Picard. So I was expecting the hints of a romance between Seven and Raffi to be bittersweet at best because even if it does happen eventually it can’t happen here.

On the other hand, the exploration of the Fenris Rangers and how they work together and mostly don’t was fascinating. The banter between Starfleet-trained Raffi, over-the-top, walking malaprop Hyro and jack-of-all-trades Deet was frequently hilarious. That trio act provided most of the comic relief in a story that was otherwise pretty damn serious.

Of course I loved the whole idea of the hidden repository. That’s always cool.

But it was the story of Professor Gillin and his lost love that tugged at my heartstrings, and I really liked the way it held up a mirror to the relationship that Raffi and Seven are tentatively reaching towards – and backing off from at the same time.

Because Seven and Raffi just aren’t in the same place. They’re both damaged and grieving and more than a bit lost – but Raffi is at a place where she’s willing to try again and Seven just isn’t there and may never be. Watching them recognize that was sad but also heartfelt.

And it rang so very, very true that Raffi’s love for the Federation was the relationship that she felt the most regret over, that it was the most difficult love of her life for her to completely give it up. Because in a way that’s true for all of us who have been fans over the years and never quite let that love go.

So if Trek is your happy place, or if you just want to dip a bit into that world, or if you’re looking for a bit of distraction from whatever that won’t hurt too much or pull too hard or tax too dearly on your world-weariness of the moment, No Man’s Land is actually a great place to go for a couple of hours.