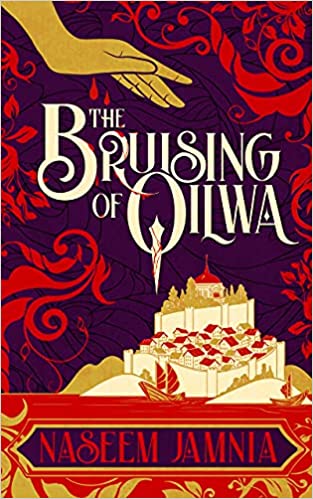 In this intricate debut fantasy introducing a queernormative Persian-inspired world, a nonbinary refugee practitioner of blood magic discovers a strange disease that causes political rifts in their new homeland. Persian-American author Naseem Jamnia has crafted a gripping narrative with a moving, nuanced exploration of immigration, gender, healing, and family.
Firuz-e Jafari is fortunate enough to have immigrated to the Free Democratic City-State of Qilwa, fleeing the slaughter of other traditional Sassanian blood magic practitioners in their homeland. Despite the status of refugees in their new home, Firuz has a good job at a free healing clinic in Qilwa, working with Kofi, a kindly new employer, and mentoring Afsoneh, a troubled orphan refugee with powerful magic.
But Firuz and Kofi have discovered a terrible new disease which leaves mysterious bruises on its victims. The illness is spreading quickly through Qilwa, and there are dangerous accusations of ineptly performed blood magic. In order to survive, Firuz must break a deadly cycle of prejudice, untangle sociopolitical constraints, and find a fresh start for their both their blood and found family.
Powerful and fascinating, The Bruising of Qilwa is the newest arrival in the era of fantasy classics such as the Broken Earth Trilogy, The Four Profound Weaves, and Who Fears Death.

On its quietly beguiling surface, The Bruising of Qilwa combines medical mystery with a Persian-inspired fantasy world to tell a story that seduces its reader into exploring the hidden depths of its world. As it tells the story of Firuz-e Jafari and their refugee family, it also manages to say quite a bit about immigration, refugees, and colonialism from the perspective of both the colonizers and the colonized.

But it all starts with Firuz doing their level best to support their family and practice their calling. Firuz is a healer, but there are so many hedges around that word that they almost can’t manage to separate the things they are allowed to say about themselves from the things they must keep hidden at all costs.

Firuz is a refugee in Qilwa. A despised refugee from a country that once upon a time ruled over Qilwa with a heavy, imperial hand. Those days are long gone, but the current refugee crisis has awakened all of the Qilwans old fears of being overwhelmed by masses of ‘others’.

That refugee crisis is exacerbated by a health crisis. Not just the old canard about refugees bringing disease, but an actual disease that is sweeping the overcrowded conditions in the slums that are the only housing the refugees are permitted to occupy. That the disease is making its way into the ‘better’ parts of the city has everyone on edge.

Firuz presents themselves to the only healer even bothering to treat the refugees, offering their services as an apprentice and assistant. Because Healer Kofi needs help every bit as much as Firuz needs both to help the Healer and to have a job to support their mother and brother.

Firuz and Kofi form what at first seems like an unlikely but quite fulfilling partnership. After all, Firuz is a refugee, their people are hated, feared and despised in Qilwa, and they are a secret practitioner of the forbidden science of blood magic.

Kofi is a native Qilwan, well-respected if not always liked, fully trained as an elemental healer and willing to go anywhere, do anything and work with anyone in order to fulfill his healing oaths. Including breaking them.

Escape Rating A+: This was a reread for me. I read this back in May for what turned out to be a STARRED Library Journal review. Because the book is awesome, and turned out to be even more so on the second go around.

The plot that powers the whole thing is the medical mystery. The first plague was just a disease of poverty and poor living conditions, malnutrition and hopelessness. But it spawns a second plague, and that’s the one that seems to drive Healer Kofi, Firuz, and Firuz’ friend Mortician Malika to desperation. Corpses of refugees are turning up that aren’t completely dead. Not that they are zombies, but that the person is dead while the body is still busily producing blood and other fluids. It’s weird, it’s wrong, and it’s a mystery that Malika and Firuz feel compelled to solve.

But the vehicle through which that story is told is the story of Firuz and their life in Qilwa – and the life of the city of Qilwa that surrounds them. Firuz’ story manages to say a whole lot of things without talking about them directly and certainly without lecturing about them. The reader is absorbed in their story rather than have it thrust at them, and it’s lovely and immersive.

As Firuz reveals themselves, we learn that they are ace, aromantic and trans. But those are things that just are in their world, as innate and unremarkable as what color eyes one has. They live in a world where those are all just a part of life and no one remarks on them.

And yet those factors still cause conflict, a conflict which intersects with their magic, which leads to all the other things the story makes the reader aware of, in a way that both points out the normalcy of Firuz’ person as they are and highlights the factors that make them different from their current neighbors. Their refugee status, their language and country of origin, the forbidden magic they practice and can’t hide well.

So, as Firuz looks into the medical mystery, the reader looks into Firuz’ perspective on their world, and we get a glimpse of just how the past of Qilwa’s colonization by Firuz’ people and the way that Firuz’ people interpret the world because they were once colonizers but no longer are has shaped current relations between the two countries and the refugee crisis that is straining that relationship to its limits.

Firuz, as they live their life in Qilwa, finds themselves at the crux of all those underlying issues of immigration, colonialism, and fear of change and fear of the unknown. But the medical mystery comes back to a bigger and more immediate question – that old one about whether the ends justify the means. Can evil ever be justified by the good that might result from its use? Who gets to decide? And who will be left to pick up the inevitable pieces?

The Bruising of Qilwa is one of those stories that makes the reader think, and feel, and think again, long after the last page is turned. As witnessed by my picking this back up months later to see if it was as good as my memory made it – only to discover that it was even better than I first thought.

One thought on “Review: The Bruising of Qilwa by Naseem Jamnia”