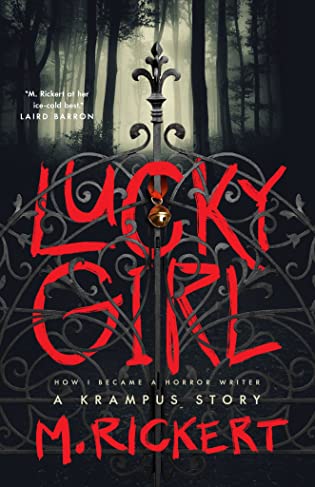 Lucky Girl, How I Became A Horror Writer is a story told across Christmases, rooted in loneliness, horror, and the ever-lurking presence of Krampus written by World Fantasy and Shirley Jackson Award-winning author M. Rickert.
“Smooth and ruthless, Lucky Girl is M. Rickert at her ice-cold best.”—Laird Barron
Ro, a struggling writer, knows all too well the pain and solitude that holiday festivities can awaken. When she meets four people at the local diner—all of them strangers and as lonely as Ro is—she invites them to an impromptu Christmas dinner. And when that party seems in danger of an early end, she suggests they each tell a ghost story. One that’s seasonally appropriate.
But Ro will come to learn that the horrors hidden in a Christmas tale—or one’s past—can never be tamed once unleashed.

Once upon a time there was a girl who survived the deaths of her entire family – because she was waiting to meet a boy in a deserted park on Christmas. People called her a “lucky girl” for her survival, but if this was luck it was certainly of the perverse variety. The kind of luck that generally described as “if it wasn’t for bad luck she wouldn’t have any at all.”

Once upon a time there was a college student who met four other lonely students at a diner on Christmas and invited them back to her low-budget student apartment so they could all be lonely together. They ended the evening by telling each other creepy stories that fit the season. She took one of those ghost stories and turned it into her first novel, launching her career as a horror writer.

Considering how difficult it is to make a living as an author, receiving the seed of that story that she turned into a career could certainly be considered “lucky” for some of the better definitions of luck. At least at the time.

But the girl who survived and the student who became the horror writer of the subtitle of this book are the same person. And just as young Ro the survivor is the same person as Goth writer Ro, so too the horror of her family’s murder, and the horror of that story she turned into her first novel turned out to be continuations of all the horrors she had already experienced.

Neither of which was going to EVER be over.

Escape Rating C: Horror is not usually my cuppa. Come to think of it, Christmas isn’t either. So these are not exactly two great tastes that go great together. The combination is a bit more like black licorice and anchovies. There are people who like both, but they are also most definitely, acquired tastes that not everyone manages to acquire. And I can’t imagine combining the two in the same dish, although I’m sure there’s someone out there who has or will try it. Hopefully far away from me.

There are two stories in Lucky Girl that also feel like they don’t quite go together. The first story is the murder of Ro’s entire family after she sneaks out of the house on Christmas to meet a boy who has been leaving her anonymous cards. She doesn’t know who he is, she doesn’t know what he looks like, but she’s a teenager and the whole thing sounds more romantic than it does dangerous.

But it’s not nearly so romantic when he doesn’t show. When she returns to her family home, her family is dead and the house has been consumed in the fire that killed them. Ro doesn’t know whether it was all a horrible coincidence, whether she’s lucky to be alive, and/or whether her mystery suitor planned on kidnapping her for sex trafficking.

Whatever the cause or the intended result, it’s a non-fiction horror that leads her to pursue a career in fictional horror.

The ghost stories that Ro and her impromptu lonely hearts club share that Christmas night at college is supposed to be some of that fake horror. Ghost stories. Just stories. But one has that haunting quality that makes it seem like it might be more.

Still, the two stories, the real-life familicide and the holiday Krampus story, don’t seem like they are part of the same thing. One is all-too-real, while the other can’t possibly be. At least not until they both turn out to be, not just real, but worse than even Ro’s gothic imaginings ever dreamed of.

Ro’s own story, as horrific as it was, creeped me out but didn’t send my willing suspension of disbelief off gibbering into the night. The horror of that story was in its plausibility. The holiday ghost story, the Krampus story, would have been mythic-type horror if told on its own, but the two looped together just didn’t gel into one horrific whole, at least not for this reader. And the combination of the two did give my willing suspension of disbelief a very bad case of the gibbers.

Your reading mileage – quite possibly while in full flight from the gruesomeness – absolutely may vary.