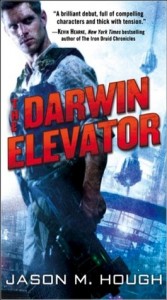 In the mid-23rd century, Darwin, Australia, stands as the last human city on Earth. The world has succumbed to an alien plague, with most of the population transformed into mindless, savage creatures. The planet’s refugees flock to Darwin, where a space elevator—created by the architects of this apocalypse, the Builders—emits a plague-suppressing aura.

Skyler Luiken has a rare immunity to the plague. Backed by an international crew of fellow “immunes,” he leads missions into the dangerous wasteland beyond the aura’s edge to find the resources Darwin needs to stave off collapse. But when the Elevator starts to malfunction, Skyler is tapped—along with the brilliant scientist, Dr. Tania Sharma—to solve the mystery of the failing alien technology and save the ragged remnants of humanity.

It’s impossible not to think of the pun “Darwin’s Elevator” in relationship to this story. The elevator left by the alien “Builders” may have been placed in Darwin, Australia, but it is definitely the strong that survive.

Among the questions that remain at the end of this post-apocalyptic science fiction adventure story are who the hell are the damn Builders and why Earth? What is the purpose of their little “fly-by” munificence, and then disaster? Are they experimenting on us? Is there a reason for the devastation or is it all just a terrible accident?

The story takes place in the mid-23rd century, so a future we can envision, but not so distant as to seem totally unreal. And the reader will certainly hope this one isn’t the one we get. First an alien race “gifts” the Earth with a marvelous present, a space elevator that allows the building of orbital platforms and space farms. Sounds like a dream!

A boomtown is created at the base of the elevator, in Darwin. Scientists frantically study the remains of the alien spaceship and the elevator, trying to figure out how to capitalize on the new technology.

Twelve years later, disaster strikes. A plague blankets the Earth, and humans everywhere devolve into subhumans. Except for people within the radius of Darwin and the Elevator. Everyone else becomes a “subby”. Basically, it’s a zombie plague. There are a few immunes. The human genome always does have quirks.

The story starts 5 years after the subby plague. Life in Darwin has settled, or maybe that should be succumbed, to the lousy new order. The daily, soul-sucking grind. But one man is dead certain that the Builders are on their way back, right then, and that whatever they are bringing this time, it will probably make life on Earth even worse than it already is.

Even though Neil Platz is a powerful man among the people living on the orbital stations made possible by the Elevator, he can’t just announce his suspicions to what’s left of the world. It would cause widespread panic. Instead, he starts a series of intrigues designed to get other people to figure out that disaster is very nearly upon them. Again.

The Darwin Elevator’s plot is seen through the eyes of the people that Neil Platz is manipulating, either directly or indirectly. He is working for the greater good. In a way, he’s like Moses leading his people to the Promised Land. He has the vision, but getting there himself is an entirely different question.

Platz’s best weapon is Skyler Luiken, a scavenger pilot who is fortunate or unfortunate enough to be an immune. Skyler can’t catch the subby virus so his life is spent exploring the land outside the “Aura” created by the Elevator, searching for parts and material left behind in the decaying cities. It’s a war of attrition, because the subbies band together and fight like packs of wolves.

But the tool Neil has used the longest is scientist Tania Sharma. She’s been surrogate daughter and esteemed colleague, but Platz is responsible for the death of her parents. Yet she is the only person he can trust to carry out his plans to save humanity if he falls.

Because he is also manipulating the greed and fear of those arrayed against him. The leader of the security forces on the Orbital Council and the sadistic and brutal overlord of the city of Darwin both think they can control the chaos of the new world order. They think Platz is their enemy and believe that they can manipulate the alien ships for their own profit.

That anyone would think an alien race who would poison an entire planet could be either bargained with or defeated by any weapons developed on Earth is the sort of short-sighted thinking that could bring the entire human race to an end. Unless wiser heads prevail.

Escape Rating B: In addition to the play on words between “Darwin” and “Darwin’s” Elevator that keeps running through my mind, the descriptions of both the subby virus and the way the cities were deteriorating reminded me a lot of the game The Last of Us. I don’t know what made the humans devolve in the game, but the subhuman enemies and deserted cities are all too similar.

Skyler, the action-hero of The Darwin Elevator, and Joel, the hero of The Last of Us, could probably pass for brothers. They’re both men who look older than they are and have been beaten down by very hard lives. They’re in positions where they can’t afford to care as much as they might otherwise have done.

The difference is that Skyler is in a position of authority as pilot, but has a difficult time giving orders. The more confident he is, the easier it would be for the crew to accept that he is the one in charge.

However, he doesn’t keep the crew all that long. And thereby hangs part of the tale. Skyler is just one piece of the puzzle, just one of the points of view, admittedly a major one. Tania Sharma is another major point of view, and one that it looks like will be carrying the story forward into the next book. She’s carrying the science story. Neil Platz carries the good side of the poltical story, and he also bears the weight of the historic perspective.

The bad guys also get their oar into this water. Russell Blackfield carries, well, the water for the bwahaha boys.

But these aren’t the only point-of-view characters, just the most prominent ones. Sometimes the perspective switches are a bit whiplash-y. 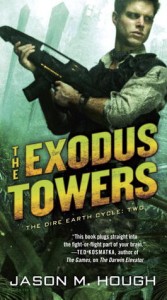 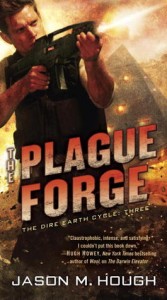 I wonder if the titles of the rest of the trilogy (The Exodus Towers and The Plague Forge) constitute any sort of hint?