Today I’d like to welcome author Kim Foster, the author of the tremendously fun new book A Beautiful Heist (review here). She’s here to talk about…

The Irresistible Appeal Of A Good Heist 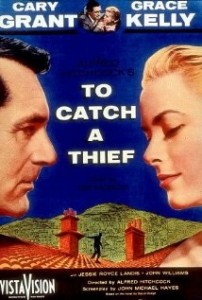 The heist story, especially on the big screen, is a well-loved genre. Capers have been a staple in Hollywood for decades—whether we’re talking about Hitchcock’s To Catch A Thief in 1955, The Great Train Robbery from way back in 1903, or more recent blockbusters (and remakes) like Ocean’s Eleven and The Italian Job.

But what accounts for the enduring appeal? Well, being a writer of heist stories, I’ve given this a lot of thought, obviously. And here’s what I’ve come up with.

Pulling off a heist is the sort of daring act that people, in their day to day lives, tend not to attempt. The danger of falling to your death, the likelihood of going to prison—these are all effective deterrents, yes? Which is why it’s so thrilling to read about, and watch, other people doing such death-defying things. 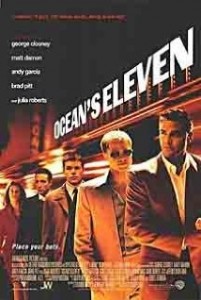 A heist is often structured such that the protagonist-criminals are up against a big bad corporate power with endless resources and money and, frequently, a nasty disposition (think Andy Garcia’s character in Ocean’s Eleven). Just like in sports movies, we love to cheer for the underdog.

The challenge of going up against all that security, all that power, not to mention the layers of law enforcement…well, it usually means our protagonists, the criminals, need to be clever. And they need to dig deep to succeed. It’s what compelling fiction is made of, really—heroes who are facing insurmountable odds. If it were easy, it wouldn’t be much of a story.

Cheering for the Team

Tackling mission impossible usually requires a team. And that’s something we like to see in our stories—teams working together. Plus, the more motley the crew, the better. A hodgepodge of people, each bringing a different skill set to the table, and all those moving parts working together, well it’s great fun to watch and very satisfying when it all comes together.

A Criminal We Can Root For

Heists and capers aren’t the only stories with less than honourable protagonists. The anti-hero is a compelling character in many genres. I think, as humans, we’re fascinated by people with layers and contradictions and secrets, and characters who are more than they appear. Of course it can go too far, and then sometimes the anti-hero is just, well, the villain. The key thing about a thief is the non-violent crime. You can get behind a crook who’s not looking to hurt people. A crook who’s attempting to take on Goliath, using his or her own unique talents. That’s a character we can root for.

So how about you? What’s your favourite heist story? 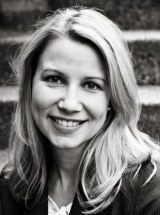 About Kim FosterKim Foster is a medical doctor who has been a lifelong lover of fiction. She’s a mom who decided that midnight feedings of her newborn were a fine time to get serious about writing. And she’s a novelist who, in spite of sound advice to “write what you know,” simply couldn’t resist crafting a story about a professional jewel thief. Online, you can find her blogging about her left-brain, right-brain mash-up on kimfosterwrites.com. A practicing physician and the health blogger for YummyMummyClub.ca, Kim makes regular TV, radio, and speaking appearances. She is a member of the Victoria Writer’s Society and the Pacific Northwest Writers Association, and lives in Victoria, British Columbia, with her husband and their two young boys. A Beautiful Heist is her first novel.

Kim is kindly giving away one ebook copy of A Beautiful Heist! To enter, please use the Rafflecopter below. 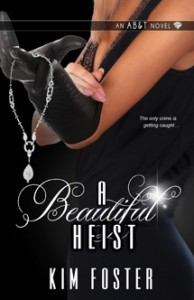 Everyone has a talent. Some are just more legal than others. Cat Montgomery steals jewels for AB&T, the premier agency for thieves in Seattle. Career perks: good pay, great disguises, constant adrenaline rush. Drawbacks: the possibility of jail time…or worse. Now she’s taken on a lucrative side job—recovering a priceless Faberge egg for an alleged Romanov descendent.

Though Cat is working solo, there are plenty of interested players. Her FBI ex-boyfriend is nosing around, as is her former mentor-turned-nemesis. Then there’s the sexy art thief helping—or is he hindering?—her mission. If her luck holds out, this could be the case that allows Cat to retire with her conscience and her life intact. If not, it’ll be her last job for all the wrong reasons…

Everyone loves a great caper story–that’s what made Ocean’s Eleven so popular–twice!

A Beautiful Heist is just that, the story of a great caper, a high stakes robbery (the penny-ante stuff isn’t any fun) but it’s more than that.

In the midst of that high-stakes robbery we have one of the classic forbidden romances: the thief and the cop, well, FBI agent, who have fallen for each other and can’t manage to fall out.

Cat Montgomery is a thief, and she’s very, very good at her job. It is a job, she even has a real employer: AB&T, the premier thieving agency in Seattle. As long as she plays by the rules, the job has a lot of perks.

The problem is that AB&T is a real employer that files real tax returns, and Cat hasn’t. So when the IRS comes calling for back taxes, Cat takes a very risky side-job for someone she can’t check out properly. She thinks she’s returning one of the lost Fabergé eggs to the Romanov family.

Instead she’s stealing one of those treasures from a Romanov descendant and giving it to, whom exactly?

Stealing it back turns out to be much, much harder than the original theft. The egg’s new owners turn out to be very, very nasty people. But Cat feels like she has to right the wrong she created. No matter what it costs.

Because Cat’s not sure who is betraying her, but someone certainly is.

Escape Rating B: A Beautiful Heist does remind me a lot of one of those great caper stories, because those movies are usually built with multiple plot misdirections that layer one on top of another, and keep you guessing until the very end.

The overarching story is the caper itself. Cat stealing the egg, and then, stealing it back. Everything else fits under that big umbrella. Maybe the better picture would be circus tent.

There’s also Cat’s redemption story. Cat is still trying to forgive herself for her sister’s death. Penny died in an auto accident because Cat wouldn’t steal something from another student’s locker. Cat still hasn’t forgiven herself.

Then there’s the love story between Cat and Jack, Cat’s once and future love-interest. They did break up, because, well, a thief and an FBI agent, that’s a recipe for disaster. But they broke up because they thought they should, not because they were really done with each other. They’re so obviously not.

And speaking of Jack, the way that Cat and Jack resolve their differences revolves around the secret of the egg, which turned out to be a humdinger. This particular bit of mythology, which I’m desperately trying not to give away, was one that I haven’t seen before. The egg, yes, the Romanovs, yes, this particular thing inside the egg, no. And very cool.