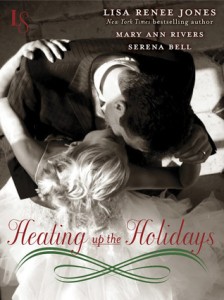 As leftover turkey and stuffing give way to stockings and little black dresses, this tantalizingly sexy eBook bundle offers up holiday-themed novellas from a trio of beloved romance authors. Lisa Renee Jones gives a dedicated reporter and a powerful businessman a chance to count their Thanksgiving blessings in Play with Me; Mary Ann Rivers presents Snowfall, the story of a woman who confronts a life-changing event—hopefully with a special man by her side—just in time for Christmas; and in Serena Bell’s After Midnight, an explosive New Year’s kiss leaves two strangers wondering whether they’ll ever see each other again.

PLAY WITH ME by Lisa Renee Jones

Kali Miller has spent three years reporting fluff stories, waiting for the article that will launch her career to new heights. When she suddenly finds herself forced to take a job as an executive secretary at a Vegas casino, Kali meets the subject of what will surely be a shocking exposé: her boss, Damion Ward, the arrogant and undeniably sexy CEO. But after Damion invites her to help him plan a Thanksgiving charity event, Kali begins to see another side of the man. And when she surrenders to the exhilarating tension simmering between them, Kali hopes her story will have a happy ending.

AFTER MIDNIGHT by Serena Bell

The clock is ticking down to midnight on New Year’s Eve, and all Nora Hart and Miles Shephard can think about is kissing each other—even though they met just minutes before. Then, as fast as Miles enters Nora’s life, he’s gone . . . and she never even gets the name of the man she thinks might just be “the one.” One year later, Nora and Miles are reunited. The chemistry between them is just as strong as they remember. But Miles broke her heart once before—and this time around, Nora’s not sure whether she can give love a second chance.

You might not have gotten enough of the holidays. Or perhaps, not enough holiday romances. There aren’t exactly a whole lot of Thanksgiving romances out there. (We looked for them over at the Shelftalk blog at MPOW (my place of work) and didn’t have much joy.

But the Heating Up the Holidays three story bundle by Lisa Renee Jones, Mary Ann Rivers and Serena Bell is a worthy attempt to squeeze one last bite of Thanksgiving turkey, a final swallow of Christmas eggnog, and squeeze one more verse out of Auld Lang Syne, wrapped up with a bow.

When I peaked inside the wrapper and saw the story by Mary Ann Rivers (if you haven’t read The Story Guy, you absolutely must, it is beyond awesome) I couldn’t resist one last bit of holiday cheer.

Play with Me by Lisa Renee Jones is the Thanksgiving story in this bunch, and frankly, it’s a turkey. I did finish it, but there just wasn’t anything all that special going on here. Both the hero and heroine had a lot of dramatic backstory, and it’s possible that if this had been longer, there would have been time to ramp up the sympathy and angst, but without that, what we have is pretty much a typical rich alpha hero of the corporate billionaire persuasion who always gets what he wants steamrolling his new personal assistant from a working relationship into a sexual relationship in less than a week of insta-lust winning out over common sense.

Escape Rating for Play with Me: D+
——————————
Snowfall by Mary Ann Rivers is the story that made me grab this book from NetGalley, and then buy it all over again from Amazon. And it was worth every penny.

This is a beautiful story about losing and finding yourself. About evolving and being forced to reinvent who you really are, over and over again. And of course its a love story. (Snowfall is the Christmas story in this bunch)

What makes it so awesome is that the author makes you feel for the characters. Not just the highs of the romance, but also the pain of the intense stuff they are going through. And the stuff they are going through is not the piddly misunderstandammits that fuel most romances, nor is it the melodramance of cheap romance. It’s awful and heartbreaking, but never cheap or easy.

Read Snowfall. You can come back and thank me later.

Escape Rating for Snowfall: A+
—————————–
After Midnight by Serena Bell starts on New Year’s Eve as the clock is ticking down towards midnight in Boston. Miles and Nora are attending a party in a high-rise condo overlooking Copley Square as friends-of-friends of the owner, both invited in order to get over their respective breakups of long-term relationships. The New Year is supposed to be a great time to start over. They connect across the proverbial crowded room, and its as if the confetti and the sparkling champagne buzzes over their first kiss. Then a fight breaks out, and Miles runs away before they can exchange names and numbers. They had their 15 minutes. The question the story answers is whether their magic was a one-time thing, or whether they can find each other and get it back. They have to figure out whether all the bad stuff that has happened to them before they met has hurt them to much to try again.

Escape Rating for After Midnight: B+