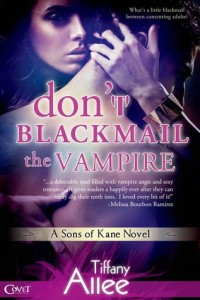 Rachel Davis will do anything to get her sister out of a bad relationship with her fiancé. Even if it involves a few fibs, a little breaking-and-entering, and blackmailing the fiancé’s potential boss, Charles, for his help. So what if the handsome Charles happens to be a vampire?

Charles Wright has found the perfect way to trap the man threatening his brother’s wife: cozy up to him, get invited along on the skiing trip, and then search for incriminating evidence. How much better that audacious but gorgeous Rachel is just as eager to nail the bastard. As far as he’s concerned, there’s nothing wrong with a little blackmail between two consenting adults. Especially when it’s time for Rachel to pay up. 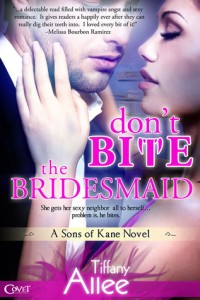 Don’t Blackmail the Vampire is the sequel to Don’t Bite the Bridesmaid (reviewed here). As the titles indicate, this series is a fairly lighthearted take on vampires and paranormal romance.

Not that there isn’t some skullduggery involved, but it’s the good old-fashioned human kind. We’re just as capable as vampires of being rotten, with or without sharp fangs.

The fun thing about this series is that the existence of vampires may be a general secret, but it’s not specifically secret–the heroines in both books know perfectly well that vamps exist, because they know someone who nearly married one.

But I said this is a sequel, because the characters in this story were all introduced in the first book, and the story directly follows the last one. Or it appears to.

In Don’t Bite the Bridesmaid, Alice asks her hunky neighbor to be her pity date at her sister’s wedding. He’s taking pity on her because her sister is marrying her ex’ brother, and said ex is a slimy arse who she caught cheating on her with her ex-best friend.

Her neighbor Noah is the vampire in this equation, and the pity date turns out to be true love after all.

But all is not well; someone is threatening Alice by phone and email, and with specific knowledge of vampires. Everyone suspects her ex, because he’s just that slimy.

And that’s where this story comes in, because someone needs to get to the bottom of the death-threats, and Noah’s brother Charles elects himself as the charmer to charm the slime. But Charles isn’t the only one who wants to nail Brant for his sliminess, so he joins forces with Rachel, the sister of Brant’s new girlfriend, who just so happens to be that ex-best friend of Alice’s that he cheated with.

Charles goes along because Rachel is the first truly “interesting” woman he’s met in decades. He’s met beautiful, but really interesting and fun to be with have been in much shorter supply. She’s refreshing as well as beautiful.

Rachel, of course, thinks he’s too gorgeous to be remotely in her league, but she needs his help.

And it turns out that he needs hers, more than he thought possible.

Escape Rating B+: This series is tremendously fun. It’s an absolute blast because the people involved are not just easy to empathize with, but also people you’d like to sit down and have a drink with, or be friends with, in real life. (At least the good ones, Brant is definitely a slime ball).

Charles is not your typical dark and brooding vampire. He was a charming people person before he was “turned” and being a vampire has not changed his basic nature. He’s in this initially because he truly wants to help his brother and desperately wants to save his almost-sister-in-law.

So naturally he gets caught up in wanting to help Rachel too.

There’s a bit of the “fake relationship” story in here as well, and it works because it’s turned on it’s head and upside down. Rachel and Charles fake a relationship and then fake him being a selfish ass so that Rachel’s sister can see the same thing happening to her. But the fake relationship turns real, and the fake breakup only proves it to both Charles and Rachel, even though they both think they don’t have a chance long-term.

As Charles reveals more and more vampire secrets, he discovers that they do belong together, and that he needs her to solve the mystery he started with. Rachel just needs to trust in her feelings, and that’s damn hard for her to do. When she finally figures it out, it’s an ending that makes you smile.

Tiffany is giving away a $25 Amazon Gift Card to one lucky commenter on the tour. To enter, just fill out the rafflecopter.