A thread in rec.arts.sf.written that was discussing the merits of ereaders vs. “dead tree” books raised some interesting corollary questions that don’t seem to have anything to do with the technology per se.  They seem more like unintended consequences.

Bookshelves have inherent browsability. Many people commented on the pleasure involved in just looking at the books they have, and seeing what is available to read, or re-read. I know that’s true for me. Also, there’s the added benefit of thinking that Galen might like something, and knowing that I have it and can simply go to the shelf and pull it out, even at 2 am. He can read it or not, because it’s already here. John Scalzi’s Old Man’s War is a book I know I introduced him to, because I had the whole series on hand. Likewise, Tanya Huff’s Valor series. Not all my introductions go that well, but when it works, it really works. There’s just something about handing someone a book that you know they will absolutely love, and then watching them just absorb it, and by absorbed by it, that is simply marvelous.

Handing over my Nook doesn’t quite have the same feel to it. It only contains my B&N stuff, not the rest of my ebooks on my iPad. And it duplicates everything–so it includes all the trashy romance novels, not just the book I want to give Galen to read.  I’m not sure who is going to be more embarrassed! 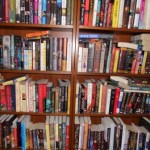 And, as someone on the list pointed out, it is much easier to lose your TBR list on an ereader than it is in the “flesh”.  A physical TBR pile has weight and heft–it piles up–sometimes literally.  My remaining “dead tree” TBR pile takes up three bookcases, plus the 200 or so books that were interfiled during the last move we made. And it continues to increase in my B&N wishlist, since that’s where I keep it.

But my ereader TBR list is even more invisible. The Locus Awards finalists were announced last week.  Connie Willis duology Blackout/All Clear was nominated Best Science Fiction Novel, and it was already moving up my TBR list after having been nominated for the Hugo last month. Guy Gavriel Kay’s latest book, Under Heaven, was nominated for Best Fantasy Novel, and it has been hiding on my Nook and then my iPad for over a year. I usually read him as soon as his stuff comes out, but the ebook was too easily buried compared to a physical object.

I’m discovering that the less obvious a TBR is, the more likely it is to wind up on a back burner. My library books get read first because they have the highest nuisance value. I do not mean that in any negative way, merely that there are so many built-in reminders. I keep them easily visible on the kitchen counter, so I don’t lose track of them. They have to be renewed, and I can only renew them so many times. If someone else wants them, I can’t renew them at all. Of course, any library books from here are going to have to be shipped back if I haven’t finished them before we move, and I’ll have to pay for shipping. Physical books that are on countertops are more in the way, and are more likely to get read next. Books in those TBR bookcases in the living room just cry out “read us first!”. The TBR bookcase in the Florida Room is “out of sight” and therefore, “out of mind”.  The TBRs that got interfiled have blended into the books I have already read.  Finding out there were over 200 of them was quite a shock.  The eTBRs are just a tiny part of my iPad. Compared to all the other books clamoring for my attention, they’re almost invisible.

So many books, so little time.

One thought on “Are eTBRs easier to forget?”