Last night, we had our first guest come to the house since we put up our books. It reminded me of an essay I read in Wired a couple of weeks ago that has generated a lot of comments on the Digital Book World group on LinkedIn.

The essay, “5 Reasons Why E-Books Aren’t There Yet,\” by John C. Abell, came to mind because of his 5th reason: you can’t use ebooks as an interior design element. He’s right. One of the first things that people used to say whenever they visited us was something about how many books we had. They were everywhere. Every room in every house had bookshelves, overstuffed bookshelves, including the master bedroom. Every flat surface overflowed. We had boxes of books we never unpacked. And since new books we wanted to read continued to be published, we bought more. But in this move, we shed 1,700 books, and we’re down to 2,300, thanks to our iPads. So the impression of tons of books simply isn’t there. There are four bookcases in the front room, and all the others are in our offices upstairs. The physical collection is shrinking. 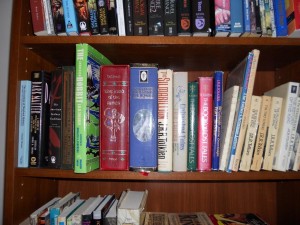 What did we lose? We lose that impression of being excruciatingly well-read. Possibly, we lose the impression of being insane. YMMV. In the decision of where to start the alphabet, we were conscious that the end of the alphabet and the miscellany that followed would be on immediate display to anyone who entered the house. Visitors see the Tolkien collection, and all our media books, so Star Trek, Babylon 5, Doctor Who, etc will be right by the door. Anyone who doesn’t know we both like Science Fiction and Fantasy will soon figure it out. 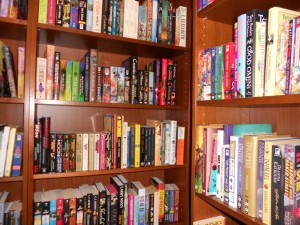 On the other hand, everything from 2010 onwards is missing. It’s on one of our iPads. Did we stop reading? Will anyone care? Or is it the mass of books that impresses? Who knows?  All that can be inferred from the iPads is that we’re both geeks. That’s fairly obvious anyway. We also have every game console known to geek-kind currently hooked up to the TV. But books, books imply an air of erudition that the iPads, consoles and computers just don’t match, no matter what’s concealed within them.

His other reasons were also interesting to think about. His number one reason was something I’ve written about before, that eTBRs don’t command your attention. There’s no pile of books in your physical space getting in your way to jump out at you and say “READ ME!” the way there can be with print books. I borrowed one print book from the local library last week. I finished that one pronto. But that may have more to do with my not owning the thing  (I have over 200 print books I own and haven’t read yet in my house) than it being print.

But Abell’s second reason is the one that I can personally get behind. He comments that a big problem to be solved in the ebook business in general is that if you read ebooks a lot, you don’t have one set of shelves, you have a set of shelves for every app, and no easy way to blend them. He’s right. and it is a right royal pain in the patootie. The joy of using an iPad is that it is supplier-agnostic. I can get ebooks from pretty much anywhere, and I do. But that means I’ve got ebooks in every app imaginable; Nook, Kindle, Google, Overdrive, Bluefire, iBooks, Stanza, etc., with no easy way to combine the lists. In the bad, old print days, my first choice TBR pile was the far end of the kitchen counter. I piled everything there. I need an ebook everything TBR app. Except that it isn’t in the ebooksellers’ best interests to allow me to combine my lists, so that app doesn’t exist yet. I’ll confess that I’ve started using the Overdrive Media Console iPad app as my ereader for any EPUB that isn’t tied to a particular company. It’s a surprisingly good general purpose ereader, and it eliminates my need for a couple of those apps. If only it read PDFs…

Ebooks are here to stay. There are still some issues to be resolved, but there’s no longer a question of whether enough people will adopt ebooks to make them profitable for publishers.

On the other hand, books are here to stay, too. Very few technological revolutions completely wipe out the predecessor. We still have radio, it’s just changed. We still have LPs, they’re just a niche market. We may not ride horses for everyday transportation, but horses are still ridden. Books, both to be read and as treasured objects, will always have a place. I recently watched Star Trek: The Wrath of Khan, again. Early in the movie, Spock gives Kirk a copy of Dickens’ A Tale of Two Cities as a birthday present. Ebooks make good reading, but there’s no way to attach ceremonial weight to them.  For that, you still need a book. 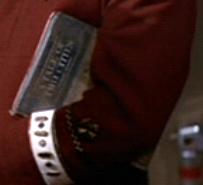 In My Mailbox #2
Life after Harry