I wasn’t quite sure whether to laugh or cry. Fox News has discovered that romance readers are the true power behind the rise in ebook sales. Romance books are among the hottest-selling titles for the Kindle, outside of the standard New York Times bestseller list titles.

The article is a classic case of “good news, bad news”. First, it panders to absolutely every single stereotype of romance readers that has ever been written, including leading off the article with a picture parade of some of the worst paperback romance covers ever spawned. Howsomever, if you look carefully, you’ll realize they are mostly parodies of what people think of as the typical romance book cover. One title reads “Okay You’re Taller Than Me…Happy Now?” I feel a little better, someone at Fox News has a sense of humor.

Second, it describes female romance readers as “Miss Lonelyhearts” while segregating technology-using, porn-surfing males into the group of four-eyed nerds. “Men are iPads, women are Nooks.” And I just caught the possible double entendre in the quote, and I wonder if Fox News intended it. Ouch.

But seriously, romance readers embraced ebooks a long time ago. I remember reading ebooks on my Palm PDA. It was small and clunky and gave me a headache, but the books were dirt cheap and I could carry a lot on a device I was already toting around anyway.

The Fox News article also totally missed the point that there are a lot of us “four-eyed nerds” who happen to also be female.  There may be differences between the sexes, but when someone starts throwing around statistics like 56% of tablet owners are male, and 55% of ereader owners are female and uses those to get to the equivalent of the old “Men are from Mars, Women are from Venus” argument, it stretches the analogy pretty far out of joint.

Nevertheless, once you get past Fox News’ arch tone, there is some meat in the article.   Magazines like US Weekly, Shape and Women’s Health, not to mention Cosmo and O, are enjoying a renaissance on the Color Nook AND iPad.  At my LPOW, romance ebook circulation outstripped any other genre in ebook circulation. Romance ebooks circulate more than twice as much as mysteries or non-fiction, which held the number 2 and 3 slots. They are quick reads, and a person can read a lot of them. There certainly is the factor of not having to display the covers of what you’re reading for the whole world to see, and I imagine that’s true for all sorts of things, including medical information, divorce books, bankruptcy planning, the list goes on. 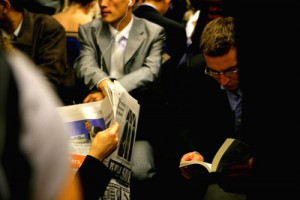 An interesting side effect of the ebook revolution is that the ebookseller knows everything about what we buy, but the person next to us in the airport or on the train knows nothing. It used to be the other way around. Is this more privacy, or less?