My featured guest for today is Jeffe Kennedy, the author of the marvelous fantasy romance series, Covenant of Thorns. The series concludes with today’s featured review book, Rogue’s Paradise, which answers so many of the questions that series fans have been waiting for.

In her guest post, Jeffe talks about one of the subjects near and dear to my heart, getting ebooks into libraries. 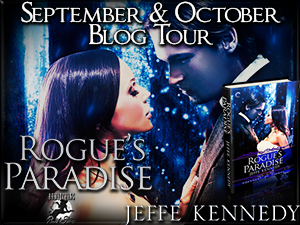 I love that Reading Reality focuses on ebooks and ebook integration into libraries. This is partly because libraries and librarians have always been such a huge part of my life as a reader. As a writer, too, which is less visible to me. But more and more, librarians come up to me at events and tell me how my ebooks are in their collections and I should know how often they’re checked out and how their patrons just love, love, love them! I’m glad they tell me, because otherwise I have no way of knowing that.

I also appreciate that Marlene is dedicated to bringing ebooks into libraries, especially genre books, because I strongly feel that, without Carina and their willingness to take a chance on my digital series, A Covenant of Thorns, then these books might never have seen the light of day. That’s the terrific thing about ebook publishers—they’ve allowed books that don’t neatly fit into genre categories to have a chance. 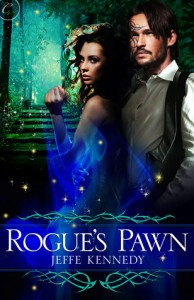 When I started Rogue’s Pawn,, I had no idea that I was writing a story that would “fall into the cracks between genres.” My tale of a modern woman, a professor of neuroscience who passes through a magical gate at Devils Tower and ends up in Faerie—exactly as in the tales of old—would maybe be an urban fantasy. Only with more romance. And sexier.

Okay, like many newbie writers, I had no idea what I was doing. I understood my story, but not how the marketplace worked.

Since I first started shopping that book—to praise for the writing and imagination, followed by rejection for marketability—the market has changed. Carina called it Fantasy Romance and now there’s lots more of those books out there. The Covenant of Thorns trilogy doesn’t sit squarely in Fantasy Romance, but it gets to be in the club still. More, the books have found readers and I’ve gotten to write others.

All because people embraced ebooks and the windows they open.

I couldn’t be more thrilled!

Because I enjoyed the Covenant of Thorns series so much, I want to give some lucky reader the chance to enjoy it too. So, the prize is the winner’s choice of Rogue’s Pawn, Rogue’s Possession or Rogue’s Paradise. These are all ebook only, so anyone can win!