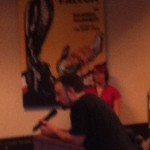 I can still hear Jim Butcher’s sing-song, “I’m not gonna tell you” ringing in my ears from his Q & A session at the Barnes & Noble in Buckhead. He chanted that refrain every time someone in the crowd tried to trip him up with a spoiler about Harry Dresden’s future adventures.

The fans only got him once. There was a minor reveal about a fallen angel hiding the shadows, whispering in Harry’s ear in Ghost Story, Harry’s latest outing. It isn’t totally obvious in the book that we’ve seen this character before, or that we might see her again in one of Harry’s later adventures, and Butcher told us her name. But that was the only time he slipped, in spite of an hour of pretty intense fan interrogation.

I bought a dead-tree book. It’s not as if I wasn’t going to read Ghost Story anyway…but the one thing that physical books have all over ebooks is the ability to get the author to sign them.  I read the first 160 pages while I waited for my turn. And then I read the ending to see if I had guessed right. My bad. And that’s what the inscription on the book reads. “To Marlene, a bad girl who already read the ending.”

I finished the book this morning. I couldn’t quite manage to stay up last night, but after all, I’d gotten kind of a late start.

Ghost Story is awesome. It also marks a departure in the Dresden Files universe. When I first started reading the series, somewhere around Dead Beat, Harry’s Chicago and Harry’s world was pretty recognizably the Chicago I knew. Since I had lived in Chicago for a lot of years, it was pretty cool that Harry’s Chicago was only about a half step away.

After Changes, when Harry dies, his world diverges pretty dramatically from the world we know. In a lot of urban fantasies, the mundanes (or muggles) are able to ignore the magic in the world.   But with Harry out of the picture, that seems less and less possible.  There’s just too much bad stuff going down.

It’s not just that Harry is dead. It’s that his death has sent the world spiraling downhill fast. For all his many faults, Harry was the biggest thing (sometimes literally) standing between the light and the darkness. And being large, he cast a huge shadow. A lot of bad things avoided Chicago because that was Harry’s turf. And a lot of bad things just plain hid in their holes because they didn’t want to attract Harry’s attention. But with Harry out of the picture…stuff happens. And big men leave big shoes to fill. Harry’s friends, and even his enemies, try to fill them, but it just isn’t quite enough.

Ghost Story story is not a happy book. In Changes, Harry decides he’s going to save his daughter, even if it kills him. It does. As a ghost, he has to clean up the mess he left behind. And if there is one thing Harry always, always does, it is make one hell of a mess. But this time, the battle is for his soul, and the lives of his friends. And his city. Because even as a ghost, Chicago is still Harry’s town. Last time out, he had to save his daughter, and he did. This time, he has to save everyone.