What parts of the human record will be preserved from the last 50, and the next 50 years? What books did we read? How did we live? What will history say about us?

One of the reasons that we know so much about the Victorian era is that they wrote so damn much. They were all inveterate letter writers. Literature, not just improving literature, but also poetry, novels, essays, proliferated to an incredible degree. And newspapers, oh the newspapers and magazines that survive. Newsprint may be a horrible preservation medium, but it is just good enough. 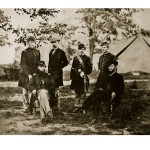 The same thing is true of the U.S. Civil War. Nothing has the immediacy of Mathew Brady’s photographs, particularly those of young soldiers.

We know a lot about the ancient Romans, too. And for the same reason. They wrote so much that a fair amount of it survived the Dark Ages. (Lots of Copies Keeps Stuff Safe is NOT a new idea!) And why do we call them “the Dark Ages” you ask? Because knowledge was destroyed instead of created.

The Internet Archive, in addition to its mission to scan books into its Open Library Project, has also begun collecting physical books as a preservation project.  Brewster Kahle goes into some detail about his reasons in an interview with the Associated Press in an article on August 1.

I confess I really like his idea. Why? Because technology can fail, or can itself become obsolete. Technology is a wonderful access method, but what happens if the technology required to read the storage media becomes unavailable? Human eyeballs still work. Most of us remember a lot of different types of computer disk storage that are no longer viable.

I love ebooks and buy fewer and fewer printed books. But as the publishing industry switches gears from print to electronic, what happens to the human record?  For example, we know a lot about the Victorians from their literature. Sherlock Holmes is as emblematic of the period as Charles Dickens. We may even know more about Holmes!

But what about us? Who will we be remembered by if everything becomes electronic? People don’t write letters, and haven’t for decades. Even business correspondence is all electronic.

In Star Trek IV, The Voyage Home, there is a scrap of dialog between Kirk and Spock on the bus, where Kirk refers to Jacqueline Susann and Harold Robbins as the “giants” of late 20th century literature.

If four or six centuries from now, contemporary literature is only remembered by the few writers that have become so overwhelming that some copies must survive in print, who would they be? And are they the ones that we would want to be remembered by?