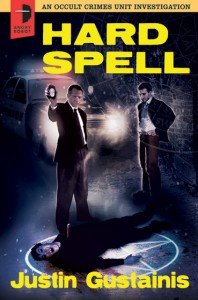 I stayed up until 1 in the morning reading Hard Spell by Justin Gustainis, published by Angry Robot. It was that kind of book. Once I started it, I just had to finish it.

Markowski is a proud member of that long blue line of cops going back to forever…he carries a badge, and a gun, and also some wooden stakes, a vial of holy water, and he loads that gun of his with silver bullets.

In this hard-boiled urban fantasy, the soldiers who returned from the battlefields of World War II didn’t just bring home war brides, they also brought home a few vampires, and werewolves, and every other creature that goes “bump” in the night. And everyone knows. “Supes” even have civil rights by the time Markowski’s story begins.

Hard Spell is a both a detective story and a really good urban fantasy. Markowski is a classic cop from that noir school–pessimistic, laconic, driven by dark secrets that are only revealed late in the story. The urban fantasy elements are a kick. McCarthy wasn’t just hunting communists, he was also hunting witches! Lucie Bird Johnson married a vampire in a nighttime ceremony, and afterwards, she was known as Luci Bat.

But like all detective stories, there’s a murder mystery involved. And like all urban fantasies, there’s magic involved. Since those two are tied together, the investigation goes to some very strange and interesting places. Added to this, since this is still a police story, the tried-and-true element of the senior cop breaking in his new, and as yet untrusted, partner is added to the mix.

This is the first book in a series, Occult Crimes Unit. I’m looking forward to the next one. Soon would be excellent.