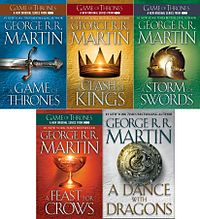 The perpetual laments of the booklover are, “so many books, so little time” and “when will my favorite author come out with their next book?”  There is also the grieving version, otherwise sobbed out as, “why didn’t my favorite author finish their series before they died?” Robert Jordan was almost the poster child for the grief version, or would be without the assist from Brandon Sanderson. And I think the entire fantasy-reading public would appreciate it if George R.R. Martin would finish up The Song of Ice and Fire before too much longer.

I read an article this week that reminded me that the “so many books, so little time” part of the equation could be even worse. The article in Salon is about Invisible Libraries. What is an “Invisible Library,” you ask? That’s easy. An Invisible Library is one that exists only within the pages of fiction, and not in the real world.  In other words, a pseudo-library.

The original Library at Alexandria would not qualify, since it did exist. They just had a few long term problems. Chiefly war. And fire. And did I mention war?

But there are two fairly large and very much pseudo libraries in fantasy that would seriously increase the TBR piles of every bibliophile now living, while simultaneously solving the problem of dead writers’ unfinished series. 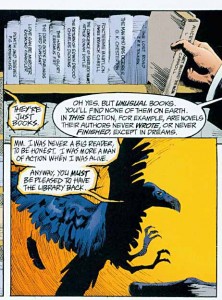 In Neil Gaiman’s Sandman series, the Lord of Dreams has a library.  The Library of Dream contains all the books that authors never wrote, or never finished, except in their dreams. What a concept! Robert Jordan’s own version of the end of the Wheel of Time. Charles Dickens probably finished the Mystery of Edwin Drood in his dreams, too.

There is also a “Invisible Library” in the Discworld, and while I would love to be able to peruse its shelves, the thought of it saddens me at the same time. Death has a library. Actually, I’m pretty sure he has two. One library is all biographies, and the ones for living people are being written in every minute. The ones for the deceased are, well, finished. The other library is a collection of all the books people meant to write, but never did. I think I might have a couple of books in there myself. That’s the one I want access to. How many Great American Novels are in there, imagined but never written? And Great British Novels, etc., etc.

And just the idea of imaginary books. Going back to Sherlock Holmes for a minute, during the Adventure of the Sussex Vampire, Holmes referred to the case of the “giant rat of Sumatra, a story for which the world is not yet prepared.” The world is probably prepared by now, but we’ll never get to read Watson’s version of the case.  Holmes and Watson tossed out the names of many cases that Watson had yet to write, and now, never will. They are all invisible books.

There are other kinds of invisible books. Some would be dangerous if they really existed. Every horror fan knows about the Necronomicon. And no one in their right mind wants it. H.P. Lovecraft created this fictional “terrible and forbidden book” as part of his stories about the Nameless and the Cthulu Mythos. Other writers also used the name Necronomicon, creating weight behind his fictional creation.

My favorite invisible book is still The Hitchhiker’s Guide to the Galaxy. Not the one by Douglas Adams, which was wonderful. I mean the one that Ford Prefect was the roving researcher for. The one published by one of the great publishing corporations of Ursa Minor. And I wonder if it would fit on an iPad.