Bottom line, it would be a better day if the Serenity were still flying. And while I’m wishing, I want Wash to still be her pilot, and the Shepherd to still be in the back, keeping his secrets and reading his book. Not to mention keeping that hair of his under control. If you watched the show, you know exactly what I mean.

In the meantime, we all keep the dream alive as best we can.

The graphic short story collection from Dark Horse Books, Better Days and other stories (Serenity, volume 2), is part of keeping that dream alive. This new, hardcover edition includes the story Better Days, which was originally published in 2008, plus three newer stories, The Other Half, Downtime, and the bittersweet Float Out.

All the stories except Float Out take place before the events of the movie Serenity, which is nostalgic but slightly confusing at this point. It’s great to see Wash and the Shepherd again, but I know they’re gone. 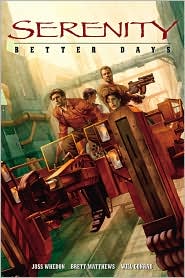 Better Days is one of the two best stories in the book. It’s about a job that both goes very, very well, and very, very badly. Which, come to think about it, seems pretty typical for our heroes. At the outset, they open a cache that contains way more money than they expected, and the crew of the Serenity is temporarily rich beyond their wildest dreams. Part of the story is telling each other what those dreams are, or living them while spending some of that lovely money.

The other part of the story is the bad luck part. They stole a weapon, and the Alliance wants it back. And Mal and Zoe, because somebody believes that Mal was a terrorist at the end of the war. As usual, the Alliance soldier is off the reservation, and he also has the wrong Browncoat in his sights. Also, as usual, Mal is too stubborn to admit that. The relationships between the crew were captured really well, including some laugh out loud bits.

Float Out is a different kind of story. Three of Wash’s old frenemies are sitting around telling stories about him, planning to drink to his memory. The stories are funny, and very typical Wash incidents–his questionable charm, his even more questionable fashion sense, his insane love of plastic dinosaurs, and his willingness to do absolutely anything to save his friends. Zoe saunters in at the last minute and provides the drinks for the toast. “Wash hated champagne.” I’m sure he did. The drink Zoe brings is a “quick drunk, but lots of fun.” Sounds like Wash, doesn’t it?

The two stories in the middle didn’t stick with me, but these two did. Better Days because Mal didn’t have any dreams of what he would do with all that cash–his dream is flying Serenity with his crew, keeping his “family” together, and he knows it. Being rich hurts his dreams, it doesn’t help them. Float Out was a good-bye kiss to Wash, and it was fine one.

Escape Rating A: I escaped back to the Serenity for a little while. Enough said.