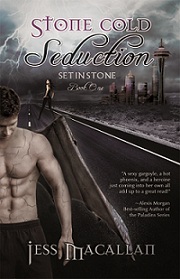 When first we meet our heroine, Elleodora Fredricks, she is in the process of burgling her sperm donor’s office building. As the story opens, Elle only thinks the jerk is spawn of Satan. By the time the book ends, Elle realizes he might actually be a demon. Or the next nearest thing.

Stone Cold Seduction by Jess Macallan opens with a kick-ass female Robin Hood clinging to the side of a high-rise in a catsuit. If our heroine had only thought her evil dad was just the usual corporate variety of evil, this would have been an interesting enough premise. But…

Elle has some serious memory issues, because Dear-Old-Dad isn’t just your typical corporate badass. Dad is the King of the Shadow Elves, and Elle feels like Alice tripping down the proverbial rabbit hole as all of her friends start revealing everything King Dad, AKA “the sperm donor” has deleted from her memory. It’s one of his powers that she has also been made to forget.

But now, Dad is after her, along with his goon squad. And so are all the other powers in his “Shadow World”. Because Elle hasn’t been stealing mere baubles like she thought she was. She’s been stealing something much more important. She’s been stealing “soul gems”, an item, and a concept, she didn’t even know existed a few days ago.

And her friends, her “crew” who have been helping her? They’re not who they seem either. Her best friend Teryl turns out to be an oracle. And the new man in her life, Jax? He answered an ad for a stockroom clerk at her store. But he’s really a gargoyle. Now he says he’s her fated mate.

And what’s this fate thing all about? Elle isn’t sure she believes in this destiny thing. A few days ago, she was happy running her custom perfume store, trying to right some of the wrongs her dad did. Now, not just her life but also her entire universe has turned upside down.

And in the middle of it all, a man from her past returns. And guess what? Not only is MacLean a phoenix, but he is also her fated mate.  What’s a girl to do?

Verdict: I really liked the Elle who was clinging to that building. The catburglar Elle was fantastic! But the more Elle finds out about herself and her lineage, the more she retreats into her 17-year old self, and that person is in a really bad place. I want to see Elle get her mojo back, and that’s not going to happen until the next book.

Because this is a series (Stone Cold Seduction is the first book of Set in Stone) I will say I liked Elle enough to want to see what she does next. At the end, I could see that she was starting to get her own back. Good on her.

At the end, Elle got to see her fate, and she has not one, but two fated mates, and it is her choice which one to pick. I’m looking forward to watching her make both men grovel in the next book!

Escape Rating: B in anticipation of Elle getting her groove back in the next book.