Today I’m pleased to host Jeanette Grey, who is touring the blogosphere to discuss her latest book, Unacceptable Risk, which I’ve also reviewed.  Jeanette is giving away one ebook copy of Unacceptable Risk.  To see how to get a chance to win, please read to the end of this post.

The Future is Fertile Ground 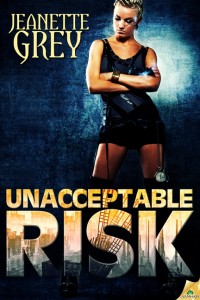 When someone says, “Science fiction,” what’s the first thing that comes to your mind? Let
me guess: Aliens. Lasers. Star Trek. Am I right?

So many of our preconceptions about science fiction run along these lines, and it’s entirely too easy to dismiss the whole genre as being dress-up for boys. Brainiac heroes run around wielding phasers, shooting at little green men while flying starships. The potential for cheese is as infinite as the galaxy.

But so is the potential for real, human drama, intense emotion, and stirring, sexy love stories. It’s just far too often left untapped.

I’m here today to talk about futuristic romance. It’s not necessarily a genre I intended to write in, but considering my mother is a “Trekker” (Trekkies are so tacky – or so she tells me) and my husband knows the Hitchhiker’s Guide to the Galaxy by heart, maybe it was just a matter of time. I grew up surrounded with science fiction stories, and over the years, they became the norm for me. And I found that, in the right hands, they can be so much more than we typically expect them to be.

Futuristic romance can take a lot of different forms. Sure, there are the space operas that immediately spring to mind, but that’s really only the tip of the iceberg. All that’s required is a little bit of imagination and a lot of curiosity about what the future will hold.

For example, my most recent release, Unacceptable Risk, began with wondering how two things would evolve over the next half-century or so: A) the integration of technology into our lives, and B) the increasing consolidation of power among corporations. As far as technology goes, I imagined that, considering how people (myself included!) are constantly connected to the internet, it was only a matter of time before we began building connectivity into our brains. The main character of the story, Plix, has a number of cybernetic enhancements, including devices that improve her vision and her dexterity, as well as a dataport in the base of her spinal column and a satellite hookup that feeds directly into her mind. When looking at corporate greed, I imagined that businesses would become more and more intertwined and corrupt, until they would do anything – including poisoning an entire city – to cement their power and improve their profits.

For there, I had a world. A dark, gritty, high-tech backdrop against which to paint characters and relationships.

I think futuristic settings are incredibly fertile ones for romance. There are inherent questions about what will become of our humanity, and what is more human than love? In worlds where machines threaten to erode our control, or where extraterrestrials mingle with humans, what is more affirming of all that is good about humanity than our need for connection? To what lengths will we go to find that spark? What will we sacrifice to be with the ones we adore? How will we put technology to use to enhance our experience as lovers, care-takers and partners?

So the next time a futuristic romance finds its way into your hands, consider abandoning your preconceived notions and opening your mind. The worlds that will be opened to you just might surprise – and delight – you.

Plix spends her lonely, gritty life trying to solve the mysteries her father left behind. Armed with a variety of cybernetic enhancements and a talent for getting into places she shouldn’t be, she searches for clues to his murder—and who’s responsible for poisoning her city.

Waking up on a street corner with her brain wiring fried to a crisp, she figures she must have gotten close this time. There’s only one man she trusts to pull her back from the brink: a tuner who can retrieve the evidence hidden deep in the recesses of her mind. A man she dares not let too close to her heart.

When Edison downloads a secret SynDate schematic from Plix’s burnt-out circuitry, he knows with dreadful finality that nothing—not even the fiery kiss he’s been holding back for years—will stop her from pursuing her quest past the point of insanity.

All he can do, as he helps her plan her final mission, is ease her pain, watch her back…and hope one of them doesn’t pay with their lives. 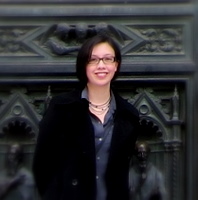 After brief, unsatisfying careers in advertising, teaching, computers, and homemaking, Jeanette Grey has returned to her two first loves: romance and writing.

When she isn’t writing, Jeanette enjoys making pottery, playing board games, and spending time with her husband and her pet frog. She lives, loves, and writes in North Carolina.

One lucky reader will get a copy of Unacceptable Risk in electronic format.  To enter, please make a comment on this post.  To make it fun, answer Jeanette’s rhetorical question: When someone says, “Science fiction,” what’s the first thing that comes to your mind?  The giveaway will be open until midnight EST on Thursday, December 22nd.  The winner will be randomly chosen from the commenters; only your first comment will count.

7 thoughts on “The Future is Fertile Ground: Unacceptable Risk Blog Tour and Giveaway”