Midnight Reckoning by Kendra Leigh Castle is something to read when you want a paranormal romance that takes all the standard elements and throws them in a blender! The mix that pours out makes for a very enjoyable read, while adding a few interesting twists to the usual recipe.

We met both the hero and heroine of Midnight Reckoning in the first book of Castle’s Dark Dynasties series, Dark Awakening (reviewed here). And when they met, they pissed each other off.

Lyra Black is a member of the Thorn, a werewolf pack. But Lyra is much more than just a member of the pack, she’s the Alpha’s daughter. And she’s an only child. Lyra wants what’s best for the Thorn, and she knows that her cousin Eric isn’t it. But the wolves have always chosen their Alphas through a physical contest, based on who is the strongest, fastest and cleverest. Females may be fast and clever, but they just aren’t as strong as the males. Traditionally, they don’t fight to become Alpha. But Lyra believes that Eric is so tradition-bound that he will lead the Thorn back to the human-enslaving dark ages, and in the 21st century, those days are long gone. Lyra has declared herself as a challenger for the right to become the Alpha’s Second, her father’s named successor. Being her father’s daughter will not help her. Her father wants her to mate with someone strong enough to fight in her place.

Wolves mate for life, and all that is required for the mating bond is sex. It doesn’t even have to be willing sex. Rape will cause the mating bond to lock into place. Lyra is being hunted.

Jaden Harrison threw Lyra Black out of a vampire sanctuary the first time he met her. Not so much because she was a werewolf, although there is that whole vamp/werewolf rivalry thing, but because he wanted her. Bad. And because there was no way he should feel that much desire for a wolf. Any wolf. He wanted her as far away from himself as possible, so he threw her out of the sanctuary. But he never forgot her.

So when he found her in his clan’s territory again, but this time threatened with rape, he helped her kill her would-be rapists. But he didn’t expect Lyra’s gratitude. He expected what he got. She took his head off. But only verbally. And only after stumbling into him and revealing, just for a second, that she wanted him as much as he wanted her. Even if it was inappropriate. And impossible.

She left behind a necklace, a talisman, under the body of one of the wolves that Jaden had killed. Since she had been protecting the talisman, Jaden chose to go into Thorn territory to return it.

Why? Because he was delaying decisions about his own future. His newly-formed vampire clan, the Lilim, wanted him to become Chief of Security. He wasn’t sure he was ready to become an officer, when he had so recently been a slave of the Ptolemy clan of highborns.

But when he returned the necklace to Lyra, he was faced with another, and much more tempting offer. Teach Lyra to fight wolves, so she could take her own place in the Alpha challenge.

Why would a werewolf ask a vampire to teach his werewolf daughter to fight other werewolves? And what temptations will Jaden and Lyra face as teacher and student? And what is really going on within the werewolf pack? So many questions, and so little time to find the answers when threats come from all sides.

Escape Rating B: The action in this was even more fast and furious than in Dark Awakening. But I think the story probably works better if you’ve read both books, although that’s far from a hardship. I liked Dark Awakening, and I would recommend for paranormal romance fans. Midnight Reckoning a fun and very fast read.

I am really starting to want some more information about the Shadows. They are clearly moving events and people behind the scenes, and their motivations are murky to say the least. I hope more of that is in the next book. Since the next book is titled Shadow Rising (July 2012) maybe I’m going to get my wish! 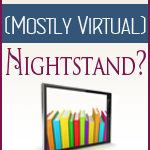