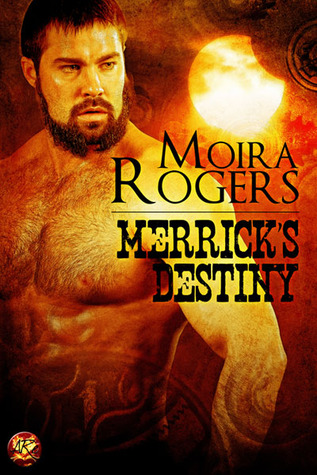 Merrick’s Destiny (exclusively available at All Romance Ebooks) by Moira Rogers is book 1.5 in her Bloodhounds series. It’s a very short and extremely steamy story that takes place between Wilder’s Mate and Hunter’s Prey. It stands alone well enough to serve as an introduction to this series, but it works even better if you’ve already read Wilder’s Mate!

Merrick Wood returns to consciousness in either the best of all possible worlds, or the worst. There’s a pretty woman straddling him, and he knows she’s his mate. On the other hand, there’s a crashed airship on fire about a hundred yards away.

That blazing inferno will act like a beacon to vampires for miles around. And there are plenty of vamps, since the ship crashed in the middle of the Deadlands. Merrick just has to get himself and his mate to safety before the new moon compulsion drives him out of his mind for three days.

Of course, if the lady is willing, it could be a very enjoyable three days–if the vampires don’t find them first.

Paralee Colton is an airship pilot. She’s always loved her freedom more than anything else in the world. Merrick just might make her rethink a few things if he can convince her that he wants her for herself, and not just a convenient female to spend his moon madness with.

Merrick needs to remember how or when or why she became his mate. Then he needs to convince her that she’s his destiny.

Escape Rating A-: This is a very fun, hot, short read. That being said, for a short story, it really does wrap up all the loose ends. One of the things that usually drives me crazy about short stories is that either the loose ends aren’t all tied up, or that I don’t find out enough backstory to understand how things got the way they are. Rogers ties everything up very well, and because this is book 1.5 in the series, it builds on some material established in Wilder’s Mate.

I picked Merrick’s Destiny initially because the cover absolutely floored me. The model, whoever it is, is dead-ringer for Jonathan Frakes from his days as Commander Riker in Star Trek Next Gen. The picture at the right is from the movie Generations, and the Enterprise-D is about to crash into a planet. But the resemblance to Merrick is startling to say the least.