The Zurian Child by Jessica E. Subject is the first book in her Mark of the Stars series. The actual “Zurian Child” of the title is a girl named Katrina (I wonder if naming her for the hurricane will be prophetic) but this first book isn’t really her story.

Katrina is a “chosen one”. She is fated to save her people. But she has to be born first. In The Zurian Child, readers are introduced to Katrina through the love story of her parents.

We also read of the harrowing exile of the Hemera people from their home planet, Alectrona. The very human-like Hemera flee to Earth just ahead of the monstrous Erebus, who hunt them across the stars.

Hemera mostly blend into the human population, with a few key differences. They have webbed toes, and hidden gills, so they can breathe underwater. Hemera pregnancies are faster than human, so instead of 9 months, it seems to be about 7 months for a full-term baby. And sex once equals mates until death. All those differences have consequences for our story.

Oh, and the Erebus definitely follow the Hemera to Earth. They like it here. This is NOT a good thing. Not for the Hemera, not for the humans, and not for the Earth.

Bryce was the last child to reach the Hemera ships before the Erebus wiped out the final city. His parents didn’t make it. He was adopted on Earth by a human family, but his Hemera guardian made sure he remembered who he was and where he came from. He kept an eye out for other Hemera who hadn’t been so fortunate.

His guardian, Lorne, had been his foster father on the ship. It was Lorne’s grandmother who had made the prophecy of the “Zurian Child”. the child who would be born with the “Mark of the Stars” and who would save the people. Bryce and others searched for that child among the second and third generation Hemera.

As a member of the RCMP, Bryce was also in a position to learn that someone was systematically hunting down the Hemera. The investigators were always one step behind.

Bryce spent his life concentrating on his search for the Zurian Child, and on his efforts to find and destroy the Erebus. He made sure never to get involved with anyone, because he knew it would mean a lifetime commitment. And he already had two of those: to his search, and to protecting his people.

Then he met Lindsay, and it was too late. She was already bonded to another Hemera, his friend and fellow officer Quinn. Even worse, the first time he shook Lindsay’s hand, he realized that she was his intended soul mate. And it didn’t matter. Her bond to his friend was already in place. All Bryce could do was be a friend and protector. And that was all Lindsay wanted from him.

But there were other factors in play. The Erebus were increasingly active on Earth, but their methods had changed. And they began to specifically target Lindsay and Quinn because they were the destined parents of the fated Zurian Child. And as far as the Erebus were concerned, the Zurian Child had to be stopped, at all costs.

Escape Rating B-: This was an interesting variation on the “chosen one” theme. it’s always fun to start with the parents’ love story — I liked Cordelia’s Honor much better than the early Miles Vorkosigan books! This has an added twist with Bryce as the “odd man out” in someone else’s love story, but it is so important that he be there. It’s a different, and painful perspective.

There are parts with the Erebus and their minions that were slightly squicky. Not because they’re evil, it’s about their collaborator. Read the book and you’ll see for yourself. Someone always gives in to the dark side, but the behavior of this person went a bit too far into the ick-factor for my taste.

The next book in this saga (trilogy?) is going to start focusing more on Katrina. She’ll be old enough to have a point of view and she’s very precocious, although that’s not the only issue. I’m curious enough about what’s going to happen to her next that I’m in for the next book.

(This review copy was provided by Sizzling PR. The author requested additional reviews around the time of the book tour that just wrapped up.) 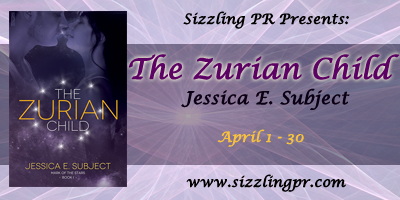 2 thoughts on “The Zurian Child”