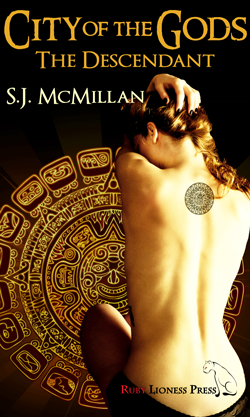 Maybe the Mayan calendar is right, and the world really is coming to an end. They just had the date a bit off. And things aren’t quite hopeless, or there wouldn’t be a story in it.

One other tiny detail, the ancient civilization involved wasn’t the Mayans, it was the Aztecs. But there’s still the whole “end of the world” deal. Except that in this case, there is one person, a Redeemer, who can prevent it. If she’s not stopped.

And the forces of evil definitely pull out all the stops trying to keep the Redeemer from fulfilling her mission. Even before she finds out she has one.

Katalina is that Redeemer. But she doesn’t know. Of course she doesn’t, because the story of The Descendant is Katalina’s journey.

The story begins with Kat at a crossroads. This is not an uncommon beginning for a hero’s (or heroine’s) journey. Not only has Kat just been fired, she came home to find her fiancé moving out of their apartment, with the help of his new girlfriend. Heated words were exchanged.

But when Kat meets her best friends at their neighborhood hangout, everything changes. First, it turns out that her BFFs are not quite what they seem. Sabine and Vivian are Kat’s bodyguards, although Kat doesn’t know that yet. Second, the club has gone upscale in the last week, and the new owner turns out to be hot for Kat.

And third, Kat goes out into the alley to get some fresh air after running into her recent ex — and her split personality evil side kills two drunks who try to rape her. Yes, you read that right. Kat has multiple personality disorder, and her dark side, a nasty piece-of-work named Lina, takes over whenever Kat can’t handle things. Drunken rapists definitely qualified.

Kat created Lina when she watched her parents die in an auto accident. Lina has nothing to do with being the Redeemer. At least not yet.

But the evil dude who watches the drunks attack her does. He’s the sworn enemy of Vivian and Sabine. His name is Damien. Once upon a time, he used to be Vivian’s fiance. Back in Teotihaucan.

Kat doesn’t want any of this. She wanted the life she had. But like the Rolling Stones said, we can’t always get what we want. Kat and Tristan are going to have to try very, very hard to get what they need.

Escape Rating B: This could have been a standard paranormal romance, but the author took some twists that definitely made it more interesting.

Choosing the Aztecs as the forebears for this history was a brave choice. The author doesn’t gloss over their historic practices of animal and human sacrifice, nor Kat’s revulsion toward them. Her job is to save the world in the present, not correct the past.

Kat’s psychological response to witnessing her parents’ death was to create a secondary personality, Lina, to handle the hard stuff in her life. Lina is a bad-ass. Re-integrating Lina into Kat becomes a necessary part of Kat’s journey to becoming the Redeemer. Still, that initial scene where Lina emerges was a WOW! The reader isn’t sure whether Lina is the Redeemer, whether she’s evil, or whether she needs to be exorcised.

Although Kat is very attracted to Tristan, she loses her faith in him, and all her friends, when she discovers how much they have concealed from her over the years. No matter how justified that concealment, Kat should lose faith. Talk a about a whopping big set of lies.

On the other hand, I didn’t get Damien’s initial motivation for turning to “the Dark Side”. He definitely was evil, but why it happened in the first place, all those years ago, wasn’t quite clear to me. He turned “bad” because the truly evil dude wasn’t punished enough? He betrayed his friends and his entire belief system for that?

I’ll need a better explanation, or a bigger evil, in book 2. But I definitely want a book 2! 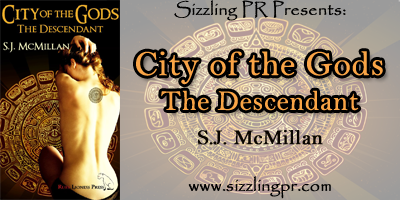 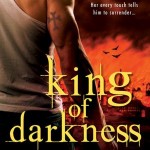 2 thoughts on “City of the Gods: The Descendant”