June is Audiobook Month according to the Audio Publishers Association. So it’s absolutely right and proper that one of my reviews this month be the audiobook version of the latest entry in one my favorite series. 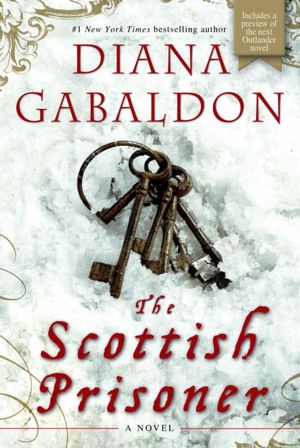 I listened to The Scottish Prisoner over the last week or so, and I was sorry to see it end. While this is the third in her Lord John series, it could be counted as the tenth, or tenth-ish, in one of my favorite reads, the Outlander series by Diana Gabaldon. (For more on my long-running love of this series, read my Lovestruck post)

But where the main line of the Outlander series can either be classified as historical fiction, time-travel romance or some lovely stew mixing the two, the related Lord John series is something else again.

Lord John Grey is a character in the Outlander series. He’s a member of the English aristocracy. He is an officer in his brother’s regiment. He’s a younger son, for which he’s quite grateful, because it means that he will not be expected to provide the family with an heir to the title.  Lord John is homosexual at a time when that was a crime. His family, or at least his brother the Duke of Pardloe, is certainly aware, but the understanding is tacit and not spoken. They are gentlemen.

Lord John Grey meets Jamie Fraser, the hero of the Outlander series, when he is in charge of Ardsmuir Prison, after the Jacobite Rising of 1745. As Laird of Lallybroch, Jamie is the highest ranking prisoner. They are, after a fashion, equals. They are not friends, but perhaps frenemies.

Until John betrays that almost-friendship by not merely letting his secret slip but by revealing that he desires Jamie–who is beyond appalled. And Jamie never trusts him again. Not even after John saves his life. With Jamie’s wife, Claire, gone back to her own time and lost to him, Jamie’s not sure he wants to be alive.

John Grey’s life centers around his military service. A younger son, with no family of his own, his career is as a army officer. He serves in his brother’s regiment. And that’s where he keeps getting himself into trouble. Because John solves, not mysteries quite, but problems. Usually military problems wrapped up in politics.

In the case of The Scottish Prisoner, the problem is that a friend, one of John’s exes, was a military attache in Quebec. He found evidence of military peculation, meaning that a high-ranking officer was cheating the Crown, and shortchanging his men, by selling off equipment and supplies. The officer in question was making oodles of money, but that practice is highly illegal. Treasonous, in fact.

John’s friend assembled the evidence, painstakingly, painfully, and died in Quebec. Entrusting John to see that justice was done to the bastard. Said bastard, naturally, being not just high-ranking in the military sense but also well-connected.

And holed up on his Irish estates. Ireland was practically a foreign country in the 1750s. Somehow, the military embezzlement was mixed up in something else, too. Rumors of an Irish Jacobite Rebellion.

That’s where Jamie came in. He was a prisoner, very loosely speaking, working as a groom on an estate in the Lake District. John needed someone familiar with the Jacobites to go with him to Ireland. His brother the Duke decided that Jamie was the perfect person, in spite of the fact that Jamie and John weren’t speaking.

If Jamie kills the aforementioned bastard, the Greys will have complete deniability. Jamie is, after all, a convicted traitor.

But he goes anyway. Because he’s afraid there might be a rebellion brewing. And he wants to prevent it. Jamie knows it will fail.

By the end, Jamie Fraser and John Grey discover that starting with the truth builds a better beginning for respect than a comfortable lie. But everything else they started out with was dead wrong. They began in an attempt to do the right thing. It turned out that they hadn’t a bloody clue about what that might be.

Escape Rating A+: I did not want to see this one end. Not at all. I wanted to find out how it all worked out, but I didn’t want it to be over.

Because I listened to this instead of reading, there are two “tracks” to this review, story and interpretation.

The Outlander story has a twenty-year gap, where Claire is in the 20th century, and she thought Jamie died at Culloden. We know where the gap has to end at, the trick for Gabaldon is to fill in the blank. This works. Jamie’s pain at Claire’s absence is like an aching wound, she is there in spirit, and we see the effect she still has on his life. But he’s still alive. And we see Jamie and John work their way back from loathing on the one hand and unrequited desire on the other towards the mutual respect they finally achieved by the time Claire reappears in Voyager. It was a very rough road.

About the reading. I am beyond pleased that Recorded Books used two narrators. The story has two very distinct points of view, John’s and Jamie’s. They resisted the temptation to have one actor voice both parts and had Jeff Woodman voice Lord John Grey and Rick Holmes portray Jamie Fraser. Based on the descriptions of these men in the series, they are such completely different physical types that they shouldn’t sound anything alike. Having two different actors voice them ensured that they didn’t in the reading.

The Scottish Prisoner will have to tide me over until Written In My Own Heart’s Blood, the next installment in the Outlander series. The projected release date is early 2013.

3 thoughts on “Lord John and The Scottish Prisoner”