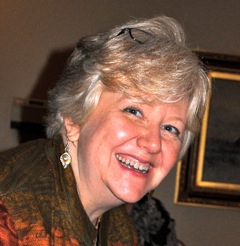 My very special guest today is author T.K. Anthony. Her amazing debut science fiction romance novel, Forge, is out now. (I finished it in one gulp and reviewed it here. Trying to write the review without revealing the name of the main character (see below) was difficult, but worth it)

Marlene: T.K., can you please tell us a bit about yourself? What do you do when you’re not writing?

T.K.: Marlene—thank you for having me! My eldest sister (the MaryBeth in Forge’s dedication) is a librarian, too. I have a huge respect for the keepers of the keys to the knowledge kingdom. And I am awed by your ability to cater to four cats. I have two co-owners, and I know the saying “Dogs have masters, cats have staff” is no joke. I’m looking forward to spending time with you and your readers.

Family is important to me. I come from a large family; my husband’s family is even larger. So we spend quite a bit of time visiting relatives. This summer was a madhouse of weddings, reunions, picnics…and, sadly, two funerals…in Illinois, Pennsylvania, Michigan, Texas, and Ohio. When I’m not writing, or on the road (or both) I’m reading, doing crosswords or sudokus, baking, and playing way too much Spider solitaire. And singing. A lot of singing, with some guitar pickin’ thrown in. And a smidgen of mandolin.

The hero, Keir, gets into dire trouble right from the start. An unidentifiable and nameless amnesiac (“Tazhret” means “Nameless” in the Tormin tongue) Keir’s sold as an indentured servant to an abusive master. He needed some reason to hope, to endure…even if his hope is only an elusive vision of an unknown woman who tells him he has a good name, despite all evidence to the contrary. He’s not even sure if Nica is real. He thinks she might be just another remnant of his drug-induced hallucinations.

Only later, as I got into the story, did I realize that Keir and Nica’s relationship is the crux of the whole story: the power of unconditional and sacrificial love in the face of evil. I had no idea the tale would go there, when I first opened a file and just started to describe the picture I had in my head.

Marlene: Have any of the places that you’ve traveled to made their way into the intergalactic scenes in your science fiction? 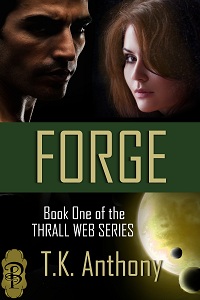 T.K.: Some of both. I get scenes in my head, which tend to be key events in a story—sometimes, right down to specific lines of dialogue. I’ll start to write based on those scenes, just to see what direction the story wants to take. Then, I’ll sit down and put together a rough outline, finding the steppingstones between the key scenes. But the characters have the right to veto the outline. When they do, I feel like I’m walking a wire over a snake pit without a net…but they’ve never let me down.

Marlene: What was the first moment you know you wanted to write?

T.K.: Ever since I read Little Women in second or third grade (it might’ve been the summer between). I idolized Jo March, tomboy and writer. But although I wrote a few stories for the entertainment of my sisters and close friends, I didn’t really think I’d write published fiction. Where would I get the ideas? It wasn’t until I had some real trauma going on in my life that writing became my outlet…and the ideas just wouldn’t stop.

Marlene: From your blog, I can tell that music is a big part of your life. Was there a “playlist” for the writing of Forge, or are there some tunes you recommend that might serve as “themes” for some of the main characters?

T.K.: What a great question about main characters’ theme songs. The best answers can be found in Celtic folk.

Keir saves himself from getting recycled with the trash by singing, in a roaring drunk, “Star of the County Down”—which has lines about “the maid with the nut-brown hair,” and “I shook myself to see I was really there.” Clearly a reference to Nica, the beautiful woman of his drug-induced visions. (And, yes…I realize this is an Irish song, with Irish place names in a mostly Scots-influenced tale. But the reference is very oblique, and the lyrics were otherwise perfect, and it is the kind of song you can sing after you’ve hoisted a few…I’m sure that’s why Keir thought of it for Nica. :D)

For Keir, the Scots’ folk song, “Will Ye No Come Back Again?” The tune and lyrics are full of love, longing, and loyalty. For Col, I think the best song is “Minstrel Boy”—he’s someone who’s spent his life in service to the Scotian Realm, no matter the odds or the cost. And for either of the villains, Saril or Gar genZeren…my mind jumps right to Darth Vader’s theme from Star Wars!

I don’t always listen to music when I write, but when I do, it’s got to be instrumental. I get really distracted by lyrics. Some of my favorites, when I was writing the chase scenes, were from the group Blazing Fiddles out of Ontario Canada, and Bela’ Fleck’s hard-driving bluegrass banjo, or the alternative jazz of his “Tales of the Acoustic Planet”—music that holds a lot of Celtic flavor, so it was perfect for my Scotian ‘verse. Christopher Parkening’s amazing guitar work on his “best of” CDs made a great accompaniment for some of the softer scenes.

Marlene: What can we expect of Forge?

Because the story is big, I should mention that there is a cast of characters…but you’ll have to scroll to the end to find it. Decadent’s standard practice is to put it up front. But one of the characters doesn’t know who he is when the book begins, and another is traveling incognito, so reading a cast of characters for Forge is the ultimate spoiler. But some people like to read the last page of the whodunit first!

Marlene: Will there be more books in this series? (You did say it was “book one of the Thrall Web series…) What is next on your schedule?

T.K.: The working title of the second book is Web of Destiny. I’ve got it drafted, and am now editing it—using all the lessons I learned from working on Forge with my wonderful editor, Laura Garland of Decadent Publishing. Meanwhile, a contemporary fantasy is peeking out of the shadows of my mind.

T.K.: 1. Because everyone needs a trip to escapism, and a wormhole to the Scotian Realm is just how to get there.

3. Because I need to feed my cats! (You know how demanding they can be be…) 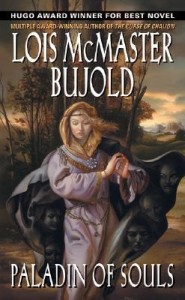 T.K.: I don’t know about a particular book, but I always recommend a particular author: Lois McMaster Bujold. If you haven’t read Bujold…you’re missing a rare treat. Whenever her latest book comes out, I sit down with some homemade cherry cordial (my sister makes it) and some Dove dark chocolate, and indulge in unforgettable characters, excellent plots, pithy dialogue full of wit, wisdom, and humor.

Marlene: Just how do your cats (Pip and Taz) collaborate in your writing? (Mine are a demanding nuisance) What’s your secret?

T.K.: My cats insist they are not nuisances, so my secret is in redefining the word “collaboration” to include Pip hovering over me on the back of my chair, and Taz laying his head on my wrist—or on the keyboard—while I type. They are equally collaborative in household tasks; for example, when I make the bed (flinging themselves under the sheet and coverlet), or do laundry (diving into the basket of clean clothes out of the dryer). My husband tells me I don’t have to put up with that. I don’t know what he means….

Most definitely a night owl. I once had my handwriting analyzed by an expert who had worked with the FBI and police. She took once glance at what I’d written, and said, “You are not a morning person. No matter how early you get up, you’re not firing on all cylinders until 10am.” She gave me a great respect for graphology!

Thanks again for allowing me to visit, Marlene! And good luck to the folks who comment today. In addition to the blog tour prize of the $20 Amazon gift card, they’ll be eligible to win another Decadent title in the e-format of their choice.

Thanks, T.K. for such a fantastic interview. I’ll say that Web of Destiny can’t come soon enough for me. But about re-defining what the cats do as “collaboration”, good luck on that one! Mine have discovered a new super-power. Instead of omniscience or omnipotence, LaZorra aspires to omni-nuisance…and totally succeeds! 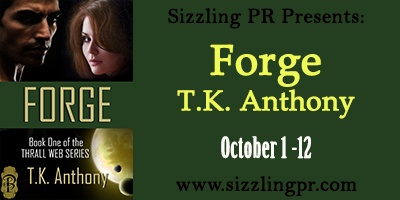