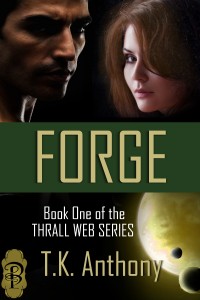 Warned by a Seeing…

The high king of the Scotian Realm expects the arrival of an enemy, a race of psychic predators bent on galactic conquest. The Realm’s one hope is alliance with the neighboring star domains in defense of a shared colony, Forge.

Mindblind, amnesic, Tazhret lives out his drug-induced visions of servitude on Forge. He wants to believe the beautiful woman with the nut-brown hair who whispers reassurances to his harrowed heart: “You have a name.” But is she even real? Or just one bright thread in his dark dreams?

Tazhret’s destiny leads him to freedom and the woman he yearns for—and to a desperate struggle against the enemy.

Tazhret can save Forge, and the clan of his beloved. But only at the cost of all he has hoped for: his name, his freedom, and his love for the woman with the nut-brown hair.

Forge is the name of a planet in T.K. Anthony’s amazing combination of space opera, science fiction romance, and interplanetary intrigue.

It’s also a metaphor for the transformation of the characters in the story from merely human, into the roles that have been cast for them by destiny. Forges create weapons by fire, hammer and strength. The weapon being forged gets pounded on–a lot.

The analogy holds up all too well for the characters in this story. The mindblind slave Tazhret in the book blurb, needless to say, he was not originally a slave. And how he got into that condition, uncovering that is just the beginning of a vast, galaxy spanning plot.

The woman with the nut-brown hair, she’s real all right. And he shouldn’t have had the ability to find her in any dream state, even before he was mindblinded. But there’s that destiny thing again.

They have, not just one star-empire to save, but three. Three races who will all become slaves if they don’t uncover all of the deeply laid nefarious interlocking plans, before it is too late.

If you’re thinking that the slave is going to turn out to be a prince in disguise, you’d be wrong. He’s not. We’d call him an engineer, but among his people, the Scotians, it’s a bit more complicated.

But complicated in a spell-binding way. Rescuing the slave, restoring him to his true identity, starts a chain reaction. The conspiracy that made him a slave stretches back decades, and across the galaxy to the deadly enemy of the Scotian Realm, the Khevox Dominion. The Khevox once enslaved the entire Scotian people, and stands poised to make history repeat itself.

Unless one slave can defeat them. Again.

Escape Rating B+: I did think Tazhret would turn out to be a “lost prince”, and was surprised (and pleased) to discover that the author had not done anything nearly so obvious.

Instead the tale spins into intergalactic plots involving chillingly evil methods and villains who operate from the shadows.

What enthralled me was the way that the story kept peeling back, layer after layer, from a simple tale of one man’s fall into ruin, to something that encompasses empires. And a love worth any, and every sacrifice.

What drove me absolutely crazy was that the story is not complete in one volume. Forge is book one of the Thrall Web series. Fine and dandy. The series is off to an amazing start. But Forge ends on an absolutely hellish cliffhanger, and there is no projected publishing date for book two in the series.

Not fair. Are they saved? Are they damned? When will readers get to find out? 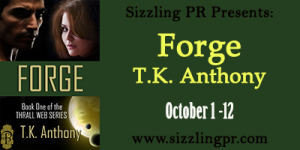