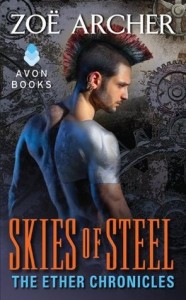 In the world of The Ether Chronicles, the Mechanical War rages on, and appearances are almost always deceiving . . .

The prim professor
Daphne Carlisle may be a scholar, but she’s far more comfortable out in the field than lost in a stack of books. Still, when her parents are kidnapped by a notorious warlord, she knows she’ll need more than quick thinking if she is to reach them in time. Daphne’s only hope for getting across enemy territory is an airship powered and navigated by Mikhail Denisov, a rogue Man O’ War who is as seductive as he is untrustworthy.

The jaded mercenary
Mikhail will do anything for the right price, and he’s certain he has this mission—and Daphne—figured out: a simple job and a beautiful but sheltered Englishwoman. But as they traverse the skies above the Mediterranean and Arabia, Mikhail learns the fight ahead is anything but simple, and his lovely passenger is not entirely what she seems. The only thing Mikhail is certain of is their shared desire—both unexpected and dangerous.

The Mechanical War is a damn big war. If the first “world war” were fought, just a bit earlier, and with “ether” instead of guns and tanks (and still a few horses), would you get something like the war that Archer and Rosso have envisioned in their Ether Chronicles?

In this third glimpse into their fascinating construct of man/machines, airships and ether-powered horses (after Skies of Fire (review) and Night of Fire (review)) we see a totally different place and perspective. Skies of Fire showed the good guys (the Brits) and the perspective of those who serve her. Night of Fire switched to the Western U.S., but again, showed us folks wearing uniforms and/or badges fighting the good fight.

Skies of Steel gives us rebels. Han Solo as a bionic rebel and completely mercenary Man O’War helping a female Indiana Jones to ransom her parents from the desert warlord who kidnapped them.

Let  me explain…in this steampunk universe, the process that makes a man into a Man O’War, a man/machine, infuses his body with the metal telumium, and permanently bonds him to his airship. And absolutely vice-versa. So when Mikhail Mikhailovich Denisov goes rogue from the Russian fleet, his airship goes with him. He’s not the only rogue Man O’War, but governments don’t like to talk about their rogues. (Mikhail is also the man with the mohawk on the cover of the book. He likes the style. Really.)

Daphne Carlisle is an anthropologist who prefers studying cultures in the field to the academy. She may look like a simple academic, but she’s anything but. She’s equally deadly with a gun, or a deception.

Daphne deceives Mikhail over and over. Only one thing remains true. She will say, or do, absolutely anything, even the seemingly impossible, to save her parents. After the first lie is revealed, he should abandon her, take his ship, and leave. There is no profit in this fool’s venture for a mercenary.

But he stays and helps her anyway. With all her deceits, with all her tricks, Daphne has done one true thing. She has kept him from being bored and lonely. Her true quest to rescue her parents challenges him to find his own true heart, if it still exists.

After all, what mercenary would keep going on a job with no profit? Unless he’s pursuing something completely different?

Escape Rating B+: The terrific part of all the books in this series so far have been the two leads, and Mikhail and Daphne are no exceptions. They are fantastic. Mikhail’s increasing ennui, his boredom, his heartbreak at the loss of his family and purpose in life, while still feeling oh so responsible for his ship and crew is intense. He can’t let anyone down, but he’s already let himself down, and he’s not sure what he’s living for.

Daphne is desperate and courageous in her desperation. She doesn’t fit into the academic life, she belongs in the field. She’s so capable! She never needs to be rescued, what she needs is a partner.

The rescue of Daphne’s parents, all the different tasks Daphne and Mikhail had to perform, that was fantastic. (It also would have made an awesome video game!) You could feel them knitting together as a team.

But what did bother me a bit was the insta-connection in the beginning of the story. We never do find out why. They fall into instant rapport with each other. The other stories in this series were “second-chance at love” scenarios, where this one seemed to take the insta-connection as a short cut. (Maybe it’s the Han and Indy thing. He fell in love with himself after all!) 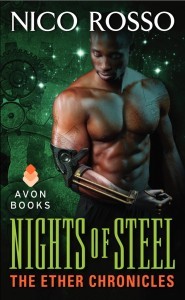 But I still raced through the book and can’t wait for the next one in the series, Nights of Steel. Next month.

2 thoughts on “Review: Skies of Steel by Zoe Archer”