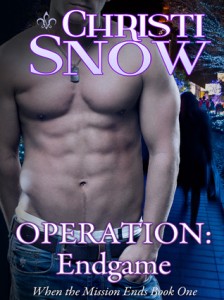 Six months since the passion between Jake and Cassie, Chris’ sister, stepped over the line.

But now Cassie’s being stalked and it’s time for Jake to swallow his guilt, grief, and lust so he can save her life, even if it’s a life without him. He owes it to his dead friend and he owes it to Cassie. He’s fallen in love with her, but she doesn’t have to know that for him to keep her safe.

Operation: Endgame is a marvelous friends-into-lovers romance which manages to have both an alpha male military hero and a kick-butt heroine who not only rescues herself in the end, but also rescues the hero of one of the later books in this When the Mission Ends series. Not a bad day’s work, all things considered.

There’s a reason that the friends-into-lovers trope is a tried and true one. When it’s done right, it gives the love story a whole lot more depth than the insta-love connection that’s much too common in romance these days.  Operation: Endgame does a terrific job at filling in the long story of Jake and Cassie’s childhood bonding. Along with Cassie’s twin brother Chris, they were the neighborhood’s Three Musketeers. Those ties still run deep, even though adult responses have put a little distance between Cass and Jake, they are still best friends. They’re both too afraid to let their attraction to each other ruin the most important relationship in their lives.

But Chris’ death behind enemy lines changes all that. Chris and Jake are both in Air Force Special Operations, but Chris’ job was to infiltrate, and Jake’s duties are in the Pararescue Jumpers. Jake gets soldiers out after everything goes pear-shaped. But because bad weather moved in, he wasn’t able to rescue Chris. The Air Force declares Chris dead based on his dog tags, his uniform, and not much else.

One thing this reader has learned after many too many of the right (or wrong) kind of books–if the body is burned beyond all recognition, it’s never the right body. So when Cass starts having “twin dreams” that Chris is being tortured, it was obvious foreshadowing that he was alive and being tortured.

Two things happen in the wake of Chris’ death. Jake and Cass finally spend one glorious night together. Which Jake, being an idiot, believes is the result of him taking advantage of Cass in her grief. He leaves in the middle of the night.

And someone starts stalking Cass, naming himself after the main villain in the military strategy video game that Cass consulted on (Cass is an expert on military strategy). As the stalking escalates, Jake realizes that he has to come back home to protect Cass, no matter how he feels. He thinks she deserves better than the man who wasn’t able to save her brother.

Of course, he never asks her what she wants, or what she thinks she deserves. And that stalker has some pretty fixed ideas of his own on that score. Potentially deadly ideas.

Escape Rating B+: I loved the friends-into-lovers part of the story. Jake and Cass’ relationship, and the twists and turns in how they got from childhood friendship to adult partnership, were very well done. While I referred to Jake as an idiot, his idiocy was completely understandable within the context of the story.

On the other hand, while the suspense was fun, I found it fairly predictable. As soon as it was revealed how Chris’ body was identified, I knew he was still alive. That plot device has been used many too many times, including last week’s NCIS episode. 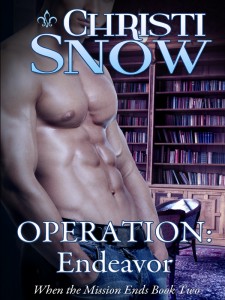 Likewise, it was blindingly obvious who Cass’ stalker was from the first moment the character was introduced. I will admit that his reason for stalking her turned out to be a surprise. Also a bit “over-the-top”. Someone that completely unbalanced would have had a hard time maintaining the kind of extensive criminal enterprise this guy was running.

But the mix made for a terrifically fun story. I had a fantastic time reading it and I can’t wait for book two in the series, Operation: Endeavor. 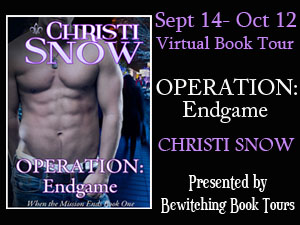