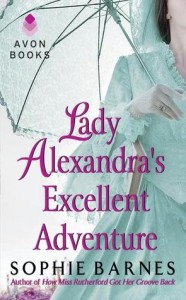 It’s going to be a wild ride…

Lady Alexandra Summersby is not your average society miss. Not only is she more likely to climb a tree than she is to wear a dress, but she has also sworn off marriage. Alex loves taking chances, which is how she finds herself embroiled in a secret mission as she races across the country with the Earl of Trenton. But Alexandra is about to discover that the real danger lies not in duels, but in her completely unexpected reaction to Lord Trenton’s company.

Michael Ashford, Earl of Trenton, is a man of duty. Honorable, charming, and a hit with the ladies, he’s never had trouble staying focused—until now. Lady Alexandra is like no other woman he’s ever met, and suddenly the prospect of marriage seems far more appealing. Now, to convince Alexandra that a life together could be an adventure like no other…

Sophie Barnes specializes in creating Regency heroines who seem improbably larger-than-life, and then making their square-peg-in-the-round-hole characters seem, not just reasonable for their particular circumstances, but absolutely the right woman for whatever normally staid and conventional male starts out attempting to shave off the edges of their unique charms.

Take Lady Alexandra Summersby for example. Every male in her entire family seems to work for the Foreign Office. In other words, she’s the one female in an entire family of spies. Her mother is deceased, and if it wasn’t tragic, I’d say the poor woman died of fright.

But Alex was raised in the trade, so to speak. With every single member of her family in the secrets business, it is somewhat logical that she be able to defend herself. If anyone’s cover is blown, she’s a target. The only problem is that Alex is much too good at it. She’s a much better with the sword than either of her brothers. She’s much better at most of the “trade” than her brothers.

So when her oldest brother, William, is accused of colluding with Napoleon (instead of being the spy for the English that he really is), Alex gets herself attached to the investigation, with her father’s consent. Her younger brother Ryan goes along as chaperone.

The man leading the expedition, Michael Ashford, Earl of Trenton, thinks he is taking the two younger Summersby sons to France to investigate the case. Only when the party arrives in France does Alex reveal that she is Alexandra. Michael is angry, not only at the deception, but at the danger that a woman brings to the investigation. He does not see the possibilities.

Alex does not see that there is danger. She can defend herself. Very ably, too. But she has never dealt with the possibility that men will attack her, and in numbers, simply because she is a woman with a sword.

Michael tries to force her back into a conventional role, one that Alex cannot occupy. She loves herself as she is. She will never be a demure miss. No matter how much she has discovered she wants to attract Michael’s attention.

Alex is afraid to love. And it turns out that Michael will settle for nothing less. In the middle, there remains the question of Alex’s brother William. Exactly who is he working for in Napoleon’s court?

Escape Rating B: Spies never occupy a conventional role in society. So the idea that Alex might be as unconventional as she is in this story, while surprising, isn’t all that hard to swallow. It just made her more interesting to watch. Her naivete that her sword would protect her from all the problems of being a woman travelling as a man did seem just that, a bit naive.

In so many recent Regencies, in order to make the heroine a person that modern readers can identify with, the authors have resorted to using bluestockings as heroines. While I enjoy the bluestocking heroine as much as the next reader, being one myself, it is refreshing to see a story where the heroine is a woman of action. It’s a tad unconventional, but it works. There are always non-conformists. And spycraft is one of the oldest professions, one in which women have always taken part.

Michael needs a wife, but he also needs a partner. Someone who won’t bore him. Someone who understands his service with the Foreign Office. Alex challenges him. Her family also serves the Foreign Office. They can work together, if she can get past her fears, and if he can get past his conventionality to figure out that her very unconventionalness is what he really needs.