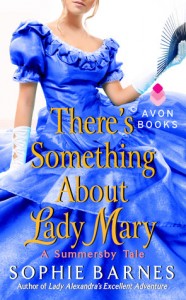 Mary Croyden lives a simple life . . . and she likes it. But when she inherits a title and a large sum of money, everything changes. Forced to navigate high society, Mary finds herself relying on the help of one man—Ryan Summersby. Determined not to lose her sense of self, she realizes that Ryan is the only person she can trust. But Mary’s hobbies are not exactly proper, and Ryan is starting to discover that this simple miss is not at all what he expected . . . but just might be exactly what he needs.

The outline for There’s Something About Lady Mary has some similarities to the first book in the Summersby series, Lady Alexandra’s Excellent Adventure. A man who thinks he is quite conventional but actually isn’t falls in love with a woman who is very unconventional. But because he thinks he is conventional, he spends much too much time trying to change the reasons that attracted him in the first place. Sparks, tension, and misunderstandings ensue.

The role reversal in Lady Mary’s story is that the conventional male is Lady Alex’s brother Ryan Summersby. After having grown up with Alex, he really should have known better than to think that a simpering society miss would actually suit him in the first place!

Ryan is tasked by a friend, the head of the Foreign Office, to keep an unofficial eye on Lady Steepleden, by any means necessary. Meaning that if he has to fake an affection, that’s just fine with Lord Percy. Lady Steepleden might be in danger.

The problem is that until Lady Steepleden returned to London, she had no idea that she was Lady Anybody. As far as she knew, she was just Mary Croyden, the daughter of an exceedingly excellent surgeon. She never knew that her father was the Marquess of Steepleden, or that he’d petitioned to have her inherit his title and his estate. All she knew she’d inherited was his medical instruments. Her father had taught her all he knew, even if she couldn’t be licensed as a surgeon in England. On the battlefields in Europe, no one had cared that she was female, only that she could save their lives. And she had.

And Ryan discovered that his assignment was less onerous, and more dangerous, than he ever expected. He thought he’d be protecting some society chit he wouldn’t be able to stand to be around.

Instead he found a woman who challenged him at every turn. But one who couldn’t see through her own insecurities to believe that he might find her attractive, especially not when their initial relationship began on a foundation of lies

But before they can find a future, they have to figure out the past. If they live that long. And if they can keep their misunderstandings from tearing them apart.

Escape Rating B+: The author was very careful to include her historical precedents for Mary’s medical practice in her notes. She knew that the first question that would crop up would be whether a woman could or did practice during the Napoleonic era. Apparently the answer is yes. Along with a whole slew of other medical precedents. Just because something wasn’t regular practice didn’t mean it wasn’t known.

About the story, again, this was fun to read. The suspense angle kept the pace cracking along. Trying to figure out what Mary’s father had been investigating that had gotten him killed, and who had betrayed him, heightened both the drama and the pathos, as it was his friends and colleagues who  had turned on him.

Watching Mary and Ryan negotiate their relationship formed the core of the story. Ryan has to change his conventional attitude, but Mary has to compromise. Unlike Alex, Mary can’t continue doing exactly what she’s been doing–London is not a war zone. But Ryan has to find a way to bend, a lot, to make it work. The solution they find seems realistic, in the circumstances. They fit. 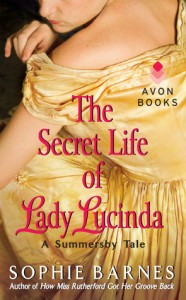 I’m looking forward to older brother William’s story, The Secret Life of Lady Lucinda. I can’t wait to see what sort of woman turns out to be his match!

One thought on “Review: There’s Something About Lady Mary by Sophie Barnes”