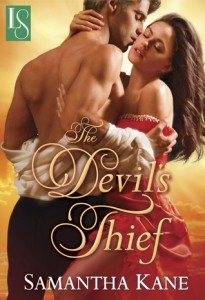 The daughter of a reformed jewel thief, Julianna Harte knows a thing or two about stealth. When the foundling home she provides for finds itself in dire financial straits, Julianna is forced to do the unthinkable. In a bit of misguided Robin Hood derring-do, she slips through the window of a wealthy rake to search for a treasure she knows is there: an invaluable pearl. But when the towering and very naked occupant of the moonlit bedroom ambushes her with a bargain—a night in his bed in exchange for the pearl—Julianna doesn’t know if it’s masculine heat or sheer desperation that makes his terms so tempting.

Alasdair Sharpe had no intention of keeping his end of the bargain. Planning to offer his little cat burglar carte blanche instead, he promptly loses himself in the delights of unexpected pleasure. But when he awakes the next morning to find his family heirloom gone, fury quickly replaces sensual languor. Of course, Alasdair is more than willing to use seduction to reclaim his stolen pearl—and find the key to Julianna’s heart.

Midnight burglars either have to be very, very good, or very, very lucky. Julianna turns out to be a little bit of both, and neither.

She also seems to have forgotten that some, maybe most, of her father’s skill rested on his ability to charm the petticoats off a number of his marks. Julianna gets off easy in one aspect of her first foray into the family business–her first mark isn’t wearing anything at all.

The Devil’s Thief is a romance, and a comedy for the most part, of misunderstandings. That’s what makes it so much fun.

While Julianna steals the pearl in order to pay the rent on the foundling home she supports, her reasons for not asking her father and step-mother for assistance turn out to be a misunderstanding.

But then, so does her father’s misunderstanding of his new wife’s issues with the foundling home itself, which are the reasons he is less supportive than he used to be.

Alasdair thinks Julianna needs the rent for herself. When he finds out she is his neighbor, he is mortified to realize that they have met, and that he totally overlooked her. That she dressed and acted in a manner designed to cause that very reaction makes him feel even more deceived.

Her determination to remain independent, and his to protect, keep them dancing around their feelings for each other until the very end. Almost to the very bitter end.

These two lovers require the help of all their friends, and even some of their enemies, to figure out if they can find a future together-one without too many misunderstandings.

Escape Rating B-: I read this all in a single froth-whipped gulp. It’s fun. The plot runs from one charming misunderstand-dammit to the next, but it’s meant to. The reader, and all the side-characters, are too busy watching in amused horror as these two lovers careen past each other in increasingly insane attempts to steal back the original pearl without putting the other in danger, and all in vain. Meanwhile discovering that both their original reasons for this mess might have been unnecessary, except as a means to get their lives on the track they should have been in the first place.

The most interesting character in this story might be Wiley, the gang-leader who helps Julianna. I can’t wait to see what he turns into.

We get some very teasing hints that every single one of these men is a “gentleman” in name only. And that all of them have something that they are either trying to forget, or otherwise are looking to replace something in their past that they lost.

They’re all very bad boys, but they seem to be bad for a reason. I can’t help wondering what those reasons are. Hopefully, we’ll find out in the rest of the series.

3 thoughts on “Review: The Devil’s Thief by Samantha Kane”