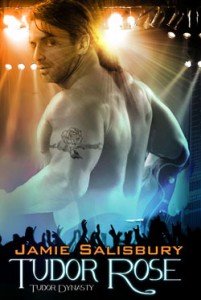 Amadeus Tudor is rock star royalty. Tudor is part of a musical dynasty, who has risen to a level of fame usually seen once in a lifetime. He’s the front man for Tudor Rose, one of the top selling, most beloved rock bands in recent memory.

Zara Middleton, long time former manager and publicist to Tudor Rose has been brought back into the fold, this time as Amadeus Tudor’s personal body guard. Someone is out to harm Amadeus, the question is who. And why would someone want to harm him? He has no known enemies, his fans as well as his business associates adore him.

As the new tour gets underway, unsettling things begin to happen and Zara wonders who among Amadeus’s new management team she can trust.

The tour also finds Amadeus and Zara inseparable. As Zara becomes aware of long ignored feelings and emotions toward her former client, Amadeus takes charge, determined not to lose the only woman he’s truly loved again. 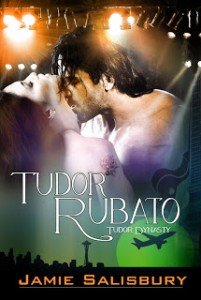 Having survived a near-death experience all Amadeus Tudor wants to do is escape to the countryside of Scotland with his wife Zara so the two can have some much needed down time together as a couple and work on rebuilding their relationship. Life for the past couple of years, however has been “a long, strange trip (it’s been)”* for the internationally acclaimed rock star, with no signs of stopping.

The change of scenery proves exactly what Amadeus needs to reboot his songwriting and his all encompassing bond with Zara. Together they embrace their new adventure as slowly Amadeus, with the guidance of music icon, Peter McNichol embarks on what promises to be another notch in Amadus’ career.

The road is full of twists and turns for the pair as one moment finds them frolicking in the meadows outside Edinburgh to the next learning the shocking and sinister side of one of Amadeus’ own brothers.

In Tudor Rose Zara Middleton lives that dream, and discovers there’s a nightmare at the heart. Not with the love of her life, Amadeus Tudor, but with someone in the shadows around him. Zara used to be Amadeus’ manager, but she left. Working with him wasn’t enough when all they could be was friends.

When she returns, she discovers immediately that what she felt wasn’t one-sided. But the threat she’s there to combat is also real. Zara came back because someone is sending threats, and it seemed easier to find out the truth from the inside of the tour. So while Amadeus’ band, Tudor Rose, tours, Zara goes along as his girlfriend, and later his wife.

The attacks escalate, someone is sowing dissention among the other band members, causing friction on and off the stage. Then things get violent, and the story ends in a near tragedy. Amadeus is attacked by stealth. Someone poisons him at a party.

Tudor Rubato picks up six months later. Amadeus is finally out of a long coma, but the cost was dear. Zara lost the baby she was carrying. Their marriage and partnership are in trouble.

While their situation is in turmoil, the attacks continue, on the personal and professional fronts. The perpetrator turns out to be much closer to home than anyone could have suspected, or even feared.

No amount of money or fame in the world can protect someone when their family betrays them.

Escape Rating B-: Tudor Rose gets off to a very fast start. There’s so much history between Amadeus and Zara, it almost reads as if there was a story that took place before Tudor Rose that we haven’t seen. (If there isn’t, the story before they get together might make a great prequel.)

The rock star who helps move Amadeus’ career to the next level, seemed so familiar, I actually googled him to see if he was real. He’s not, but he ought to be. The band fracturing read as if it were ripped from an issue of Rolling Stone, although the reasons behind it turned out to be much nastier.

It’s hard to rate these separately. I read them back to back, and they read as a single story. That being said, Tudor Rubato ends on a terrible cliffhanger. I hope it’s not another year before we find out what happens next!