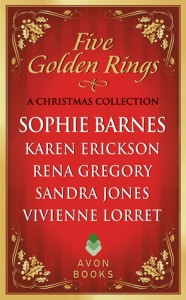 The holidays are a time for wishes, magic and, of course, love. Celebrate the season with this delightful collection of Christmas tales. What better way for Connor Talbot, Earl of Redfirn, to spend the holidays than convincing Leonora Compton that the only match she needs to make is with him!

The Duke of Ashton has had three years to plan for his perfect Christmas present—the Lady Eleanor Fitzsimmons as his wife. Now, all he has to do is convince the reluctant lady …

Phin Baldwin does not believe in Christmas magic … until the clever and beautiful Ginny Overton gets it into her head to show him how wonderful it can be when wishes come true.

Just returned from the Crusades, marriage is the last thing on Sir Caerwyn’s mind. But will he be able to resist Lady Nia, the thief of his boyhood heart, when she tempts him yet again?

Responsible Ethan Weatherstone is determined to save Penelope Rutledge—and her reputation—from her silly scheme, but can he save himself from the temptation of her lips?

There are five stories in this collection. And I read them all and definitely enjoyed them. But these are the two that stuck with me after I’d turned the last page.

Tempting Mr. Witherspoon by Vivienne Lorret takes the friends into lovers trope, dresses it up in Christmas wrapping paper, and does it proud.

Penelope Rutledge and Ethan Witherspoon have been close friends since childhood. Their families met when Penelope and her father moved in  to the estate next to Ethan and his mother, after both had been widowed. Ethan and Penelope shared the tragedy of losing a parent much too young.

Since then, they have both had a need to maintain order, but Ethan much more assertively so than Penelope. Now Penelope is in her 20s, and other needs are rising to the surface. She wants a family of her own. Her own children. A husband. And she loves Ethan. She always has. But Ethan is unwilling to risk their friendship. It would upset the order of things.

Penelope knows that she must leave if she is ever to get over Ethan and have any chance at happiness. Or even contentment. Ethan is certain that all of her plans for leaving represent a risk to her reputation, that they are all dangerous to the order of things. To the order of his well-ordered life.

But will he see the truth before it is too late?

This was a beautiful family story. And a sweet love story. Escape Rating for Tempting Mr. Witherspoon: B+

War of the Magi by Rena Gregory was simply terrific. This is also a story about a young woman with a widowed father. Ginny is also in her 20s, and also has just a bit of fancifulness in her very well-ordered life.

Ginny helps her father manage the shop in their village, but she does want a life of her own. It’s just that there hasn’t been a man who interested her, and her father does need her.

Her villlage has a tradition about the gifts of the Magi. Not the actual Bible story, but a statue. Each year, the right to keep the statue is won by lottery, and the keeper gets to put three wishes in the statue. Those wishes somehow manage to get granted. Not always, but fairly often.

This year’s winner is Phin Baldwin, a reporter at the local newspaper. Phin is from out of town, and he doesn’t believe in wishes. But he won’t give the statue to someone who does believe.

Phin also makes Ginny’s heart beat faster. Well he did. Now he’s making it beat faster out of sheer exasperation. So Ginny starts stealing the statue from Phin, and letting the villagers have it for a day at a time.

Sharing the wishes. Sparring with Phin. And, it turns out, making his heart beat faster.

The concept behind this story, the Magi, the wishes, and the town, and how Phin and Ginny get together, was more than terrific. Ginny finds a way to share the true meaning of Christmas with the whole village, have fun, and get her man. She makes him a true believer too!

Escape Rating  for War of the Magi: A

One thought on “Review: Five Golden Rings: A Christmas Collection”