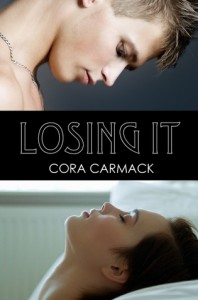 Bliss Edwards is about to graduate from college and still has hers. Sick of being the only virgin among her friends, she decides the best way to deal with the problem is to lose it as quickly and simply as possible– a one-night stand. But her plan turns out to be anything but simple when she freaks out and leaves a gorgeous guy alone and naked in her bed with an excuse that no one with half-a-brain would ever believe. And as if if that weren’t embarrassing enough, when she arrives for her first class of her last college semester, she recognizes her new theatre professor. She’d left him naked in her bed about 8 hours earlier.

Meet cute turns into awkward morning after, compounded with a dose of “when I kissed the teacher” that manages to be sappy rather than squicky, which is difficult. Add in a dose of long-time friend wishing he could make this a triangle, but that just isn’t happening.

Then add in the heroine’s desire to finally get rid of her virginity, as if it’s an out-of-date pair of shoes. Or something like that. Except every time she screws up her courage (no pun intended), or girds her loins (pun definitely intended) she panics.

Bliss is 22, so she is an adult in this story. Awkward about it, but an adult. Also about to graduate college. It’s time for her to spread her wings. She just hasn’t found any guy she wants to spread them for. She overthinks everything. And she likes to be in control.

Sex is all about losing control, and Bliss doesn’t do that very well. At all.

Until she meets this cute guy with a British accent in a bar, and he’s reading Shakespeare. She finally discovers what all the love songs are about. Or at least the lust songs. She takes him home, intending to finally do the deed.

She can’t go through with it. She can’t stop thinking of all the things she might do wrong. All the ways it might become awkward. She runs away, leaving him naked in her bed. She pretends she has an emergency.

The next morning she finds out he’s her new theatre professor. He’s a temp for the final semester. He also lives in the next building over from her. They can’t escape each other. They also can’t escape how they feel about each other.

Because in spite of the really awkward start (epically awkward), they have pretty amazing chemistry together. Yes, on a physical level, but also in every other way. They like each other, they don’t just lust after each other.

Garrett may be her professor, but his days in college aren’t that far behind him. He just finished his MFA, so he’s probably four or at the most five years older than Bliss. But the gap between student and teacher is huge in other ways. Relationships are often forbidden because the teacher has power over the student. Power to give grades, to give easy, or difficult assignments, etc.

So when Garrett and Bliss can’t keep away from each other, they have to keep it a secret. For a whole semester. Which brings an entire roller coaster full of emotions into play.

And in the meantime, Bliss is still a virgin, and has an incredibly difficult time telling Garrett. I did mention she was a theatre student, right? Dramatics all around. Dramatic misunderstandings abound.

And in the middle of it all, the senior class puts on a play. And they all get mono. The course of true love definitely does not run smooth, but it absolutely does manage to run on.

Escape Rating B: Bliss is an endearing heroine in her awkwardness. The opening scene where she runs out on a naked Garrick is hilarious, but also sad.  You want her to be happy, and you’re not too sure at that point whether she’s going to make it past her own insecurities.

Garrick has the patience of a saint. He’s a little, maybe a lot, too perfect. I’m not sure how many real men would have the patience that he does. Not just to wait through the long sexual drought, but to do it without knowing why Bliss wants to go so slow, and to put up with her jumping to so many wrong conclusions in so many different directions. They don’t talk about where their relationship is going, Bliss always assumes the worst. And Garrick patiently puts up with it.

One thought on “Review: Losing It by Cora Carmack”