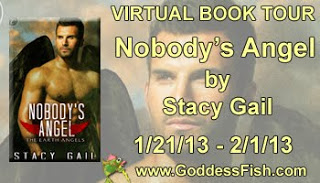 I’m thrilled to welcome Stacy Gail to Reading Reality. Why? Because not only is Stacy the author of today’s featured review (check out my review of Nobody’s Angel for deets) but she also wrote my absolute favorite holiday story for 2012, How the Glitch Saved Christmas (reviewed at Book Lovers Inc.) I not only adored her glitch, but science fiction romance is one of my reading passions.

And writers like Stacy help me live those circuit-filled dreams. So take it away, Stacy!

Angel VS Algorithm—Let’s Get Ready To Rumblllllle!
by Stacy Gail

Before we begin, I’d like to thank Marlene at Reading Reality, for kindly allowing me to stop by and chat about Nobody’s Angel, my latest release from Carina Press, and the first book in The Earth Angels paranormal romance series!

Confession:  When it comes to my heroes, my tastes are…exotic.  Heh. 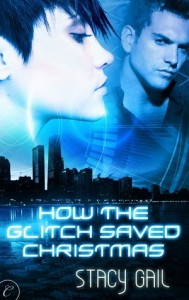 If you don’t believe me, I have proof.  This past December I had a futuristic/sci-fi release in a Carina Press holiday anthology, by the name of How the Glitch Saved Christmas.  It was a fun project, a “gateway” novella to a futuristic world that’s going to tie up the lion’s share of my attention in the upcoming months.  In Glitch, I created Edison Wicke, a smart-mouthed, street-savvy cop, and, oh yeah—he’s a cyborg.  This part-man, part-machine, all-yummy guy had been living in my head for a while, so it was a kick to finally get him out into the world and let him stretch his meched-out legs. 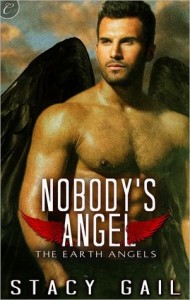 Months before I wrote a single word on Glitch, I’d submitted a very different sort of project to my editor, along with an outline of a four-part paranormal series.  This series, The Earth Angels, would be built around the mythological beings known as the Nephilim—super-powered angel-human hybrids that got wiped out in the Great Flood.  But, since Goliath was supposed to be one of these guys, it’s suggested that some survived that extinction event.  That amazing concept is where The Earth Angels series picks up, with the modern-day, mostly human descendants of those long-ago survivors.  Nobody’s Angel starts things off with Zeke Reece, paramedic by day and masked hero flying through the shadows by night.

The question is, which hero is better? 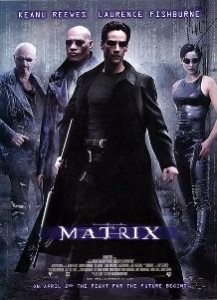 I know, I know—that’s like asking a mother which kid is her favorite. 😛  For me, both Edison and Zeke are totally swoon-worthy in their own ways, so it’s hard to make comparisons.  Since that’s the case, how about we break it down as to what each hero can do?  They both have superhuman strength, speed and endurance (and rest assured, both of their ladies appreciate a man with impressive stamina *straight face*).  Zeke can fly, while Edison can withstand a fall of several stories without breaking so much as a nail (he does, however, break the ground like a meteorite wherever he lands).  Zeke battles spiritual beings and banishes them from this realm to the next, while Edison can search for information at the speed of thought, can see and record in a broad spectrum, from ultraviolet to infrared, and has fighting skills that rival Neo’s in The Matrix.

In my mind, it’s a dead heat.  Whether they were born with some crazy angelic mojo in the DNA, or built in a futuristic lab to take a licking but keep on ticking, these two men haven’t earned the label of hero because of what they can do.  It’s who they are that makes them heroic.  Edison chose to become more than human because he was devoted to the idea of doing his job to the best of his ability—the job of serving and protecting his corner of the world.  Zeke may not have chosen to be born as part of an accursed race, but instead of lamenting that fate he does everything he can to make his world a safer place.  Both would sacrifice anything for the sake of others, and both would walk through hell and back for the women they love.  When it comes right down to it, who wouldn’t want someone like that—a true hero—in their life?

So tell me, do you have a preference? 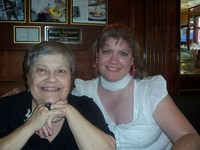 A competitive figure skater from the age of eight, Stacy Gail began writing stories in between events to pass the time. By the age of fourteen, she told her parents she was either going to be a figure skating coach who was also a published romance writer, or a romance writer who was also a skating pro. Now with a day job of playing on the ice with her students, and writing everything from steampunk to cyberpunk, contemporary to paranormal at night, both dreams have come true.

GIVEAWAY: Stacy will be awarding a $25 Amazon GC for the grand prize; and second prize is a Zazzle mug with cover art on front, plus a Starbucks Via coffee pack (US only) to two randomly drawn commenters during the tour, and a $25 Amazon GC to a randomly drawn host. Leave a comment with your email and name in order to enter for a chance to win!